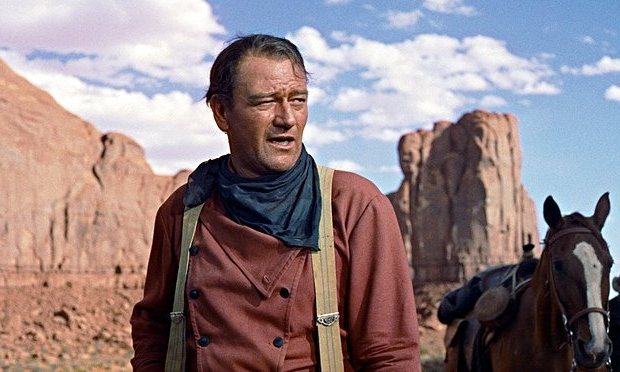 He was the biggest box office star in movies for thirty years, beloved by audiences, yet terribly under estimated as an actor until the years after his death in 1979.  Wayne believed acting was reacting, and if you watch him in his best performances he had mastered what few ever have, the art of listening. When Wayne was in a scene he was ever-present, absolutely there, elevating the work of those around him.

Wayne chose roles that played to his strengths, but every so often he would step out of his comfort zone, sometimes with great results, other times, not. That he was so widely admired and respected by fellow actors and directors is a huge testament to his talents.

Most comfortable in Westerns, it is no surprise his finest twelve performances are dominated with films from that genre.
Wayne would win a single Oscar, earning just one other nomination in a career that should have brought him a second Oscar, and at least another four or five nominations. He was as much an actor as he was an American, a patriot in the truest sense of the word.

He would from time to time wander outside his comfort zone with performances in The Conqueror (1955), a disaster and later in his career after turning down the title role in Dirty Harry (1971) he made a couple of rip offs of the film, placing him in modern-day as a tough cop, both McQ (1972) and Brannigan (1973) failed miserably.

His biggest critical failure would be The Green Berets (1968), a film he also directed, that took a wrong sided look at the war in Viet Nam, Wayne siding with Nixon on Americas place in the war. For the first time in his career he looked naive, even silly, woefully out of touch. He rebounded the following year with True Grit (1969) one of his biggest box office hits, and the film that finally won him an Oscar.

How does one last in Hollywoods from the silent cinema through the seventies without talent? You do not, plain and simple. I remember after he died reading an article that stated John Wayne: American. I would go one better and say Wayne was America, at least the way Americans hoped they could be. In order of preference, here is the list of top John Wayne movies that showcase his talent.

His greatest performance, the best performance by an actor in 1956 and one of the cinema’s greatest, Wayne is an emotional tornado as Ethan Edwards. When his brother’s family is massacred, his nieces kidnapped, Ethan goes looking for them, a funnel cloud of fury and hate. He finds Lucy, dead, having been raped but continues looking for years for little Debbie. It becomes clear though, that Ethan is not looking to find the girl and bring her home, because she is now a teen, living with a Buck in his words, he plans to kill her. But finally face to face with his niece, his blood, daughter of the woman he loved, he cannot kill her. Lifting her high over his head as he did when she was a child, he sweeps her into his arms and takes her home. Never had Wayne portrayed a man filled with such rage, never had his eyes been so cold, so filled with hate. Watch the scene where he sees the women brought back from the Indians, their minds gone, he has no pity for them, and only hate for their captors. It is a towering, dark performance that should have won him his first Oscar. A masterpiece directed by a John Ford.

“I’m a dying man…Afraid of the dark” he tells his frightened landlady, after she discovers he is a legendary gunfighter, J. B. Books. Diagnosed with cancer in the year 1901, the old west is dying, slowly, but like him dying nonetheless. He comes to the growing city to see a doctor he trusts, and is given the news. As people descend on him, all hoping to make money on his name, the good widow and her son find compassion for him, realizing he has no one. Books does not want to die the death he knows is coming, and formulates a plan to thwart that. Wayne is superb in the film, one of the last great Hollywood westerns. He was struggling with the return of cancer at the time of the shoot, and riches deserved an Oscar nomination that did not come.

Howard Hawks directed this epic western about a long cattle drive that becomes a Mutiny on the Bounty tale between father and step son. Thomas Dunson (Wayne) is a hard-bitten cattleman, who with Matt, the boy he found wandering after his family was killed by Indians, builds a massive cattle empire. Know the need for beef in the north, they drive the herd there, but there is trouble on the trail. More and more Matt sees his fathers cruelty, until finally he cannot take it and seizes the herd, leaving Dunson on his own. What Matt does not count on is Dunsons fury, and he follows his son, finally finding him. Wayne is outstanding in the film, portraying older than his years, brilliantly so. This should have been his first Oscar nomination.

True Grit is courage. Riding into a meadow, Rooster Cognurn (Wayne) is outnumbered four to one by a group of very dangerous cut throats he knows all too well. Sizing them up, does he back down? No, with a twirl of his rifle he marches on, like an old Knight about to joust. Taunted as a “one-eyed fat man” he takes draws another weapon in the other hand, armed now with his rifle and pistol, takes the reins in his teeth and charges at them, guns ablaze. That is true grit. Wayne won his Oscar as Rooster, the one-eyed, over the hill Marshall hired by a young girl to find her fathers killer. He gives a great near mythical performance, larger than life, playful, outstanding.

Working with the great Howard Hawks again, this film was the first and greatest of the formulaic westerns that were to follow. How good is it? Near perfection, it has excitement, comedy, a love story, redemption, honesty, and a great gunfight between the good guys and bad guys. Wayne is excellent as John Chance the Marshall of the town who throws the brother of the local bad guy in jail, knowing that will bring his nasty brother to town with his army of guns. With the town drunk trying to get off the booze, and old man who loves dynamite and a hotshot young guy with a gun, Wayne and his band of misfits go to war. The film was a comeback of sorts, a sneer directed at High Noon (1952) which Wayne despised, not believing a Marshall would fear the bad guys arrival on the train. Maybe, maybe not, but he is terrific in the film, and the picture is a classic.

John Ford directed this picture, one of the great love stories in movies. Shot on location in Ireland, the beauty and colour of the rural landscape becomes another character in the film. Wayne is Sean Thornton, a pro boxer running from a tragedy in the ring who falls in love, falls hard for Mary Kate (Maureen O’Hara) sister of his nemesis. She is angry he will not fight for her dowry, he does not believe they need it, and being Ireland it builds to a proper Donnybrook. Thornton does not want to fight, having killed a man in the ring, but there is no other way. He beats her brother, earning his admiration and respect, and wins the love, forever of the fiery redhead he adores. The chemistry between Wayne and O’Hara onscreen was known by audiences and critics alike. A funny, lovely love story.

Again playing a man older than his actual age, Nathan Brittles is a soldier about to retire, accepting in last dangerous mission before he takes rest in retirement. With streaks of grey in his hair, the look of both weariness and melancholy etched on his face, he has seen too much, done too much and seeks peace. John Ford directed the film, once again guiding the actor to one of his best performances, inherently understanding what Wayne did well. He deserved to be nominated for this performance in 1949 rather than Sands of Iwo Jima. A beautiful melancholy film about aging, and life.

This huge passion project for Wayne took several years to bring to the screen, and he would direct, produce and act as Davy Crockett, likely the only actor of the right age to do so. By the time he came to Texas to fight, Crockett was in his fifties and a legend, having been a senator! Filmed with care for authenticity, a passion for realism and a burning desire to create a film about freedom, patriotism, and love for one’s country, the lead up to the battle is filled with little moments, the best ones with Wayne, who is superb as Crockett. As a director he needed to give the film a cohesive narrative rather than fine small moments strung together before the big climax. His performance is the best thing about the film, carrying it on his large shoulders.

Nominated for his first Academy Award for his performance here as Stryker, the tough marine readying his men for war. Toughening them up for what he knows they are going to face, his men fear him as much as they love him. What they come to learn is that Stryker would die for each of them. In many ways this performance was a prototype for the many tough marines we have seen since. The film is the most dated of his career, but his performance works to this day. That said, this was not even his best performance of this year.

More for the sheer chemistry between Wayne and Katherine Hepburn, this odd remake (sort of) of The African Queen (1951) offered Wayne the chance to work with one of the greats, and despite a weak screenplay, the sheer chemistry of the two makes the film entertaining whenever the two are together onscreen. Wayne is again terrific as Rooster, befuddled by Miss Goodnight (Hepburn), yet filled with admiration for the gutsy lady, who thinks of others before herself. Their last scene together hints of a love story yet to come, and talk of a film called Someday was discussed with the pair. That scene by the way, displays Wayne’s great gift for listening.

Pure entertainment, great fun with Wayne stepping outside his comfort zone into an adventure film, and a rip-roaring good time. As the leader of a group who trap and bring back big game in Africa to zoos in America, he stands as tall here as he did in any western. Watching the actor lead the men against powerful wild animals is great fun, and Wayne is obviously having a blast in a very different kind of film. Hawks being Hawks knows his anchor is Wayne and he builds the film around him, though there is a fine supporting performance from Red Buttons. Fun change of pace, with Wayne solid as the hero on the African plains.

Though a supporting performance his presence looms large throughout. Times are tough for his rancher, so he hires young boys, teenagers or pre-teens to work for him. The boys watch in horror as Long Hair (Bruce Dean) cowardly shoots their boss in the back after the older man beats him relentlessly. Murdered in front of the boys, they vow to avenge him and deliver what he hired them to deliver. Even after that shocking moment when Wayne is gunned down, we feel him through the boys, who saw the man as their protector and surrogate father. The film was a huge success, though made it rough for Bruce Dern for a while.