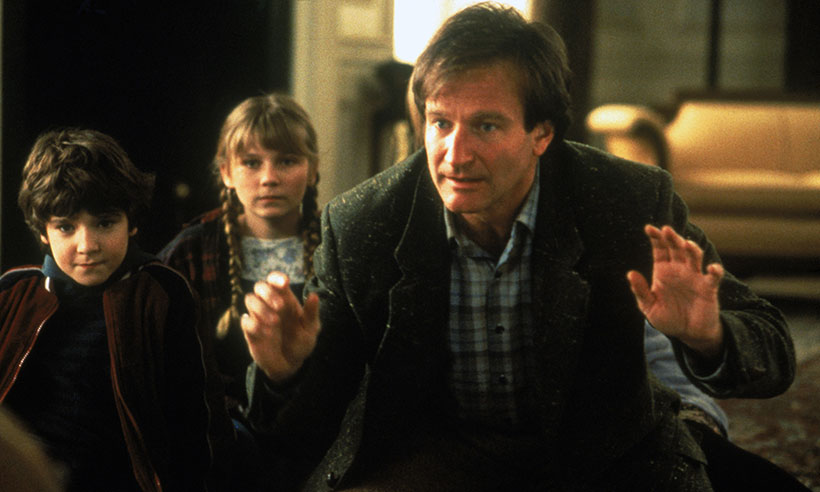 Based on the book of the same name by Chris Van Allsburg, ‘Jumanji‘ is a 1995 children’s adventure film which managed to capture the imagination of film audiences as soon as it released. Robin Williams plays the leading role of Alan Parrish brilliantly, and his natural comic timing hits the mark every single time. Interestingly enough, Williams did not agree to do the film after the first draft was sent to him, and it was only after extensive rewrites that the actor decided to take on the project.

The digital effects which we see in the film were quite ahead of its time. Notably, a new software called iSculpt was created for the film so that the makers were able to put human expressions on the faces of several wild animals which we see throughout the course of ‘Jumanji’. We are here to inform you about the ways in which you can watch ‘Jumanji’ online. But before that, let us take you through what the film is actually about:

What is Jumanji About?

Jumanji is actually the name of a game which two kids, Judy and Peter Shepherd, manage to discover one fine day. What they do not know is that twenty-six years ago, Alan Parrish and his best friend Sarah Whittle got trapped inside this very game while playing it. Thus, after Judy and Peter open up the game and start playing, they eventually come across Alan and Sarah. In each of its steps, the game throws its players into a jungle-like surrounding full of dangerous wild animals from which they have to escape. The four people now playing the game are determined to complete it so that all the destruction it has caused is reversed. They go through several challenges, some of them even life-threatening, in order to finish the game.

Is Jumanji On Netflix?

Netflix is the most popular streaming platform in the world, and its collection of films and TV shows is something that caters to everyone’s taste. Netflix’s content ranges from original productions to movies and shows collected from different parts of the world. However, you will not be able to stream ‘Jumanji’ on Netflix right now. But if you are interested in watching some adventure movies on Netflix, you can choose from titles like ‘Men In Black‘, ‘Indiana Jones And The Last Crusade‘, and others.

Is Jumanji On Hulu?

Despite Hulu boasting of an envious collection of content from all over the world, ‘Jumanji’ is not available on the platform as of now. But Hulu can offer you the pleasure of watching various adventure movies like ‘Hunt For The Wilderpeople’, ‘Embrace Of The Serpent’, ‘The Prince Of Egypt’, and others.

Is Jumanji On Amazon Prime?

Amazon Prime is the only streaming platform which can give Netflix a stiff competition with its range of amazing content, both original and otherwise. However, ‘Jumanji’ is not available on the platform right now. Instead, you might want to check out other similar titles like ‘Mulan‘, ‘The Adventures Of Tintin’ and others on Amazon Prime.

Is Jumanji On Disney+?

Since its arrival, Disney+ has managed to post a stiff competition to the popular streaming services because of its vast catalog of hugely popular original titles. Though ‘Jumanji’ is not available on Disney+, you can check out other adventure movies on the platform like ‘The Lion King‘, ‘Avatar‘, and so on.

Where Can I Stream Jumanji Online?

We regret to inform you that you will not be able to stream ‘Jumanji’ online anywhere at the moment. However, if you still wish to watch it without going for a hard copy of the same, you can rent the film from various sources like Amazon, FandangoNOW, YouTube, iTunes, Google Play, and others. The rent ranges from $2.99- $3.99. If you wish to buy the film, there are also numerous options available. You can log on to PlayStation, iTunes, Amazon, Microsoft Store, Vudu, and others for the same. The price of the film’s soft copy ranges from $9.99- $13.99.

Is Jumanji Available on DVD and BluRay?

Yes, the DVD and BluRay of this 1995 comedy-adventure films are readily available in the market. If you wish to order them online, head over to Amazon for the DVD and to BluRay’s website for the BluRay hard copy of the film.

Where Can I Watch Jumanji For Free?

Sorry, freeloaders. ‘Jumanji’ is one of the most popular adventure films for kids and there is no legal way to watch it without paying for the same. We would like to take this opportunity to ask you to pay for the entertainment that you receive and go for the many options in which to watch this film as listed above.