Does ‘Jumanji: The Next Level’ Have a Post-Credits Scene?

‘Jumanji: The Next Level’ is the sequel to the successful 2017 reboot titled, ‘Jumanji: Welcome To The Jungle’. Of course, if you have been following the franchise, you might have seen the 1995 movie, ‘Jumanji‘, starring the late Robin Williams. Ever since the reboot, the rules of Jumanji have changed, insofar, as we see that it is a video game now, and people get sucked into the world of Jumanji.

The new movie pretty much follows the same plot format as the 2017 movie with the group of friends going after Spencer to save him. However, this time Spencer’s grandfather, as well as his old friend, get sucked into the game leading to some body-swapping fun. The rest of the film follows the more experienced gamers showing the ropes to the old men, as they struggle to survive the challenges and dangers of Jumanji, vowing never to return after they escape the game once again.

Although they might be done with Jumanji, Jumanji is not done with them. The mid-credits and post-credits scenes make it abundantly clear while setting the franchise up for another exciting installment. Understanding what happens in these scenes, and their significance will help you put ‘Jumanji: The Next Level’ in the proper context. So don’t leave the hall until the end, and you will be in for a swell surprise.

Jumanji: The Next Level Mid-Credits Scene:

In the mid-credits scene in ‘Jumanji: The Next Level’, we see the character played by Lamorne Morris, who goes into Spencer’s basement. Morris plays a repairman, who accompanies Spencer’s mother. This is where he comes across the Jumanji console. The repairman is immediately drawn to it despite protestations from Spencer’s mother. He claims to have been a gamer at one time. We do not exactly see what he does to it, but he seems to touch it.

The scene immediately cuts to Nora’s diner. We see an ostrich from the game running along the snowy landscape. Soon, the lone ostrich is followed by a wild herd stampeding on the streets, shocking Spencer and his gang. While we do not know what happens to the repairman or Spencer’s mom, the ostriches that were causing problems for the players in-game, seem to be back.

Jumanji: The Next Level Post-Credits Scene:

The post-credits scene is not exactly a visual scene but enforces what we see in the mid-credits sequence. We hear the sounds of drumming, which is characteristic of the game and its approaching danger, as well as ostriches, as the movie comes to an end. 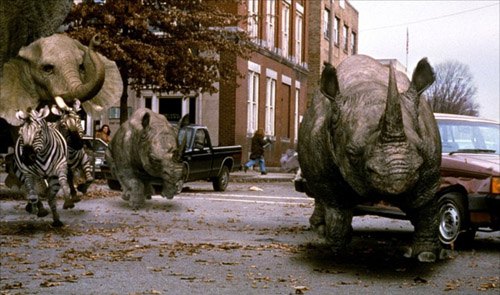 Now that we know how the mid and post-credits scenes play out, we come to the most crucial question – what it means for the ‘Jumanji’ franchise. Anyone who has seen the first movie must have immediately made the connection when the herd of ostriches was seen running in front of Nora’s diner. It means that the world of Jumanji has invaded our real world.

The 1995 movie showed the game working in pretty much the same way, which meant that stakes were higher as lions, monkeys, bats, and carnivorous vines invaded our realm. It would appear that the upcoming ‘Jumanji’ movie will deal with the same problem. Furthermore, for the protagonists who did not want to return to the world of Jumanji, they now have to deal with Jumanji coming to them. It sets up for an interesting premise where the characters from the game could be brought to the real world and could interact with the players who played as them. One only needs to recall the big game hunter who was brought out from the game to the real-world in the 1995 film.

Moreover, we realize by the end of ‘Jumanji: The Next Level’ that Nora, who owns the diner, is Nora Shepherd, the aunt of Judy and Peter Shepherd from the 1995 movie. Bebe Neuwirth, the Broadway veteran, reprises her role. Although her fate was unknown at the end of the first movie, her reappearance has become one of the most prominent elements from the original movie that has been brought to the reboot series. If we are lucky, we could see a grown Judy and Shepherd returning to the next installment as well. Kirsten Dunst plays Judy in the 1995 film, and might even reprise her role. Recently Kevin Hart and Dwayne Johnson, fellow cast members in ‘Jumanji: The Next Level’, also teased that some new star could be on board for the next film. Names like Emily Blunt, Chris Hemsworth, and Tom Cruise were put forth.

The upcoming film could very well see the players of the old game, and the new one, coming together to stop Jumanji’s invasion into the real-world. Things seem to have come back full circle for the franchise, as it is now directly linked to the first ‘Jumanji’ movie. With the pieces in place, the upcoming film needs to be careful in the direction they push the plot because the premise will essentially be the same as the 1995 film. That being said, ‘Jumanji: The Next Level’ manages to be fun despite following the same premise as the 2017 reboot, so we have high hopes for the upcoming installment, teased by the mid and post-credits scenes, as well.