If there exists a school of thought that marries commercially viable blockbuster cinema with well made, thoughtful cinema, then Steven Spielberg would be at the spearhead of it. The maverick director has a celebrated string of films to his name, equal parts well-made and entertaining, a lot of them even frontrunners at the academy and a handful of them among the best films ever made. The father of the modern Hollywood blockbuster, in my opinion, Spielberg has entire franchises that owe their success to the man. One such franchise is the ‘Jurassic’ franchise, now five films old with the latest installment just hitting screens earlier this year.

As with all other franchises that continue their run into the 21st century from the golden decades of Hollywood, the ‘Jurassic’ franchise too seems to be out of fuel as of now, and worryingly so, out of enough reasons to justify its continued run, except the cash of course. However, guilty as charged, the thrill of watching a prehistoric creature recreated in stunning 3D on the big screen is quite unparalleled. With the first Jurassic Park film, Spielberg tapped into something so unprecedented that a series of films with essentially the same idea at their core would go on to fetch billions in moolah at the worldwide box office. That, I believe, is what gets the audience to the theatres continually, every time a ‘Jurassic’ film hits screens. So, without further ado, here’s the list of all Jurassic Park movies, ranked from worst to best. You can watch some of these Jurassic Park movies on Netflix, Hulu or Amazon Prime. 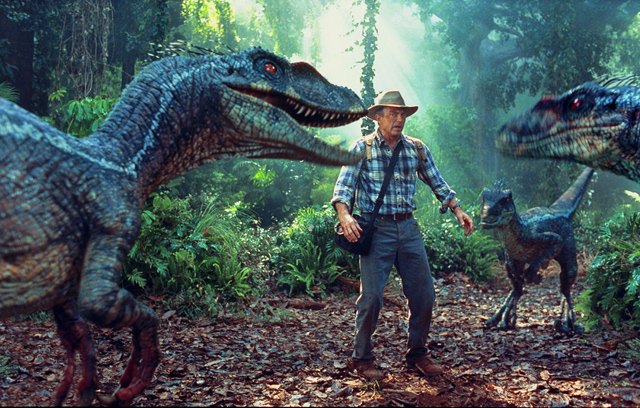 Definite unanimous votes on this one, I suppose. As with virtually all the other Jurassic films on the list, the film, while not completely bad, is at the receiving end of a franchise that got hot because of its concept and groundbreaking use of technology and execution, but continued its gradual decline on account of the creative department. In a lot of ways, I feel that is inevitable. With the third film in the franchise being directed by Joe Johnston, one definitely does feel the hand of Spielberg missing.

The film is darker than the previous two, but the suspense just doesn’t build up with the same tension as it did in the previous installments. That’s not all of its problems though; the characters and their dialogues are contrived in a way that never lets them develop more than an intended one film venture, except Sam Neill who stands out and does a good job. A LOT of the scenes are completely rehashed from the first one, and a lot others are completely ridiculous to the point of not mentioning. The franchise was thus put into involuntary limbo following the release of this film, only to be revived roaring with $1.6 Billion at the box office 14 years later. 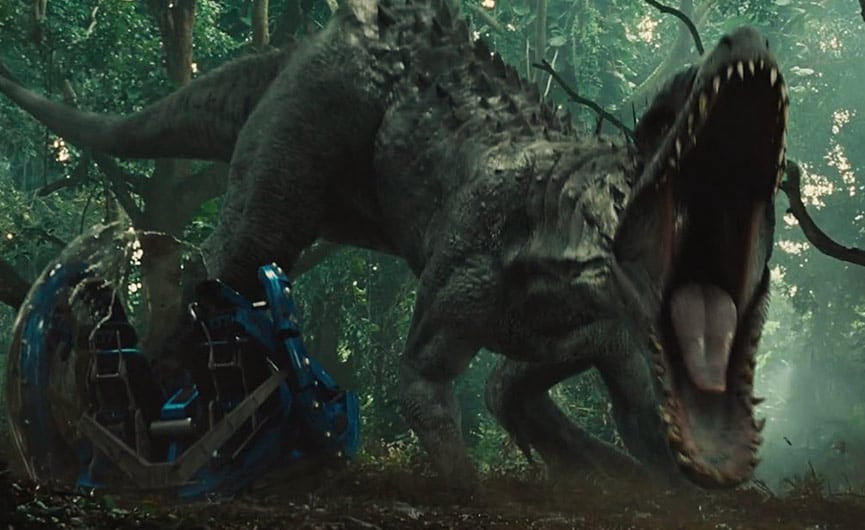 There is perhaps no easier, more polite way to say this, ‘Jurassic World’ was a cash grab, milking heavily from the nostalgia cow of Spielberg’s dream vehicle of the 90s. However, I see a wonderful dichotomy at the core of this: the reanimated dinosaur-themed adventure park in this film after the old one was shut off for good, is exactly that as well. The ‘Jurassic World’ in the film on Isla Nublar is reopened with the intention to milk the nostalgia of the older park. Talking about the film, there were more product placements in the film than actually, genuinely awe-inducing moments.

To give it fair credit, however, the film’s new breed of genetically modified and bred dinosaur, the Indominus Rex is a terrifying creature and looked gloriously fearful on the big screen. Some of the scenes with the Indominus where it learns to adapt and fight, and its final fight with the T-Rex are defining moments on the film, and technically brilliant. Chris Pratt adds some valuable fresh breath to the film’s happenings as the leading man here, and his scenes of bonding and training with the raptors are extremely special. The public flocked to the theatres in unprecedented numbers when the film came out, especially here in India, such was the pull of the nostalgia; one that turned out to be worth $1.6 Billion at the box office. 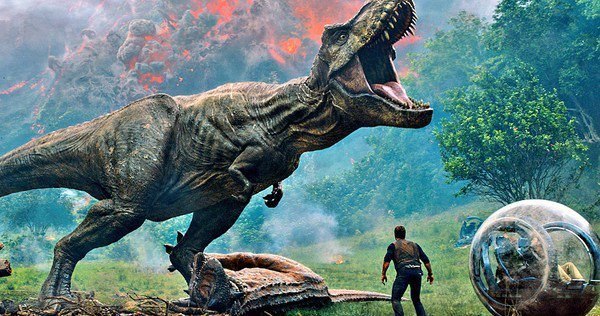 The complaint about this year’s ‘Fallen Kingdom’ taking itself too seriously is not completely wrong either. In the process of floating away from the unabashedly commercial nature of the first film, it is torn somewhere in the middle. On the bright side though, it toys around with some brilliant ideas about the relationship between humans and animals, and frequently plays along blurring the very fine line of what distinguishes them from us; the scenes between Pratt’s Owen Grady and Blue, the velociraptor from ‘Jurassic World’ are especially laden with a lot of pathos.

The scene of the volcano explosion somewhere midway along the movie, while lasting for a few minutes, also always had me at the edge of my seat. The film, thereby, has a lot more scenes that are a victory on the technical and effects front, but not many on the story front of it. There will be several moments in the fifth instalment of the franchise when you wonder how many more films would it take for the humans of this franchise to stop messing around with something they can’t seem to fully understand and control either! However, while pondering over the question, if you care to indulge yourself with a drink and some popcorn in front of an IMAX screen, I can guarantee that those will be two hours well spent, and that, again, is essentially what keeps this franchise going, if you come to think of it. 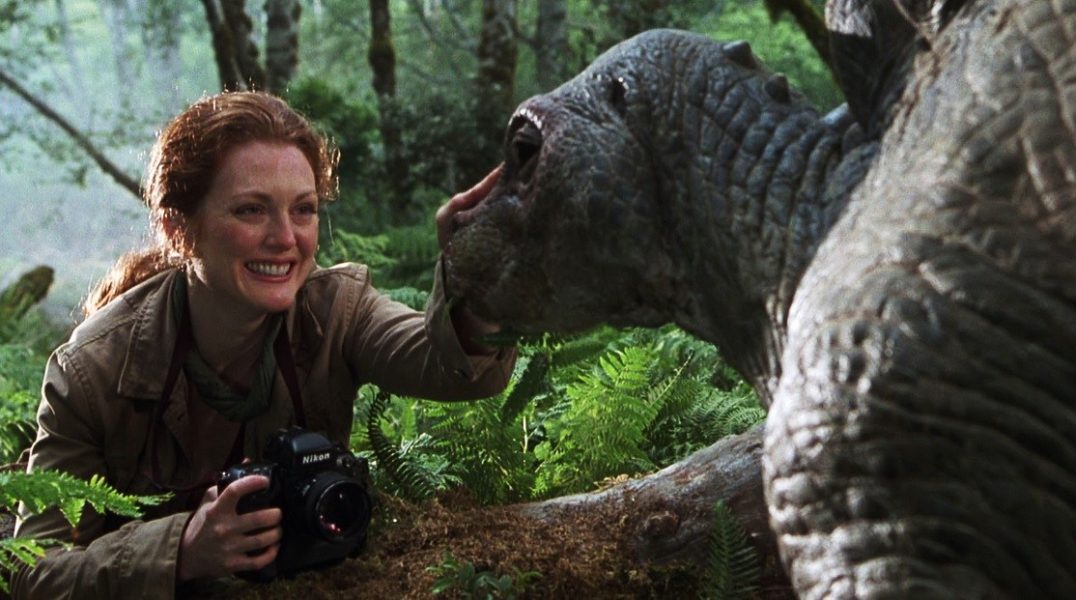 In a lot of ways, I believe this film has been subjected to a lot of harsh judgment solely on account of being the sequel to a highly original blockbuster. Even though it was directed by Spielberg himself, and had all the trappings of what made the first a success, this could not have possibly beaten the status of reverence that the original had acquired and cemented in the four years between the release of the two films, even if it would have been hypothetically the best film ever made. Overstatement, but I hope I am getting the point across.

For what it is, I agree that ‘Lost World’ does suffer from some problems, but is nothing to warrant a 6.5 on IMDb. I wouldn’t put it into the guilty pleasures category either, because it’s certainly better than that. The addition of Julianne Moore and Vince Vaughn to the cast, along with Goldblum reprising his role from the original is a definite plus, and the film sure does benefit from a change of setting in the second half. The scenes where the T. Rex goes on a citywide destructive rampage are especially fun to watch. An overall win on essentially the same departments as the first, albeit darker in tone and marred by some loopholes in the script, divulging storylines and the unnecessary pressure of being a sequel to a wildly successful film. 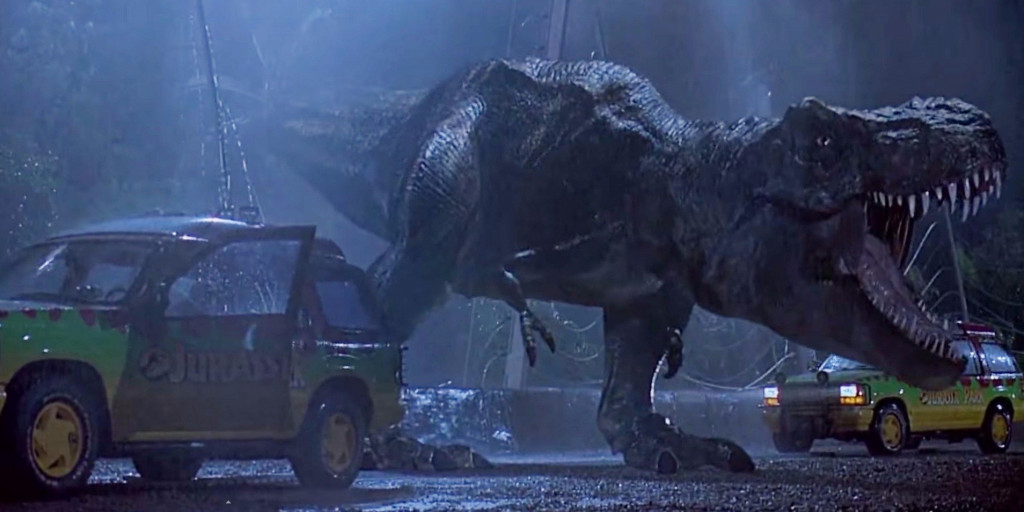 The one that started it all. I sincerely believe it will be a futile effort to put down in words why the original ‘Jurassic Park’ is the best one from the franchise. Yet still, I try. In 1993, when you use special effects to recreate physical aspects of beings that existed millions of years ago, and make them walk among humans, it is considered groundbreaking, simply for the lack of a more descriptive term.

Spielberg’s visionary project, adapted from Michael Crichton’s eponymous novel was epic in every sense of the word, the most definitive blockbuster of the 90s, and not to mention, a very well made film as well and an overall technical triumph, and all of that is apart from the extensive nostalgia value it holds to-day. The original Jurassic Park theme by John Williams is still as hair rousing as ever, and Jeff Goldblum’s (always a delight to watch) “Life, ‘uh’ finds a way” is etched into the collective conscience of people, and I assume it will be for long.  This is what makes the original stick out even so many years hence; call it the thrill of a first time or plain good filmmaking, the magic never fades irrespective of the number of repeat viewings.