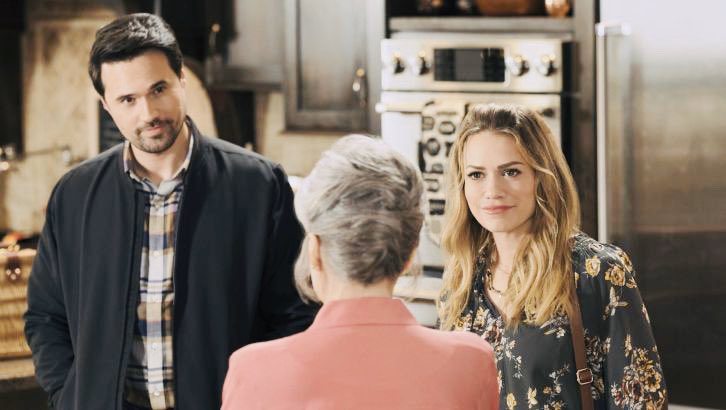 Hallmark Channel’s guiding philosophy has been to provide viewers with a consistent stream of warm, feel-good movies every season. It is not surprising that the network regularly comes up with a slate of television movies for spring: arguably the most charming season of all. Hence, the title of the Hallmark film, ‘Just My Type’ could very well connote how befitting the movie’s inclusion would be in the ‘Spring Fling’ slate.

To begin with, the film’s premise itself incorporates picturesque backdrops of lakes and mountains, thereby making the movie tonally attuned to the season. To be clearer, a large chunk of the film is set in a beautiful rural town. However, unlike most Hallmark movies, ‘Just My Type’ isn’t just a small-town story.

The movie follows Vanessa Stills as she heads to a non-urban place for the interview of her lifetime. She is a “pop culture writer and an aspiring novelist.” The interview that she manages to score is one with a prominent mystery writer named Martin Clayborne.

Clayborne is depicted to be a reclusive artist: one who lives in a place nestled in Mother Nature, with little connection to civilization. When Stills interviews Clayborne, she begins to question her own life decisions. Has she subconsciously given up on her own dreams?  Clayborne urges Stills to chase her dreams without fear of consequences and go all in. However, it is only after Stills returns home and receives a gift from the author that she decides to take his advice.

Obviously, Clayborne and Stills develop feelings for each other. However, ‘Just My Type’ does not limit itself to being just a rom-com. It is also a movie about self-discovery and chasing your ambitions. It is uplifting, cozy and will make one spring into action from the comfort of one’s couch.

Just My Type Cast: Who is in it?

‘Just My Type’ is yet another Hallmark movie that stars several known faces from the network’s other ventures. To begin with, Bethany Joy Lenz plays the character of Vanessa Stills. Lenz is best known for starring in ‘One Tree Hill‘ and the soap opera, ‘Guiding Light.’ Apart from that, she has also appeared in several Hallmark projects like ‘A Valentine’s Match.’

On the other hand, Brett Dalton plays the role of the mystery author, Martin Clayborne. He is best known for playing Grant Ward and Hive in ‘Agents of S.H.I.E.L.D.’ Moreover, Dalton has also been a Hallmark regular, having starred in projects such as ‘Cooking With Love‘ and ‘Once Upon a Christmas Miracle.’ Apart from Dalton and Lenz, Michele Scarabelli and Rebecca Olson are also a part of the film’s cast.

‘Just My Type’ is primarily set in a quaint, rural town. As mentioned earlier, the setting serves a major role to the premise of the film. It directly affects the plot and the journey of each character. Hence, it is natural for viewers to wonder where the movie had been filmed. However, details regarding the filming locations of ‘Just My Type’ have been scarce. Hence, we do not know for certain where the movie was shot. Yet, we can try to make an educated guess.

Several Hallmark projects are filmed in Canada. For instance, the period romance series, ‘When Calls the Heart’ is filmed in Langley, British Columbia while the television movie, ‘A Shoe Addict’s Christmas‘ was shot in Winnipeg, Manitoba. The Candian government offers lucrative tax credits that help producers filming in the country in cutting down their budgets significantly.

Read More: Where Was Bottled With Love Filmed?