When Does Just Roll With It S02 Come Out? 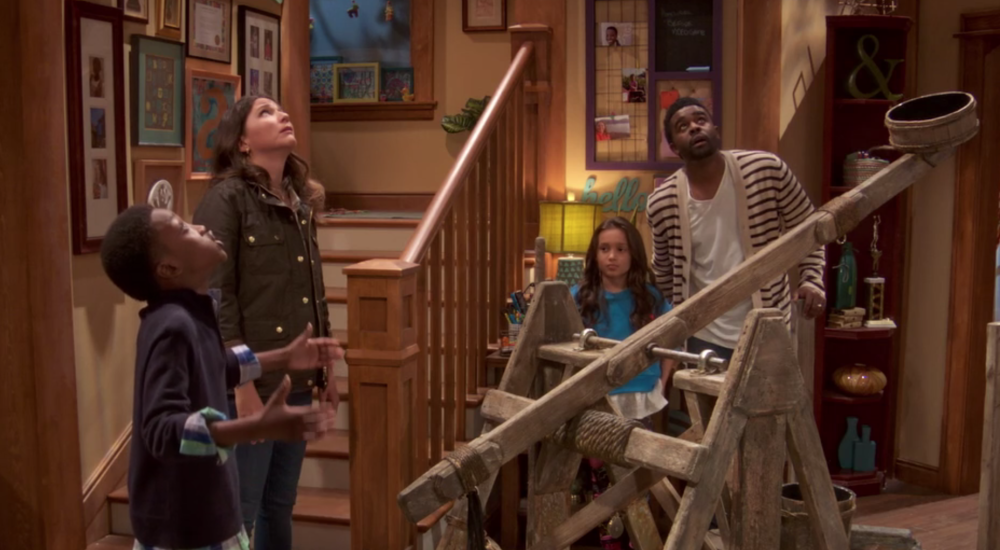 We love family sitcoms and improvisational comedy. So, when these two come together, we get one wonderful hybrid series, aptly titled ‘Just Roll With It’. Disney’s multi-camera situational comedy is an ambitious project that offers a unique amalgamation of these two genres. The scripted show is filmed before a studio audience and it revolves around the blended Bennett-Blatt family.

Created by Adam Small and Trevor Moore, the first season of the show was quite a success. And here’s all you need to know about Just Roll With It season 2.

Just Roll With It Season 2 Release Date: When will it premiere?

The show is one of the most ambitious projects from the network that has an unconventional approach, and hence, it opened to overwhelming audience response. Therefore, we were always hopeful that the creators would opt for another season soon enough.

“Adam and Trevor, along with the talented cast, crew and creative team at Just Roll With It, have exceeded our expectations and delivered a true one-of-a-kind series. The hilarious scenarios voted on by the studio audience, along with the improv elements, create an unpredictable, fun and exciting show for viewers and we can’t wait to see what new surprises are in store for next season.”

Just Roll With It Cast: Who is in it?

‘Just Roll With It’ stars Tobie Windham, Suzi Barrett, Ramon Reed, and Kaylin Hayman in the lead roles. Famously recognized by Disney XD fans as Uncle Will on ‘Walk the Prank’, Windham has featured in multiple theater performances such as ‘American Buffalo’, ‘Hamlet’, ‘The Brothers Size’, and ‘Seven Guitars’.

Actress and writer Barrett is best known for her roles in ‘Kirby Buckets’, ‘Mascots’, and ‘Drunk History’. Reed became a recognized name after he starred as Young Simba in Broadway during the touring productions of ‘The Lion King‘. Rounding up the cast is Hayman, who is known for her appearances in ‘One Day at a Time‘ and ‘The Mick’.

Just Roll With It Plot: What is it about?

‘Just Roll With It’ is centered around the Bennett-Blatt family. Blair and Owen are step-siblings who are polar opposites of each other. Blair (Hayman), a rebel without a cause, is the daughter of Rachel (Barrett), a disciplined, strict ex-military mom. Owen (Reed) is a natural-born athlete and is extremely organized. He is the son of Byron (Windham), a creative and charismatic host of a morning radio show. Byron and Rachel are happily married and fun-loving newlyweds. And with an idea to explore their funny side better, they decide to launch their own show in their home.

The four of them perform in front of a live audience and at the sound of a horn (which can be blown anytime and is totally unpredictable), retire from their scenes and reach backstage. Meanwhile, the audience decides via electronic votes that what would be their next three outrageous acts. After the actors are back on stage, they continue to perform their original scenes, having no idea about what is coming next.

The next tasks could be anything — from being compelled to devour something gross (a raw sardine, a live grasshopper, or an ice cream burrito) to enduring funny psychical challenges or being surprised by an awkward guest star, falling out of nowhere, right through the roof. They need to enact the comedic scenarios while trying to continually improvise on them. The show is produced by Rachel in the couple’s hometown, Akron, in Ohio. Meanwhile, in the midst of all the action, Owen and Blair need to learn to live in harmony and behave as proper siblings.

‘Just Roll With It’ is definitely a not-to-be-missed comedy because it features a unique approach of blending traditional sitcom with impromptu improvisation elements. As apparent from its name, the performers actually need to ‘just roll with it’ and the whole combination is a hilarious experience, both for the live audience and for viewers sitting at home.

Jonas Agin, vice president of the original series for Disney Channel, expressed his views about the show, saying, “The multi-camera sitcom format has worked as a staple of TV for decades. So naturally, we aimed to totally upend it. By introducing an element of audience-interactivity that subverts the expectations of not only the viewers but also the cast, ‘Just Roll With It’ is a true step in the evolution of comedic storytelling.”

Season 2 will pick up the story right from the finale of season 1, with the Bennett-Blatt clan being finally rescued from the sea. But they come across Rachel’s mischievous and somewhat unpredictable dad, who is a devoted but unruly Grandpa. He has been banished from his retirement home and needs to reunite with his fam. Disney sheds further light on the upcoming season in its official synopsis, which says:

“The season also includes “wild” animals, real-life wedding vows with legal matrimony as part of a storyline and feats of epic proportions. The studio audience votes for wacky scenarios that the cast must improvise their way through during the show taping.”

Just Roll With It Trailer:

While we wait for season 2 to hit tv screens, check out the season 1 trailer to refresh your memories: