I wouldn’t say that the anime adaptation of ‘Kaze no Stigma’ is absolutely atrocious, but it’s one of those anime that is so typical and cliched that it slowly sinks, leaving behind no trace of its existence. It presents ideas that have been repeatedly used by many other shounen anime series. The result of which is yet another tale that has been told before with the same wit, the same animation styles, the same characters and most of all, the same basic premise. It does make an attempt at standing out initially, but eventually, things go downhill.

Most action anime fans would be able to judge from the first few episodes itself that ‘Kaze no Stigma’ is like a broken stereo on repeat that just keeps playing out things you’ve seen a dozen times before. And just when you start believing that the show cannot get any more annoying, the fillers come in and your patience with its 24 episode format is tested to its limit. Even the villains just suddenly appear out of the blue; they get defeated and with no continuity, the anime just moves on to a new scenario. Midway through the series, the lack of originality gets really bugging and I’m sure that it’s around this time, many fans decided to give up on it.

At this point of time, if you haven’t seen the anime yet, you must be wondering why you should even think of investing your precious time on it. There’s only one thing that helps you get through all the 24 episodes of the show and that is its characters. Now I have mentioned before that even the characters of the anime are very typical but what’s great about them is that their personalities are very likable and also, each character just fits in perfectly with the overall mood and tone of the show. The individual development of the main characters and also the development of relationships between them are highly commendable.

My overall view of ‘Kaze no Stigma’ is rather bittersweet and in this case, it’s actually more bitter than sweet. It would be wrong to say that I did not enjoy the show at all because there were some really fun moments. But I would never say that the show was a mind-blowingly good experience. I feel that’s it’s one of those shows that will be forgotten sooner or later; but when I say this, I have nothing against anyone who had a great time watching it. If you are into the action-romance kind of anime shows, then just give this one a try. You might just enjoy it as much as some anime fans did.

Kaze no Stigma Season 2 Release Date: When will it premiere?

‘Kaze on Sigma’ season 1 premiered on April 13, 2007 and went on till September 21, 2007. It had a total of 24 episodes. Soon after this, many fans who actually enjoyed the show started signing petitions to make sure that the creators would somehow hear them out. But anyone who has been following the world of anime for quite some time now will know that this approach never really works. Now it has been close to a decade since the release of the first season and all that we have heard about it are some rumors that don’t even make sense.

This brings me back to what I had mentioned earlier in this post. ‘Kaze no Stigma’ is not bad at all but it offers something very similar to other shounen anime out there. I also mentioned that it’s not the kind of anime that remains popular for too long and that can be clearly seen now. The only thing that seems to be in favor of a new season is the fact that the manga has covered a lot of ground by now. There is a whole lot of source material that can be used for adaptation. But even then, from what it looks like, no other factor is in favor of ‘Kaze no Stigma’ season 2. While the odds seem very low, there’s no harm having some hope. So the ones who still desperately want a season 2, all you can do is pray that the creators will somehow find their way back to it in the future. Till then, you can either start reading the manga or you can also go through our list of anime that covers some of the best ones of the Shounen genre. If we come to know about ‘Kaze on Sigma’ season 2 release date, we will update it here.

The English Dub of ‘Kaze no Stigma’ is available on Funimation, Amazon Prime, Hulu, and Crunchyroll.

‘Kaze no Stigma’ centers around a character named Kazuma Yagami, who was once the eldest son of the Kannagi family. But later when everyone discovers that he has not inherited the ability to use “Enjutsu”, the power of controlling flames, he is outcasted by everyone in his family. Even after knowing about his inability to use any powers, his father asks him to compete for the “Blaze Lightning Supremacy” of the family. His 16-year-old second cousin easily defeats him in this competition to be the heir of the “Enraiha”. Infuriated by his weakness and his lack of any magical skills, Kazuma’s father banishes him from the family.

A few years after this incident, Kazuma returns and this time, he is the master of “Fujutsu”, which is an ability that allows him to control the wind. But as soon as he arrives, someone else with similar abilities starts killing the members of his family. Though innocent, everyone starts pointing fingers at him and simply assume that he is now seeking revenge for his banishment. This leads to many members of the family challenging him into battles but the only person he wants to battle is his own father, who is known to be the strongest “Enjutsu” practitioner. Now, he must fight against his own family members and also help them find out the true identity of this mysterious killer. 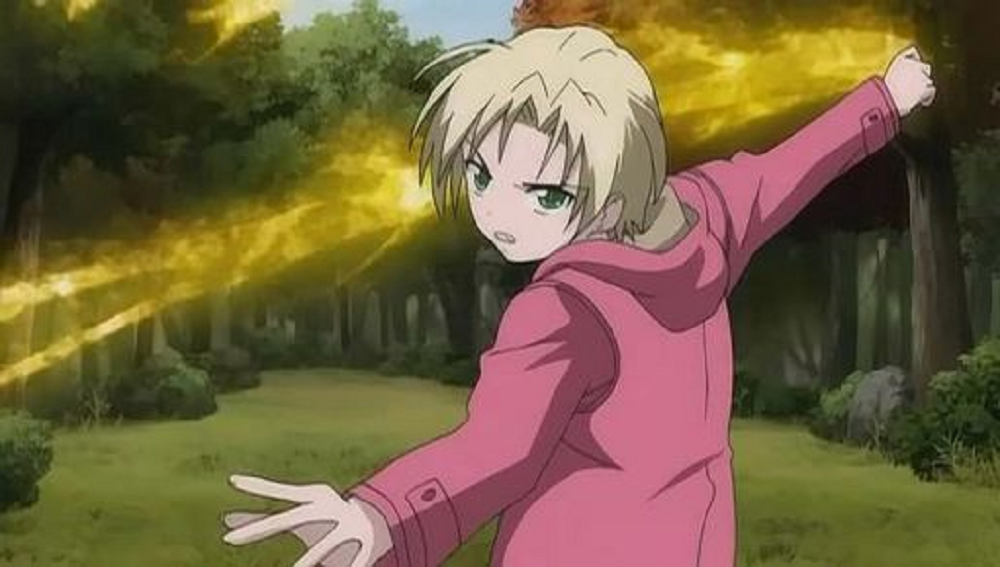 Ren Kannagi is the younger brother of Kazuma Yagami who, unlike Kazuma, possesses the ability to use Enjutsu. Ren has the appearance of typical bishounen, which has earned him the contempt of many of his peers. Regardless of what others say or think about Kazuma, Ren never really shows any hate towards his elder brother and looks up to him all the time. Despite his young age, he proves that when it comes to relationships, he is one of the most mature characters in the entire series. His special fire ability, known as the golden flame, allows him to purify demons and evil spirits with ease. He is also very popular at school and is best friends with an athletic guy named Tatsuya Serizawa. 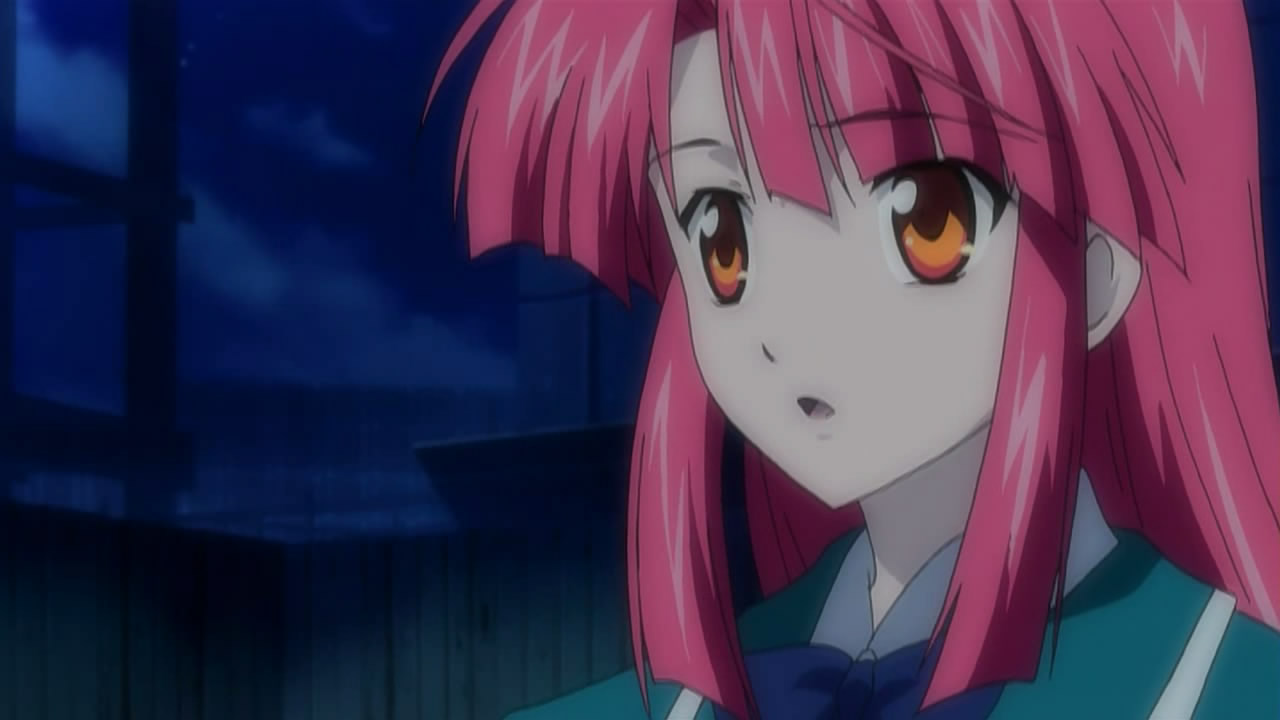 Ayano Kannagi is the female protagonist of the show. She is the second cousin of Ren and Kazuma. She is a very beautiful girl with long red hair and red eyes and is usually seen wearing her school uniform; but she does change her outfits occasionally. Ayano later gets to be the next head of the Kannagi family and she takes this role very seriously. The only problem with her is that she blindly uses brute force and charges without even thinking twice about it. She often does what she thinks is right and in such situations, she even goes out to defy her father if he comes in her way and stops her from doing something. 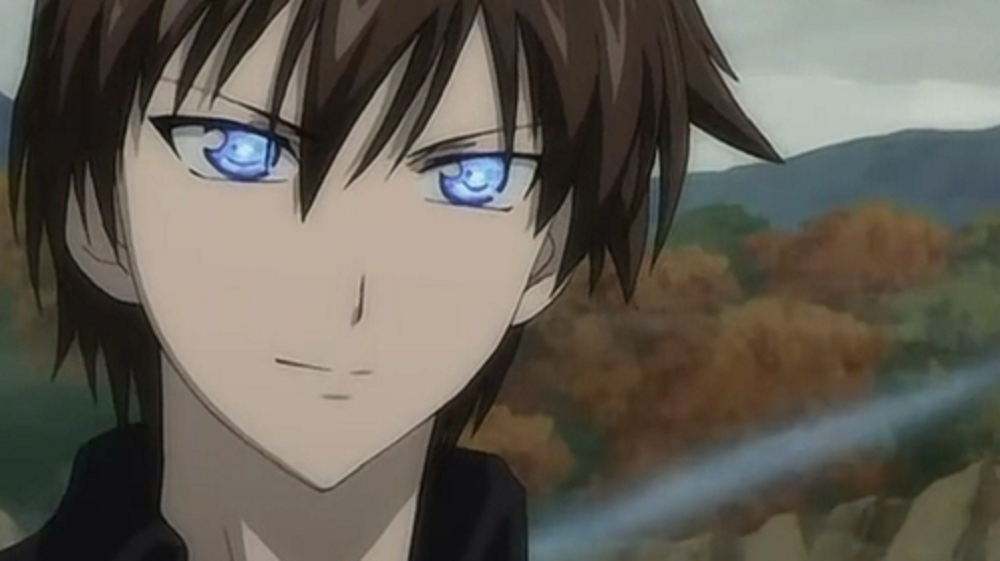 Kazuma Yagami, previously known as Kazuma Kannagi, is the main protagonist of the anime, who has come into a contract with the Wind Spirit Lord. He is more or less an anti-hero who is forced to challenge his own family members after being disowned by them. There was a time when he was the weakest of all but after he acquires his Futjutse powers, he becomes really egoistic about the fact that he is stronger than most now. Even after becoming so strong, he is still looked down upon by most of his family members because they consider him a disgrace for learning wind magic instead of fire magic.