Actor Kiefer Sutherland went through his coming-of-age phase with a number of coming-of-age flicks in the ’80s. Born in London, Sutherland’s parents, Donald Sutherland and Shirley Douglas, were actors. Sutherland borrowed his name from the American writer and filmmaker Warren Kiefer, who was the director of Donald Sutherland’s debut movie. The Sutherland family moved to the U.S. in 1968. Kiefer made his acting debut with the film ‘Max Dugan Returns,’ in which he played the character of Matthew Broderick alongside his father Donald Sutherland. After the divorce of his parents in 1971, Kiefer moved to Toronto with his mother. The young Sutherland lost to another passionate and aspiring actor Johnny Depp in the audition for the role of Glen Lantz in the movie ‘A Nightmare on Elm Street’ in 1984.

Kiefer got his first breakthrough with the 1984 Canadian movie ‘The Bay Boy.’ The movie went on to become a critical and commercial success and earned Sutherland and director Daniel Petrie, two Genie award nominations for best actor and best director, respectively. After the success of ‘The Bad Boy,’ Kiefer decided to move to Hollywood for better exposure and offers. His debut movie in Hollywood was the coming-of-age movie ‘Stand by Me.’ The actor played the character of a bully in the neighborhood.

Kiefer also played a minor role as one of the friends of Sean Penn’s character in the action thriller ‘At Close Range’ directed by James Foley. The vampire thriller ‘The Lost Boys’ also earned him popularity. Sutherland launched his home banner Still Water Productions in 1986. The actor got his second breakthrough with the 1990 movie ‘Flatliners.’ He played one of the lead characters in the psychodrama alongside Kevin Bacon, William Baldwin and Julia Roberts in the movie. In 1992, Sutherland tasted the success at the box office with the blockbuster, ‘A Few Good Men.’ He made his directorial debut in the next year with the television movie ‘Last Light,’ in which he also played the lead role of a prisoner.

Keifer rose to fame in the ’90s with back-to-back hits like ‘Article 99,’ ‘Twin Peaks: Fire Walk with Me,’ ‘The Vanishing,’ and ‘The Three Musketeers.’ He handpicked dark and complex characters and scripts with psychological themes during the early ’90s. In 1996, Sutherland emerged as a rising star with three high-profile movies, ‘Freeway,’ in which he played the lead role alongside Reese Witherspoon, ‘Eye for an Eye’ with Sally Field and ‘A Time to Kill’ alongside his father Donald Sutherland. ‘Freeway’ gained a cult status in the following years. The 1997 flicks ‘The Last Days of Frankie the Fly’ and ‘Dark City’ earned him widespread acclaim and popularity. Two years later, Sutherland released his second directorial venture ‘Woman Wanted’, a TV movie.

Sutherland joined hands with Woody Allen in 2000 for the movie ‘Picking Up the Pieces.’ But the black comedy was panned by critics and bombed at the box office. The setback prompted Sutherland to go back to his roots. For the next couple of years, the actor focused on low-budget projects and indie movies aimed at film festivals. His 2000 film ‘Beat,’ which premiered at the Sundance Film Festival, and the 2001 movie ‘Cowboy Up,’ which received the Crystal Heart Award at the 2001 Heartland Film Festival, garnered critical acclaim. He emerged as an art-house favorite with the movie ‘To End All Wars,’ which bagged two top prizes at the Heartland Film Festival and one top prize at the Hawaii International Film Festival.

Sutherland once again changed his course in the early 2000s by picking up satires and comedies. He joined the hit television series ’24’ on Fox in 2001. The action drama series stars Kiefer as a counter-terrorist agent Jack Bauer. Each episode of the series depicts 24 hours of Bauer’s life in real-time. The show went on to become one the greatest hits for Fox and ran for 192 episodes over eight seasons. Sutherland got four Emmy nominations for the Outstanding Lead Actor in a Drama Series and won the award in 2006. He was also nominated for a Golden Globe award in 2007 for his portrayal of Jack Bauer. During the long schedule of ’24,’ Sutherland starred in ‘Taking Lives’ opposite Angelina Jolie and Ethan Hawke, and ‘The Sentinel.’

The actor established a successful onscreen partnership with filmmaker Joel Schumacher. In 2011, Kiefer played the lead role in the critically acclaimed movie ‘Melancholia’ directed by Lars Von Trier. He reunited with his father Donald Sutherland in the 2015 western-drama film ‘Forsaken.’ His other major works include ‘Mirrors,’ ‘Monsters vs. Aliens,’ ‘the web series The Confession,’ ‘The Reluctant Fundamentalist,’ and ‘Pompeii.’ So now you might be wondering what is the next Kiefer Sutherland movie or TV show? Well, here’s the list of upcoming Kiefer Sutherland films and TV shows scheduled to release in 2019 and 2020. We can only hope that the latest Kiefer Sutherland movies would be as good as some of his recent ones. 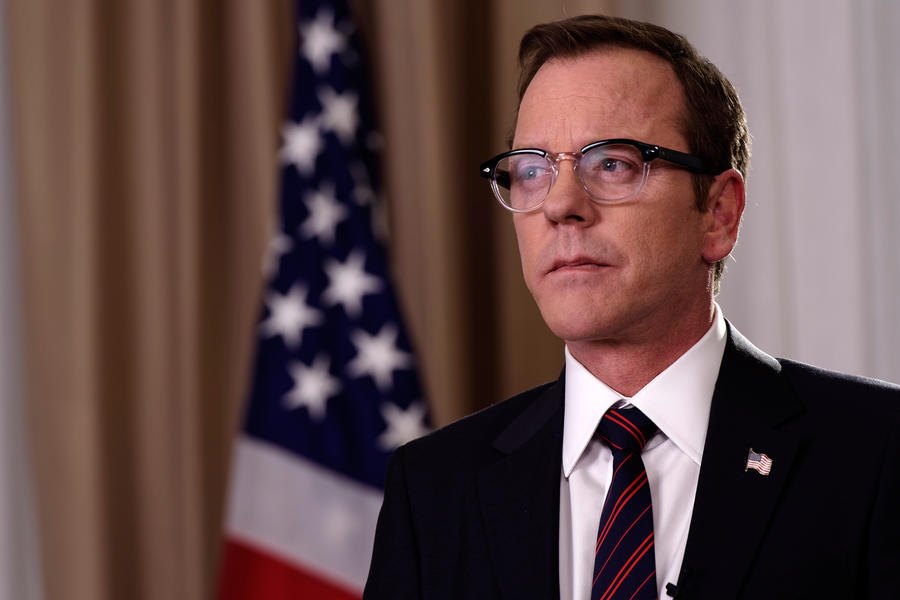 Kiefer Sutherland returns as the “accidental” President of the United States, Thomas Adam “Tom” Kirkman for a third season of Netflix’s popular drama series ‘Designated Survivor.’ Kirkman is the former Secretary of Housing and Urban Development, who becomes the President after a deadly attack slays every top official above him in the White House power ladder. Considering the security risk, Kirkman swords in as the President as early as possible. But soon, he realizes that the devastating attack was the beginning of the end.

ABC aired the first two seasons of the series. Netflix announced in September 2018 that the third season of the series would be aired as a “global Netflix Original.” Kiefer Sutherland reprises his role as President Tom Kirkman in the third season. Other regular cast members like Kal Penn, Adan Canto, Italia Ricci, and Maggie Q are also expected to return. Anthony Edwards joins the series as a new cast member, who plays the character Chief of Staff Mars Harper. Producers Jon Harmon Feldman and Guggenheim have cited the other thriller dramas like ‘West Wing,’ ‘Homeland’ and ‘House of Cards‘ as the inspirations behind this show. The first two seasons of the series earned critical acclaim for its portrayal of the usual government business through the eyes of a group of insiders. The plot of ‘Designated Survivor’ captures the tensed day-to-day mayhem at the nerve center of the political power of U.S. The third season is set to premiere on Netflix on June 7, 2019.