Kim Dickens started her acting career in theater. After graduating from the Lee Strasberg Theater and Film Institute, Dickens moved to Los Angeles to test the waters of Hollywood. She also worked as a waitress during her studies to make both the ends meet. In 1995, Dickens made her feature film debut with the comedy flick ‘Palookaville,’ alongside Vincent Gallo and Gareth Williams. Soon, she picked up regular roles in television pilots like ‘Voice from the Grave’ and ‘Two Mothers for Zachary.’

Dickens’ first breakthrough performance on screen was in the 1998 movie adaptation of Charles Dickens’s classic novel ‘Great Expectations.’ She played the character of Maggie in the film. Titles like ‘Zero Effect,’ ‘Mercury Rising’ and ‘The White River Kid,’ followed. In the first half of the 2000s, Dickens emerged as a prominent figure in films and television. She became the part of major projects like ‘Committed’ opposite Heather Graham, ‘Hollow Man’ with Elisabeth Shue and Kevin Bacon and ‘The Gift’ alongside Cate Blanchett. The actress got her next breakthrough in the 2001 independent movie ‘Things Behind the Sun.’ Dickens’ portrayal of the character Sherry McGrale, an aspiring singer haunted by a horrendous experience in the past, is truly stunning. ‘Things Behind the Sun’ garnered her critical acclaim. The role also brought Dickens a nomination for Independent Spirit Award for Best Female Lead.

In 2004, Dickens got the first breakout role in television in HBO’s cult Western drama series ‘Deadwood.’ The show went on to become a huge hit and amassed a cult following. Dickens played the character of Joanie Stubbs, a former hostess of The Bella Union and the owner of the hotel The Chez Amis. She played Stubbs till 2016. Her other major television projects include ‘Numb3rs,’ ‘Lost’ and ’12 Miles of Bad Road,’ among others. The actress has also played key roles in movies like ‘House of Sand and Fog,’ ‘Thank You for Smoking,’ ‘Wild Tigers I Have Known,’ and ‘Red.’

From 2010, Dickens started playing the recurring character of Janette Desautel in the drama series ‘Treme,’ which ran for 3 years and 36 episodes. She played a major role in the 2013 series ‘Sons of Anarchy.’ Her portrayal of Detective Rhonda Boney in ‘Gone Girl’ was widely appreciated. Dickens joined the political drama series ‘Houses of Cards’ on Netflix in 2015. The series became a huge success and completed a 6 season run on the streaming platform.

In the same year, Dickens landed the lead role in the horror drama series ‘Fear the Walking Dead‘ on AMC. Her iconic character of Madison Clarke earned the actress two nominations for Saturn Award for Best Actress on Television in 2016 and 2017. Her other feature films include ‘Miss Peregrine’s Home for Peculiar Children’ and ‘Lizzie.’ So now you must be wondering what is the next Kim Dickens movie or TV show? Well, here’s the list of upcoming Kim Dickens films and TV shows scheduled to release in 2019 and 2020. We can only hope that the latest Kim Dickens movies would be as good as some of her recent ones. 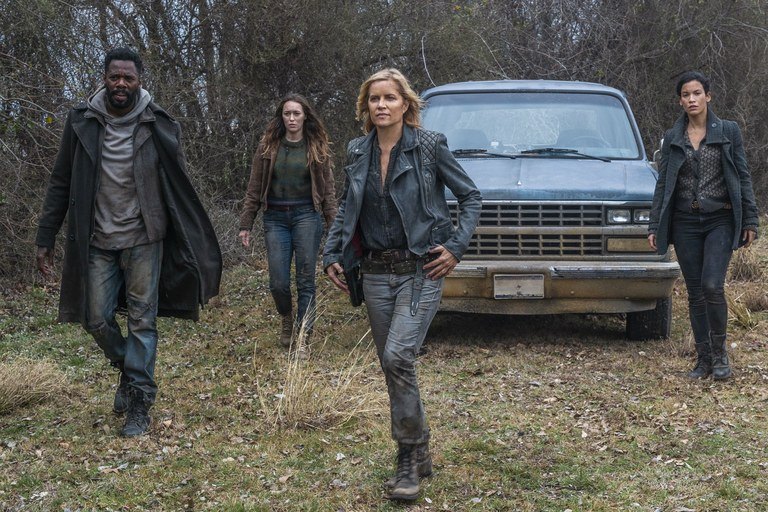 AMC’s horror drama series ‘Fear the Walking Dead‘ has been terrifying us for four seasons. The fifth season of the series, which is a spin-off and prequel to ‘The Walking Dead,’ is due in June 2019. The plot reportedly traces back to the origin of the zombie outbreak along the West coast. Over the four seasons and 53 episodes, the series went through a number of changes. Alycia Debnam-Carey and Colman Domingo reprise their respective characters in all four seasons while new cast members like Lennie James, Garret Dillahunt, Jenna Elfman, and Danay Garcia joined the walking dead bandwagon later.

The recently released season 5 trailer reveals the group of survivors led by Morgan Jones (played by Lennie James) searching for lone survivors in uncharted territory. Kim Dickens plays the iconic role of Madison Clark, the lead character in the show who works as a guidance counselor and mother of Nick and Alicia. At the end of the fourth season, Madison is seen seeking haven in a baseball stadium along with her family. But they have to confront a group of survivors known as the Vultures who occupy the stadium. Madison sacrifices herself to save her family from the Vultures and walking dead. But people raising from the dead is not an impossible thing in the walking dead universe.

Dickens herself revealed her willingness to return to the show with the upcoming season 5, reports Comicbook. Though the makers are tight-lipped about Madison’s return, her fans believe the character survived the final showdown in season 4 and is still alive somewhere. Season 5 of ‘Fear the Walking Dead’ is due on June 2, 2019.

Showtime’s upcoming drama pilot ‘Queen Fur’ stars Kim Dickens along with Lily Mae Harrington, Michael Mosley (‘Seven Seconds‘), Jon Foster (‘Like Father‘), Joshua Mikel (‘The Walking Dead‘), Keith Machekanyanga (‘Timeless‘), and Spencer Howell (‘Ithaca’). Created, written and executive produced by Eileen Myers (‘Masters of Sex’), ‘Queen Fur’ is set in a small town in Central Florida. The plot revolves around beauty queens, gun-wielding men and revolutionaries from Cuba, among others. Macy Dunleavy (played by Harrington), is a high school dropout who is searching for the meaning of her womanhood. Dickens plays the character of Macy’s mother, who was the winner of the local beauty competition in the town. Mosley plays the local gun salesman, Todd, while Foster portrays Rob, Macy’s older brother. Rob is an ex-Marine haunted by horrors from his past.

Machekanyanga dons the role of Ralph, a small-time criminal who operates in the guise of a successful entrepreneur. Howell is cast as Jim, the 9-year-old darling of Rita and Macy’s family. ‘Queen Fur’ is produced by Showtime along with Sony Pictures TV. Sian Heder, who is known for ‘Orange Is the New Black,’ directs the pilot episode. Deb Spera (Army Wives) also serves as executive producer alongside Myers, reports Deadline.