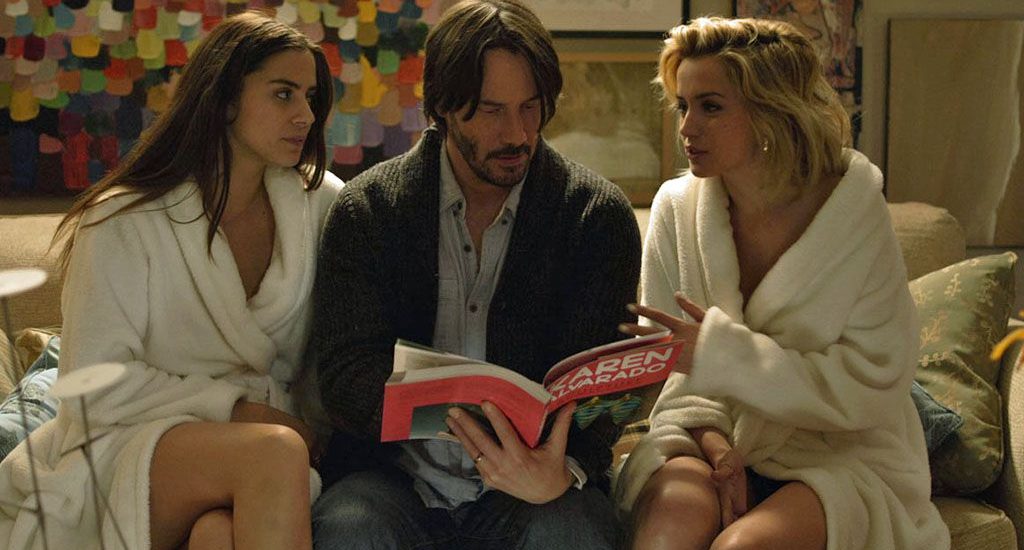 Eli Roth’s remake of the 1977 horror thriller ‘Death Game,’ ‘Knock Knock’ tells the story of Evan Webber (Keanu Reeves), a devoted father and husband whose life gets turned upside down when he opens his door on a rainy night and finds two beautiful young women standing there. He invites them in, gives them fresh towels to dry themselves, and even arranges a car for them. But as the night progresses, Evan discovers that the girls have an ulterior motive to be there.

Evan is a successful architect living in an expensive-looking, glass house with his wife Karen (Ignacia Allamand) and their two children. Karen is a high-profile artist whose artworks generate a significant portion of the couple’s collective income and sponsor their affluent lifestyle. Karen and the two children are going away for a short holiday at the beach without Evan as he is still undergoing physical therapy for a shoulder injury he sustained at some point before the film began.

He intends to use the time to finish a long-overdue project. Before leaving, Karen tasks her assistant Louis (Aaron Burns) to safely relocate one of her bigger sculptures to an art gallery. As the night falls, it starts raining heavily. It is then that the two young women, Genesis (Lorenza Izzo) and Bel (Ana de Armas), show up at Evan’s doorstep, completely drenched and apparently looking for a house where a party is being hosted.

After the incident, when Evan confronts the girls about vandalizing his wife’s sculpture, they tell him that they are both underage girls. He realizes that he can’t go to the police. When Vivian, one of Karen’s friends, comes to check up on him, she spots Genesis. Figuring out what might have happened, she promptly makes her departure. Evan finally convinces the girls to leave by calling the police and reporting a break-in.

That evening, the girls return, and the true torment begins. They tie him up and force him to have sex with Bel while Genesis films them. When Louis arrives and attempts to free Evan, the girls steal his inhaler, which eventually leads to his death. The girls destroy the furniture and draw obscene graffiti all over the house. Before leaving, they bury Evan up to his neck and upload the video of him and Bel together on his Facebook page.

They tell him that this was part of an elaborate game that they like to play, and neither of them is really a minor. The film ends with Evan’s family returning home and finding the house in complete disarray. Right before the scene cuts to black, his son remarks, “Daddy had a party.” ‘Knock Knock’ occupies a unique space in the home-invasion subgenre. It subverts all possible expectations by making the perpetrators women, and the victim male. But the film does not restrict itself exclusively to that notion either.

“You f***ed me,” Evan screams at the girls during his lengthy monologue. “You came to my house. You came to me. You came on to me.” The girls may argue that they are exacting revenge against unfaithful men by completely ruining them in front of their family and society. Still, with them triggering the incidents, the onus of guilt lies equally on their shoulders. Evan rejects their sexual proposals several times before they physically persuade him. The fact that they don’t hear the resounding “no” that Evan says multiple times, marks the girls as predators.

It’s even worse the second time. Bel, dressed up in Evan’s daughter’s school uniform, demands that Evan acts out a school-girl roleplay fantasy with her. When he refuses, the girls take his phone and force him to comply by warning him that they will FaceTime his wife and children. The scene is disturbing, deeply uncomfortable, and horrifying in so many ways. The monologue was triggered when the girls tied him up and told him that they are going to kill him at dawn.

Oscillating between fury and shame, Evan lashes out against them with the impotent anger of a broken man, trying but failing to assert his masculinity by comparing them to free pizzas. “It was free pizza,” he says. “Free f***ing pizza. It just showed up at my f***ing door. What am I supposed to do?” These are perhaps the most significant lines in the film. They not only demonstrate his frustration and abject fear but also point to a sense of entitlement that is finally surfacing due to the absolute hopelessness of his situation.

Bel and Genesis reveal that they are not really minors and never wanted to kill Evan. All this, they explain, is part of an elaborate game that they like to play. Evan is not their first victim, and now that he has failed the test, he will not be the last. As Genesis tells him, “You know what’s funny? They never say no. No matter who they are. No matter how much they love their families. You’re all the same.” When Ethan’s family comes back, it’s too late. People in their extended family and circle of friends are already finding out what he has done because of the Facebook post.

The way his son says in the final line of the film – “Daddy had a party” – is funny and sad at the same time. Before they went to the beach, the two children constantly muse about a party that they think Evan would have for Father’s Day in their absence. As it turns out, he did have a party, just not the kind that they were expecting. And it’s going to affect their lives. His indiscretion, which is now very much public, is going to split the family apart. The fact that consent was coerced from him both times it happened will likely be deemed immaterial.

When they leave, the girls take the family dog, Monkey, with them. Roth made an alternate ending for the film, in which Evan finds them at the house of their next victim by successfully tracking them through the GPS device on Monkey’s collar. When he knocks on the door, the girls ask the tied-up man if he was expecting company, before enquiring aloud, “Who’s there?”

With this ending, the film comes full circle, and the mantle of revenge is passed on to Evan. The film hints that the girls’ behavior stems from past trauma. If that is the case, if some horrific experience has indeed set them on a path of vengeance, then their own actions, in turn, have made Evan. Some time has probably passed since the girls were at Evan’s house. It’s pretty much given that Karen has found out what happened, and their marriage is ending.

On the verge of losing his family, Evan has located the girls and now wants payback. This ending allows the film to have a very classic horror or thriller final scene, in which the perpetrators generally reappear. Roth again subverts expectations by showing that it is the former victim that is now out on a hunt, and his former assailants are his intended prey.