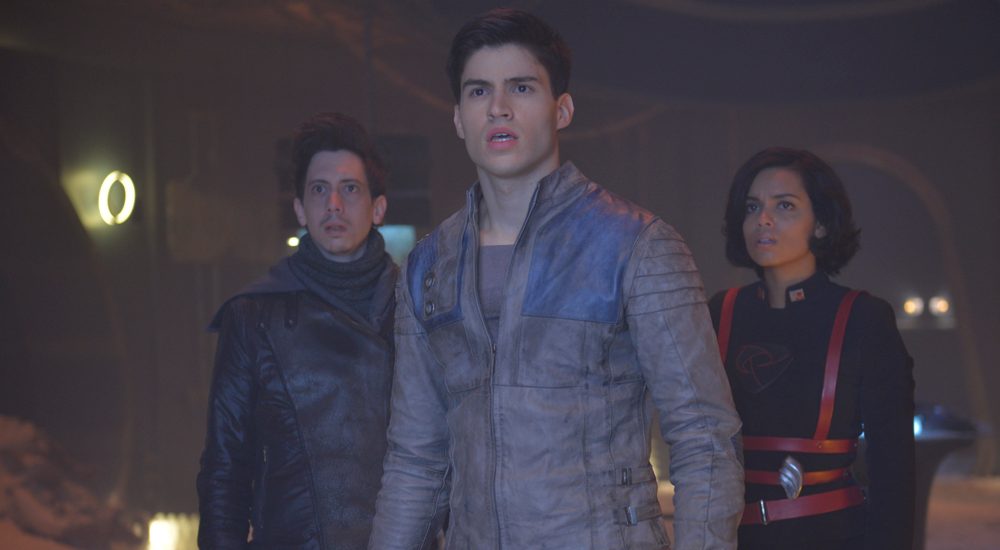 ‘Krypton’ is an American tv show that airs on SyFy and first premiered on March 21, 2018. The show is a tribute to the creative liberties Zack Snyder took to create the alluring world of Krypton in ‘Man of Steel’. It shares the same concepts highlighted in ‘Man of Steel’, which was a stand out among the other superhero movies. The genesis chamber for the procreation of a future generation of Kryptonians and a separate set of Kryptonian alphabets and vowels are some of the concepts David S. Goyer, show’s creator, incorporated into the series.

‘Krypton’ takes place in the city of Kandor where pseudo-scientific beliefs and the people’s devotion to their sun-god Rao creates a hierarchy similar to the dark ages on our planet, which saw the church silencing and killing the inception of a scientific revolution. The series takes place approximately 200 years before the birth of Kal-El / Superman and the eventual destruction of Krypton. Krypton follows Superman’s grandfather whose family, the House of El, has been ostracized and shamed. Seg-El fights to redeem his family’s honor and save his beloved world from the arrival of Brainiac, that is grandfather warned the council about, which in turn got him executed by the voice of Rao.

Krypton Cast: Who is in it?

The cast of ‘Krypton’ is led by Cameron Cuffe as Seg-El, Superman’s grandfather and Georgina Campbell as Lyta-Zod, a commander of their planet’s army. Shaun Sipos plays Adam Strange, a human from the future. Elliot Cowan stars as Daron-Vex, the former chief magistrate of Kandor. Ann Ogbomo stars as Jayna-Zod, the former Primus of the Kryptonian military guild. Aaron Pierre is cast as Dev-Em, a former commander in the Kryptonian army. Rasmus Hardiker stars as Kem, a former bar owner and Seg’s best friend. Wallis Day stars as Nyssa-Vex, the former junior magistrate and the daughter of Daron-Vex. Blake Ritson plays Brainiac, an alien android being from the planet Colu. Ian McElhinney stars as Val-El, Seg’s grandfather, who defied death by going to the Phantom Zone. Colin Salmon plays General Dru-Zod.

In the second season, Emmett J. Scanlan as Lobo, the cigar smoking, rough-edged interstellar mercenary, and bounty hunter and Aoibhinn McGinnity as Lis-Se, A Kryptonian scientist were added to the cast.

Krypton Plot: What is it about?

‘Krypton’ revolves around the family of Superman or Kal-El, but is set long before he was born. Seg-El, his grandfather, fights to restore his family’s honor and protect his home planet from being plunged into chaos. If you are familiar with Superman, one of DC’s and the comic world’s most iconic superheroes, then you will know that he hails from Krypton, and it is the eventual destruction of his home planet that drives him to earth where he embraces his destiny of a superhero. It is the knowledge of the inevitable destruction of Krypton, that makes the series all the more poignant, and also gives the show makers a chance to explore and show in-depth the richness of Superman’s home, before it met its fate.

What the show gets right is its decision to become a space opera rather than a superhero show. Thus it turns the lens of sci-fi to explore what are real-world problems. Krypton is no utopian planet as we were led to believe. People struggle on the streets trying to make ends meet, and there is overcrowding in the great city of Kandor, which does not seem too great suddenly. Instead of looking at the Superman lore, ‘Krypton’ turns the lens onto the society that birthed Superman, so we get to understand our hero a little better.

With the addition of characters who can hop time and planets like Adam Strange, the show is open to a cosmic side, and also puts Superman firmly within the narrative, without ever having to go to him. Frankly, when compared to the other DC prequel show, that is, ‘Gotham‘, which explores Batman’s beginnings, ‘Krypton’ fares much better due to the expert handling of the content, and the direction the show is taking.

Season 2 starts with Seg-El stranded far from home where his grandfather leads a rebellion against General Zod. As the season progresses, we see Adam Strange and Seg evading a bounty hunter and the former going head-to-head with Brainiac. General Zod uses Nyssa to further his cause, but soon realizes that the rebels are gaining advantage. As the battle for control intensifies, Seg reunites with Val and the Rebels in the fight against General Zod. The season ends with Seg and his allies facing off General Zod.

‘Krypton’ Season 2 premiered on June 12, 2019. As far as the next season goes, we have bad news for the fans. On August 16, 2019, Syfy announced the cancellation of the show. The season 2 finale drew just 350,000 same-day viewers, with season two averaging a total of only 408,000. That’s down considerably from the 1.8 million viewers from season one. Considering the declining viewership of the show, it was expected that Syfy may not continue for another season. Though, fans should not lose all their hopes. There’s still a possibility that some other network picks up the show at some point in future. If that happens, we will update you about ‘Krypton’ Season 3 release date.

While we wait for any positive news on ‘Krypton’ season 3, check out the season 2 trailer below. If you haven’t seen the show yet head over to Syfy Channel to catch all the previous episodes.