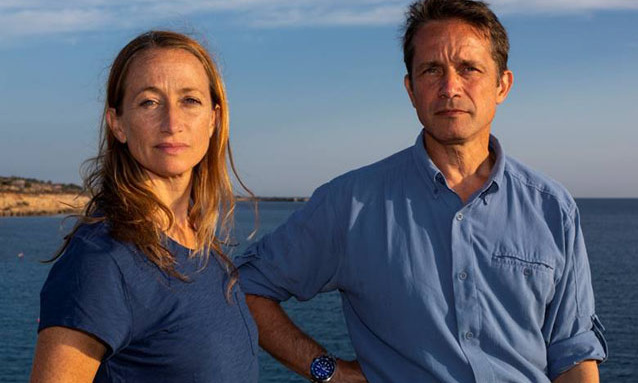 Considering the fact that 75% of our planet’s surface is covered by water, it is only natural that the oceans hold far more mysterious tales than what can even be perceivable on land. Since the birth of civilization, the presence of water everywhere has always created myths and mysteries around it. The largest stretch of water that humans in the ancient era found were the seemingly endless oceans. And it is the many mysteries of the ocean that are being dealt with in the Science Channel show, ‘Legends Of The Deep’.

Legends Of The Deep Cast: Who is in it?

‘Legends Of The Deep’ is hosted by the brother-sister duo of Céline and Fabien Cousteau. While Celine is an avid explorer and environmentalist, Fabien is an aquanaut and an ocean conversationist. The Cousteau family has a history of association with the ocean which started off from Celine and Fabien’s grandfather Jacques-Yves Cousteau, who himself was a naval officer, conservationist, and a documentary filmmaker. Their father Jean-Michel Cousteau was also involved in a similar line of work.

Fabien has made a documentary called ‘Mind of a Demon’, and has also collaborated with his father and sister on the PBS show ‘Ocean Adventures’. Fabien can also be seen on the National Geographic documentary series ‘National Geographic Explorer’. Celine has mostly been involved in environmental and educational ventures. Regarding the Cousteaus being a part of the series, Science Channel’s General Manager Marc Etkind said, “We are thrilled to have Céline and Fabien Cousteau, two of the world’s most accomplished underwater adventurers, onboard, reaffirming our commitment to bringing our viewers the best in ocean science and exploration”.

Legends Of The Deep Plot: What is it about?

Fabien and Celine go on pretty interesting adventures in ‘Legends Of The Deep’. They take us to the Shag Harbor in Nova Scotia where they explore a crash which happened there way back in 1967. The rescue mission that was carried out after the crash is among the Eastern seaboard’s biggest rescue missions ever. They also take up the challenge to dig deep into a wreckage site which has claimed the lives of five explorers till date. This wreckage is said to have happened around June 1980. The ship, Zenobia, had 150 passengers onboard. It is believed by locals that spies were involved in sabotaging the boat.

When mysteries of the ocean are talked about, one name which always comes to mind is definitely the Bermuda Triangle. The Cousteaus try and locate a graveyard of ships which is said to be located somewhere around the infamous zone. A sinkhole is an unusually deep cavity on land, and these cavities are sometimes found at the bottom of the oceans as well. One such sinkhole is the Blue Hole off Belize’s coast. Only a select few explorers have managed to go to the bottom of the Blue Hole in a submersible ship, but despite all the dangers, Fabien attempts this dangerous feat.

Sea-monsters are mysterious creatures that are believed to dwell at the bottom of the oceans. There are legends of many sea-monsters throughout the world across several cultures. Celine takes us on an adventure in trying to learn the truth about such a creature whose mention is found in the old texts of the Mayan civilization. This assortment of adventures surely makes ‘Legends Of The Deep’ a pretty exciting series.

Legends Of The Deep Season 2 Release Date: When will it premiere?

‘Legends Of The Deep’ season 1 premiered on June 9, 2019. It is one of the most exciting adventure/exploration shows of recent times, especially for those who are interested in knowing the hidden secrets lying at the bottom of the oceans. There is no news on the next season yet. Even though there are tons of mysteries of the oceans left to be explored, the fact that the show was conceived as a miniseries, gives us a pause regarding its chances of renewal. But then, stranger things have happened on television. So, if we come to know about ‘Legends Of The Deep’ season 2 release date, we shall update this section.

Legends Of The Deep Trailer:

Unfortunately, Science Channel didn’t release any trailer for ‘Legends of the Deep’, but you can always visit its official site.