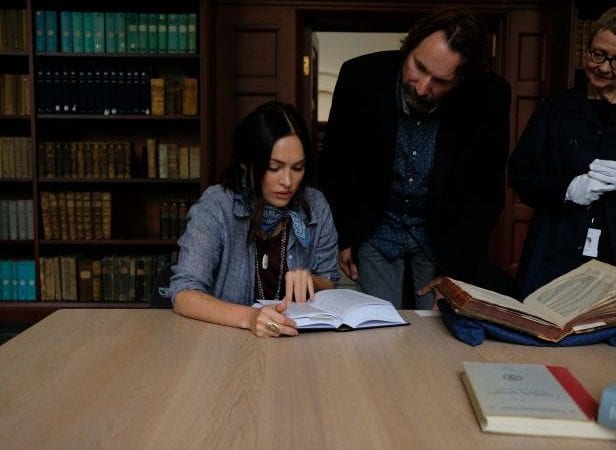 Legends of The Lost is an adventurous venture hosted by Megan Fox that first aired on the Travel Channel on December 4, 2018. The series was originally named as Mysteries and Myths with Megan Fox. This American docu-series co-created by Megan Fox embarks on a journey with Fox, archaeologists and experts to reexamine the history and challenge the conventional beliefs that we have held since centuries about certain civilizations and their ruins.

Legends of The Lost is produced on Travel Channel by the Kara Seven Pictures that is a Red Arrow Studios Company of Megan Fox. Sarah Wetherbee, Emre Sahin, Kelly McPherson, Jason Wolf and Pete Ritchie are the shows’ executive producers.

Legends Of The Lost With Megan Fox Cast: Who is in it?

Megan Fox, an American actress and model, hosts the Legends of The Lost. In the four hour-long episodes, the actress meets archaeologists and experts to unravel the age-old mysteries that still vex the thoughts and beliefs of scientists and common people. “All across the world, our ancient ancestors left behind towering mysteries and enchanting myths,” said Fox. “As an actress, I’ve been lucky enough to peek behind the curtain at some of these ancient sites, and it has ignited an insatiable curiosity in me to learn about these lost worlds that are deep in our distant past. ”The series discovers some of the world’s most mystifying rue happenings like the Stone age and the Vikings to name a few.

Legends Of The Lost With Megan Fox Plot: What is it about?

The four long episodes show Megan Fox venturing on four different excavations to reveal the truth that some believe, and some do not. Fox takes a journey to the Scandinavian lands and to England as well to investigate the theory that proposes that female warriors were present in the Vikings War. From the earliest invasions that happened in the 790 A.D. to the Norman Conquest of England in 1066, the Vikings annexed and permeated from Scandinavia to England and Russia and to the Newfoundland up to the shores of North Africa. Since time immemorial, Vikings were believed to be at the forefront of this invasion. But new age archaeological findings doubt the long-held beliefs in which some say that female forces led the Vikings and some say the men led it. Here, Megan Fox is on the quest to find the truth behind the actual leaders of the Viking force.

In another episode  “Stonehenge: The Healing Stones”, Fox travels to the United Kingdom to explore the unanswered mysteries of the Stonehenge. Fox reveals the reasons behind our ancestors building up this monument and also explores whether the stones of this figure has some magical powers embedded in them. She tries to reveal the main questions that have been lingering around this monument: Was Stonehenge an ancient calendar, the world’s first supercomputer or a Stone Age? Or may be none of the above.

In episode “America’s Lost Civilization”, we come to know that scientists have held the belief that human settlements came to the land of what is called America today at the end of the Ice Age that is around 13000 years ago. But new archaeological pieces of evidence have revealed that the Savannah River in the southeastern part of United States had a migration that settled on this part of the land some 48000 years ago. Many are also of the belief that the first settlement had some gigantic prehistoric version of the Homo sapiens race. Megan Fox in this episode discovers the real truth behind all these settlements.

In another episode, Fox travels to Turkey to find out the discerning truth behind the Trojan War and its occurrence in reality. She uses the Greek legend Homer’s Iliad as her treasure map to reveal the truth behind this war. Megan Fox examines through high tech data and the latest news on archaeological evidence about this war and whether it ever took place along the coast of modern-day Turkey. She also tries to find the truth whether these were Home Iliad’s creative work of fiction or it was a real event.

Legends Of The Lost With Megan Fox Season 2 Release Date: When will it premiere?

Legends Of The Lost Season 1 premiered on December 4, 2018 on the Travel Channel. The show over the course of four weeks aired four hour-long episodes that brought a fresh perspective to the undiscovered mysteries of human civilizations and ruins. As far as the next season goes, Travel Channel has not made any official announcements yet. Though considering the uniqueness of the show, there’s a possibility of it getting another season. Our best guess is that if the show does get renewed, Legends of The Lost With Megan Fox season 2 can release sometime in December 2019. We will update this section as soon as we hear more.

Legends Of The Lost With Megan Fox Trailer:

While we wait for an update on season 2, check out the season 1 trailer to refresh your memories. If you haven’t seen the show yet head over to Travel Channel to catch all the episodes of the previous season.