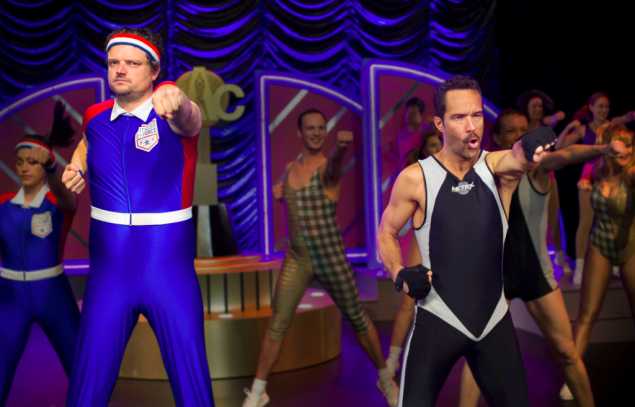 ‘Let’s Get Physical’ is a Pop TV original sitcom that has been created by Ben Newmark, Dan Newmark, and Connor Pritchard. Bringing in an amalgamation of 80’s pop culture and flashy, neon spandex, this aerobic-centered comedy is a fun-packed ride. After its launch in 2018, it is yet to be confirmed if the show has been renewed or canceled for another season. Well, here’s everything we know about this series so far.

Let’s Get Physical Cast: Who’s in it?

Let’s Get Physical Plot: What is it about?

Each of the eight episodes of ‘Let’s Get Physical’ has a runtime of around 22 minutes. The story revolves around slacker Joe Force, a 40-something man who aims to be a rocker. However, he is forced to make a comeback in the fitness industry after his dad, Colonel Tom Force, the “Godfather of Aerobics,” passes away unexpectedly. The father-son duo had their own differences related to personal fitness, which led to their eventual estrangement. Joe gets to know that his dad has left him a broken-down family gym along with some strange provisions attached to his will. Although Joe is more concerned for his $8 million inheritance, he is devastated when he learns that the cash is reserved for the winner of an upcoming aerobics competition. Now, in order to lay his claim on the money, he has to venture back into aerobics.

Janet Force, Joe’s mom, a former beauty queen, takes up the front row alongside Joe, to win back the Competitive Aerobics Champion title from Barry Cross, Joe’s rival and husband of Claudia, Joe’s teenage love. As the episodes unfold, we witness how our protagonist attempts to take on every challenge and emerge victorious over his arch-nemesis to access the fortune he is supposed to inherit.

‘Let’s Get Physical’ is inspired by the fitness craze that has recently taken over the country. It is a self-aware comedy that introduces us to characters who are “distinctive, full of heart and played by a dream ensemble cast with undeniable chemistry.” According to Pop, “We are thrilled to start production on this hilarious new series, which completely captures the zeitgeist of the ‘80s in all the right ways.”

Read More in TV Preview: My Next Guest Needs No Introduction | The Breaks

Let’s Get Physical Season 2 Release Date: When will it premiere?

‘Let’s Get Physical’ season 1 premiered on Pop TV on January 24, 2018. The first installment comprises eight episodes, namely, ‘Winner’s Blood’, ‘The Dancing Criminals’, ‘What’s in the Box’, ‘Lycra-virgin’, ‘Paybacks a Bitch’, ‘The Double-double Cross’, ‘Angel Barry’, and ‘CAC Fight’. It aired following a weekly schedule, every Wednesday at 8:30 PM. The show ended with its eighth and final episode on March 14, 2018.

At present, the question isn’t what is going to happen in the next season, but it is whether Pop would renew or cancel the show? Now, in order to give you a definite answer for that, let’s give you a gist of how the series performed upon its release. It averaged a mere 0.02 rating with only 80,000 viewers after its premiere. And this is indeed quite a low figure. Therefore, with such terrible ratings, it is almost easy to predict that the show has likely been cancelled.

Now, to confirm our predictions, we have also received an update from Pop Boss, Brad Schwartz. When asked about a potential renewal, this is what he had to say: “I think that ship has sailed.” He further added that the idea was extremely good and the story came with a really innovative pitch. As per him, it was like the movie ‘Dodgeball’ had received its TV version. With an amazing cast and phenomenal acting, the scope was great. But unfortunately, the reception was poor.

So, there you go. ‘Let’s Get Physical’ has been officially cancelled. We understand that’s a bit of a sad news for fans. But who knows? The world of entertainment is so full of twists! If by chance, ‘Let’s Get Physical’ decides to resurface and continue in some other form, we will immediately update this section with’Let’s Get Physical’ season 2 release date. You may want to keep the track on the upcoming updates by bookmarking us and checking your news feed at regular intervals.

Below is the official trailer for season 1 of the series. You can check it out to understand what the show is all about.