Will There be a Living Biblically Season 2? 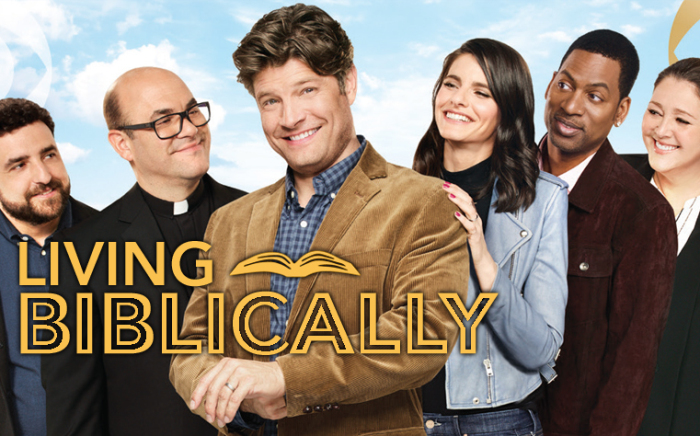 Living Biblically was supposed to be a surprisingly ambitious pitch for a show for standing out of any mainstream comedy tropes and subgenres. It does not have a direct funhouse base (usually an apartment where friends hang out – like in Friends) to play the comedy equivalent of a kitchen-sink drama and neither does it have the gusto of a mockumentary-themed series to become breakout hits. It even does not feature a seasoned Michael Schur to write it.

This takes it out of all ‘safe-zones’ of sitcoms, so it looks much more like something out of a Netflix venture than a scripted CBS show. It is based on a very quirky premise derived from the book, The Year of Living Biblically. The book is a bestseller, though, which explains why Warner Bros. TV got hooked enough to actually produce a season of its adaptation.

Sadly, none of the books magic translates well to the adaptation, and it makes for a rather mediocre sitcom in how the producers spin it. However, the question still remains: will there be a ‘Living Biblically’ season 2? We will delve into that question, but first let’s quickly look into the details of the series.

Living Biblically Cast: Who is in it?

The label of Warner Bros’ on any average-looking show would raise some expectations on the production budget (at the very least). Living Biblically lives up to that, but it circumnavigates having to hire a star-studded cast. That said, the cast sheet of Living Biblically is far from slush-pile material: if not a Jim Parsons (the iconic Big Bang Theory protagonist), it features a few CBS familiar faces, including Sara Gilbert from Big Bang Theory in a recurring role. The extent of mainstream stardom is not limited to a few cameos and meet and greets and extends to the main cast.

Ian Gomez (famous for his recurring role in Cougar Town, the legendary ABC-TBS show) plays the very liberal priest who tries to support the main character and is a series regular. The rest of the main cast are also mostly lesser-known actors who have acted on CBS shows before: Lindsey Kraft (plays Leslie Currey in the show) exemplifies their status, having shows like Veep, NCIS, and Modern Family on her CV – all of which are sadly still one-episode gigs. Likewise, David Krumhotlz (Rabbi Gil Ableman) and Camiryn Manheim (Ms Meadows) are also actors who have previously starred as series regulars on CBS shows almost exclusively.

The main character, Chip, is played by Jay R. Ferguson, by far the most well-known faces among the cast, having worked with many major networks: NBC’s Surface, AMC’s Mad Men, ABC’s Real O’Neals and the CBS sitcom Evening Shade.

Living Biblically Plot: What is it about?

Before we proceed with the whereabouts of the show, it is important to reiterate its source: a book by A.J. Jacobs, an editor for the magazine Esquire, and a regular columnist on Entertainment Weekly. ‘The Year of Living Biblically: One Man’s Humble Quest To Follow The Bible As Literally As Possible’ is big on its name, and lays out exactly what the book is all about: a semi-biographic premise leading to a thought experiment that often sounds like an elaborate prank. This is more than what can be said for the show. It fails to live up to the book in more than one ways, the biggest of which is betraying its spirit (no pun intended).

The book thrives on being extremely quirky in its premise, and instead of a big payoff at the end, it reads like a joyride with punchlines at the corner of every page – and the producers of the show took this too literally. The one thing the show does well is to briefly contextualize the otherwise absurd premise of the content. As it would be obvious to you, the book (and the show) is about a man trying to live out the biblical gospels as literally as possible. This includes the fact that there is an edict out to stone adulterers – which the book’s fictionalized A.J. Jacobs (a befitting name) literally attempts to actuate. In the show, the main character is suffering not a crisis of faith, neither an existential dread. He simply goes to the church and asks how to be a good man – and in turn, a good father.

Sadly, the laugh tracks and the general way the show handles a brilliant premise turns it into a mediocre sitcom at best. Its obsession over a per-minute joke quota hurts it in many ways. For example, the book has a colourful character gallery of religious gurus and disciples (except for the NY-based atheists), some of them real-life persons, while the best the show does is feature a very truncated version of its shadow with a priest, a rabbi, and a handful of religious figures, who at their prime act as a mouthpiece for the per-minute joke with the laugh track cue.

Living Biblically Season 2 Release Date: When will it premiere?

CBS is not the standard of excellence in sitcoms ever since Big Bang Theory stopped being as good as its initial seasons were – but Living Biblically is not on par with even this lowered standard. The show was met with an average 5 million viewers on premiere day, but it dipped to 3.5 million a few episodes in, after which CBS pulled the show from the air and replaced its slot with Big Bang Theory rerun. Although the remaining was aired much later in July 2018, it struggled to maintain a million viewers on its return run – putting the nail in its coffin. Living Biblically season 2 stands cancelled.