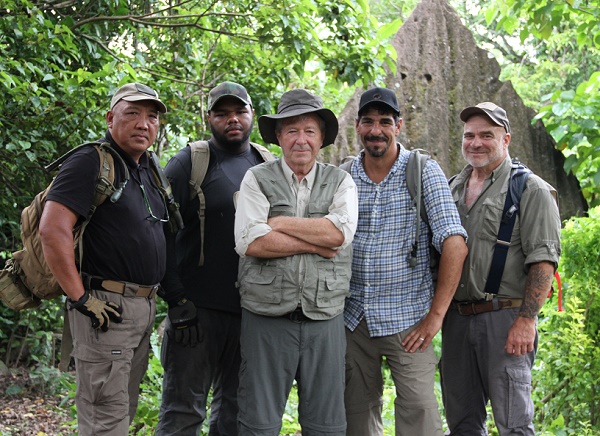 “Only the truth will lead you to treasure” – Josh Feldman. There is something magical about lost treasures. The history behind it, the legends, the stories, and the adventure. Travel Channel’s latest addition Lost Gold takes us deep into the past while unravelling mysteries that are more than 100 years old. The real treasure is the fun of the adventure and the reliving of history. The exotic locations have you mesmerized, and the intriguing tales associated with each treasure uncovered are enthralling. The show first aired on Travel Channel on January 14, 2019, with seven one-hour episodes.

Lost Gold Cast: Who is in it?

Along with the brothers John Feldman and Jesse Feldman who play themselves and host the show, the cast has several actors who act in dramatized parts of the show.  Some of the actors include Sam Bearpaw, Trevor Butcher, Geronimo Vela, and Ben Burton, among others.

Lost Gold Plot: What is it about?

Brothers Josh and Jesse Feldman are cowboys from Arizona with a family history steeped in old country lore and gold mines. They own a horse ranch, are wilderness guides, and even own a gold mine. But most importantly they are treasure hunters. They love adventure and are history fanatics. They search for old diaries, maps, records, and even befriend the locals to unravel deep secrets from the past. They put themselves in the shoes of the people from that era, and this gives viewers a chance to live the history with them.

Josh and Jesse want us to remember our history and culture while giving us serious wanderlust goals. The first episode ‘The Lost Cochise Strongboxes’ takes the brothers to southeast Arizona, deep into the rugged deserts there on their journey to uncover the mystery of an Apache Chief who reportedly buried two boxes full of gold somewhere in the mountains.  In the episode, Lost Adams Diggings — arguably the most popular mines of the Southwest, we see the brothers travel deep into the desert in search of gold. They discover a hidden canyon which is possibly what they had been looking for.

The show aims to provide a fresh perspective on history and give viewers a chance to hear some great old stories. Humankind is known to be fascinated with the past because, without the knowledge of history, we will never be able to build a great future for ourselves. The great reveal in the end and all the lessons we learn along the way makes this a rather compelling watch. If you are someone who enjoys travel and history shows, Lost Gold is perfect for you. The show has a wide audience appeal and can be enjoyed by everyone. Each episode is based on a true historical story, and a lot of research goes into planning every episode. Sometimes the places can be dangerous and very remote. Overall the show looks great and will have you hooked.

Jesse and Josh and believe that their desire for adventure and mysteries is ingrained in their blood, having grown up with their father seeking answers to lost treasures. “We didn’t have a choice! Well before we were born, our dad came to Arizona in search of the Lost Dutchman, a legendary lost gold mine believed to be in the Superstition Mountains, and we grew up in that treasure-seeking culture,” Jesse said. “Our dad might as well have been Indiana Jones to us, and we got to go along with him on his adventures. But it isn’t the treasure itself that really attracts us. It’s the chance to find history by bringing stories to life,” added Josh.

Ad for what makes their partnership a success, the brothers said, “You can’t leap off a cliff without knowing what’s there first. Before you go out on a search, you have to be well-informed and do your research,” as per Jesse. Josh, on the other hand seeks guidance in his older brother. He said, “Jesse is older and the bookworm. He keeps me in check. When it comes to treasure hunting, you absolutely have to be able to trust your partner, and we have that. Plus, we know that if anything goes wrong, Mom will keep us in line — she’s our safety net!”

Lost Gold Season 2 Release Date: When will it premiere?

Season 1 of the show premiered on January 14, 2019 on Travel Channel. As far as the next season goes, we don’t have an official announcement yet. Though considering the uniqueness of the show, we would be surprised if it doesn’t get renewed. Our best guess is that if the show does get renewed, Season 2 of Lost Gold can release sometime in January, 2020. We will update this section as soon as we hear more.

Be ready for some great adventures, history lessons, and much more with season 1 of Lost Gold that you can catch on Travel Channel. There is no trailer available but you can watch this clip to refresh your memories.