Love can happen anywhere, even when one of the partners is behind bars. ‘Love After Lockup‘ Season 3 on We TV looks at couples who try to give it a shot at happiness after their partners are released from jail. Of course, there is quite a bit of adjustment required as the partner readjusts to society. Often, the pressures of a relationship become too much to bear on top of that. Either way, it makes for great content. However, the question is, who are Tyrice and Chanda who happen to be giving love a chance? And do they have a future together? 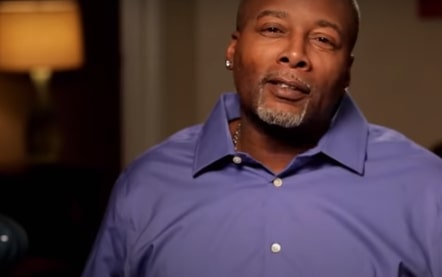 Tyrice is a 50-year-old man from Chicago, Illinois. He’s a father to three adult kids, and he’s tired of the games that women play on the outside. As a result, he turned to prison pen pals, looking for love. Tyrice hopes to find the partner for life and settle down as soon as possible. Moreover, he is a no-nonsense man who knows what he wants and believes that the relationship he shares with Chanda is legitimate.

Chanda is a 28-year-old from Kansas City. She’s been on the dating site while in prison. We don’t know the exact reason she’s behind bars, but the show does not have dangerous felons as cast members. Nonetheless, it remains to be seen if Chanda is using Tyrice to get ahead once she is out of prison.

Tyrice is convinced that Chanda shares a legitimate relationship with him, and he is willing to settle down with her. However, the two might not be on the same page. Already, there are quite a few serious hurdles in their relationship, and no matter how much Tyrice avoids answering the questions, they do not go away.

One of the major concerns is the age gap. Tyrice and Chanda’s age difference has led his children to believe that the woman is probably using their father for money and other resources. However, Tyrice is convinced his ex-con girlfriend won’t fleece him. Nonetheless, such lingering doubts can fester and ruin relationships.

Tyrice’s children aren’t the only ones against the relationship. People in his circle also react in a shocked manner when they hear Chanda is white. However, Tyrice has shut down all dissent in his circle, asserting that she is the one he wants to be with. As things stand now, Tyrice is a straight shooter who is confident that Chanda won’t use him.

However, from our past experiences of ‘Love After Lockup,’ we have seen that ex-cons often use civilians to rebuild their lives after prison. Moreover, the massive age gap does raise questions about whether Chanda wants Tyrice for his money. Either way, the former’s confidence and belief in the latter might come to bite him as the season wears on. For now, it is not for us to cast a shadow of doubt on their relationship. Tyrice seems to be happy with Chanda, and one hopes the latter is not leading him on.

If that is the case, this could be one of the relationships where we see some explosive fights. Tyrice comes across as a confrontational person and won’t take things lying down if Chanda uses him. We’re definitely in for a rocky road in their relationship.