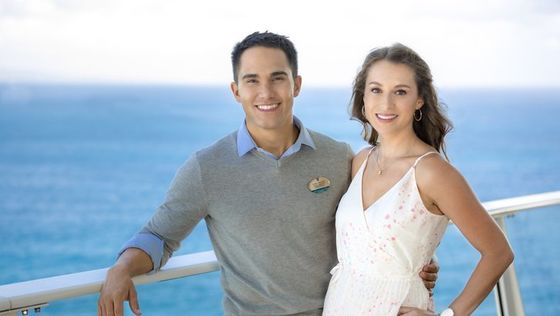 It is somewhat true that opposites attract. In reality, some of the best friendships and romances often begin with two people who find themselves at odds. That is perhaps because that is when people are at their truest. Truth and vulnerability, after all, is what make great connections. That is exactly what Hallmark’s ‘Love at Sea’ is about: love that blossoms from initial “rivalry.”

‘Love at Sea’ carries with it the distinct Hallmark charm. There is an attractive couple with chemistry at the center. There are some gorgeous locales. Last but not the least, there is a heartwarming story that propels the characters together. There is a reason Hallmark is often considered to be the king of romance on television.

‘Love at Sea’ revolves around the character Olivia who is an event planner. She is depicted to have had a messy romantic life prior to the events in the movie. However, she agrees to help a friend organize a major event on a luxury cruise ship. Her best friend, Alexandra is a renowned cooking and wellness personality. On the cruise, Olivia meets Tony, the Cruise Director who has his own ideas for the event. Their ideas are not always aligned but the two must work together in order to save the day and put up a good event. Will sparks fly between the two? Or will they be caught up in the contest?

As its title suggests, ‘Love At Sea’ is primarily set on the sea, on deck. The cruise ship is one of the most frequent setting locations of the television movie. Hence, it is natural for viewers to wonder where filming for the Hallmark production was carried out. Was it actually filmed aboard a cruise ship? Or did the makers use soundstages and computer imagery to do the trick?

Harmony of the Seas

Most of the filming of the movie was carried out on one of the world’s biggest cruise ship! The ship is named Harmony of the Seas and belongs to Royal Caribbean. The ship contains the tallest slide at sea (10 stories!), zip-lining facilities, state-of-the-art bars, and much more.

Just hours away before you get to find out where we’re dressed like this!? Who’s ready for #loveatsea on @hallmarkchannel !!?!? @vegaalexa #harmonyoftheseas @royalcaribbean

We are only 3 days away from the premiere of #LoveAtSea on @hallmarkchannel !! If you don’t want to watch it for @vegaalexa and Me, at least watch it to see @oceankingpenavega in his movie debut!!! lol this kid killed it!! I think they cut his monologue from the movie because no one could understand what he was saying.. but hey.. he’s still cute 🙂 9pm only on #hallmarkchannel

Love at Sea Cast: Who is in it?

Several viewers would have also wondered who the actors of the movie are. Moreover, how do they manage to bring in so much chemistry? Well, the reason for that is the fact that the leading pair are married in real life! Alexa PenaVega plays the role of Olivia while Carlos PenaVega essays the character of Tony. Alexa is also seen in the ‘Spy Kids’ film series, ‘The Loud House,’ ‘Pixies,’ and tons of other productions. Carlos, on the other hand, has starred in productions such as ‘Big Time Rush,’ ‘Spare Parts,’ and ‘Mighty Oak.’ Some of the other cast members of the production include William R. Moses, Audrey Landers, Melissa Carcache, and  Edward Finlay.