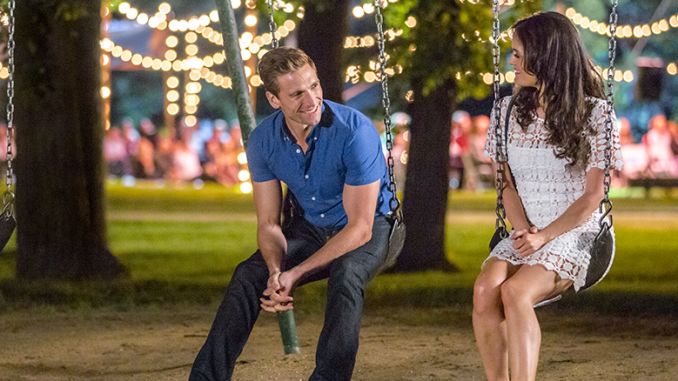 Profession coming in the way of romance is a rather conventional rom-com premise and a common happening. A lot of times, characters and real people are forced to choose between professional ambitions and romantic connections. However, on a lot of occasions, profession also brings love to the lives of people. That is well established in Hallmark’s ‘Love in Design.’

There is a reason that Hallmark is regarded as the leader of romance stories on television. It has presented tons of cheery, candy-coated tales of love on its network for a long time now. Some of its movies have been known to be capable of making people feel optimistic once again.

‘Love in Design’ revolves around the LA-based, Hannah McElroy. She is the host of a home improvement show and that is where the title of the movie comes from. She has a self-professed, modern style of design. Unfortunately, her show’s ratings have been falling behind. Hence, her network’s head wishes to try a new format for McElroy’s show. The new format involves a more extensive renovation over multiple episodes. She is sent to her hometown, Lewisburg in New England for the renovation of a historic building named Lewisburg Manor.

The owner of Lewisburg Manor, Margot wishes to transform it into a bed and breakfast. However, one of Hannah’s former lovers, Jeff is asked to ensure Hannah’s renovation preserves the historical aesthetic of the manor. Will the two be able to find a middle ground? Despite their opposing design styles, will sparks fly between them amidst work? There is only one way to find out!

‘Love in Design’ is a small-town movie. The television film is set in New England, in the town of Lewisburg. Being a Hallmark production, the small-town charm is captured rather well. Hence, it is natural for viewers to wonder where the production was actually filmed. Was it actually shot in New England? Or was some other place used to double up as the New England town?

Filming for ‘Love in Design’ was not actually carried out in New England. Instead, the Hallmark movie was shot in the province of Manitoba in Canada. Here, Winnipeg was used as the filming location. This is proven by the following Instagram post which shows the last day of shooting:

#loveindesign This was the last shot on the last day of filming as the sun was coming up at 5:15am. When the director yelled “Cut, that’s a wrap” everyone hugged and went their separate ways. Respect to @awalkk35 @alvinaaugust @danicamckellar Everyone was so serious and professional when the cameras were rolling and so much fun when the cameras stopped rolling.

That is not all. Actress Danica McKellar also uploaded a couple of posts with the location tag of Winnipeg.

Wassssup!?! A big HELLOOOO from me & my Hallmark movie #LoveInDesign costar Andrew Walker! 🖐🙌🖐 See my instastories for the full picture, which to be honest didn't fit here, ha! Also in my instastories, you'll see Andrew not really almost falling down the stairs…not. 🙃 . . . . @awalkk35 @hallmarkchannel #waving #whatsup #Day3

And…that's a WRAP! 🎬👊😎 What a great final night of shooting. 😊 I seriously had SUCH a blast on my latest @hallmarkchannel movie #LoveInDesign with my awesome co-star @awalkk35 and the rest of our incredible cast & crew. 😍 Thank you to the gorgeous & talented @alvinaaugust for being such a great TV friend & boss, and thank you to my REAL bosses 😊😊😊 @billabbotthc @michellevicaryhc @poperandy @ashleyashleyash @lalalalexi, and it was such a pleasure being in the trenches with our fearless leaders, @stanspry14 & @stevenrmonreo ❤ And now, after shooting all night (see more in my Instastories!), it's time for… sleep…! 😜😴 . . . Excited to share this movie with you all on September 15th!! 🎬 . . . . #moviemaking #thatsawrap #actorslife #showbiz #overnighter #swings #romcom #Hallmarkies ❤

Here are a few other photos from the movie’s filming:

The Mustang is a star. Feature car in the Hallmark move Love In Design starring @danicamckellar and @awalkk35 They had time for a quick selfie between takes. Crazy kids

Doing my best #singingintherain impression, in the rain, on set of #loveindesign at 3am on our final night.

A lot of Hallmark movies are filmed in Canada. This is because the country offers some truly gorgeous small-town locales. Apart from that, it also provides some lucrative tax credits that help bring down filming costs considerably. These also help diversify the country’s local economy.

Love in Design Cast: Who is in it?

The cast of ‘Love in Design’ is led by Danica McKeller. She plays the character of Hannah McElroy. Some of the other productions that she has been a part of include ‘The Wonder Years,’ ‘Young Justice,’ and ‘Crown For Christmas. ‘ Starring opposite her is Andrew Walker who essays the role of Jeff. Some of the projects that he has starred in include ‘Steel Toes,’ ‘The Torturer,’ and ‘10.5: Apocalypse.’ Some of the other cast members include Alvina August, Jan Skene, Eric Pollins, and Brenda Gorlick.