Do Lucifer and Chloe Get Together?

‘Lucifer‘ started with the promise of taking us into the fantastic supernatural world inhabited by celestial beings like angels, demons, and the Devil himself. Set in Los Angeles, the series soon turned into a crime procedural, saved by the sizzling chemistry between Lucifer and Chloe, a detective in the LAPD. They first meet when she heads to Lux, a happening nightclub owned by Lucifer Morningstar. Initially, Chloe finds the man arrogant but fascinating – someone with delusions of grandeur who believes he is the Devil.

However, Lucifer is drawn to the spirited and persevering detective as well and pulls some strings to become a civilian consultant – which in so many words means that he partners up with Chloe. Although they share a professional relationship, the feelings are undeniable. Lucifer seems to be vulnerable only around Chloe, but she begins to suspect there’s more to the man (umm, angel?) than meets the eye. Throughout their criminal and celestial adventures, the affections only grow, but there are constant hurdles that manage to keep Lucifer and Chloe apart. So, do the two finally get together?

Do Lucifer and Chloe End Up Together? 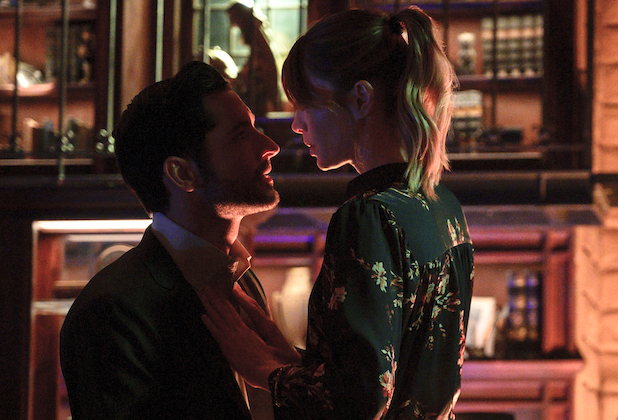 Deckerstar (Lucifer Morningstar + Chloe Decker) has been shipped hard by fans throughout. The two seemed ready to get together several times in the past. But, something or the other always stood in the way. Be it Cain, the first killer, who takes a fancy for Chloe, or Lucifer’s mother, who tells him the truth that Chloe is a blessing from God, created especially for Lucifer. Never one to follow dear old dad’s words, Lucifer distances himself from Chloe for some time, but the feelings are just too strong.

In the heat of the moment, right before he returns to hell, he tells the detective that she is the only one for him. His precise words are that it has always been Chloe. Unfortunately, by the time Lucifer returns from hell, his twin Michael has wreaked havoc on his life, including telling Chloe the truth about her purpose on earth. Being treated as a ‘gift’ doesn’t sit well with the independent detective who feels objectified.

However, they work past their issues when Chloe helps Lucifer realize that he is vulnerable around her because he chooses to be so. Similarly, his mojo about bringing out people’s desires don’t work on Chloe because she’s the only one who can see him for who he truly is. Not to state the obvious, but this is a match made in heaven. Nonetheless, they only share a kiss before casework comes in between. This continues for most of the latest season, until Chloe and Lucifer finally sleep together, fundamentally changing their relationship.

But do they last? Well, their first time is strange insofar as Chloe now possesses Lucifer’s power of knowing the desires within people. Lucifer’s initially miffed because he feels she stole it from him and even urges her to have sex again so he can get back the power. Meanwhile, Chloe feels it is something the two can share and wants Lucifer to be happy that they are finally together. The two do get on the same page and realize they’re most vulnerable around each other, which is a sign of their love.

Despite going through so much together, Lucifer can’t bring himself to say those three little, but incredibly essential words to Chloe – ‘I Love You.’ He is about to announce them though, when his brother, Amenadiel, freezes time – and all hell breaks loose.

Tom Ellis, who plays Lucifer, spoke about this, saying to The Wrap, “Well, it ties back to dad. Here’s the thing, Lucifer knows what love is, I think, or I think he knows what that feeling is, but he’s just so scared to express it because he’s never had that expressed to him. That’s how he feels. And so that is a stumbling block. But the timing of that scene in Episode 8, between Lucifer and Chloe, when he’s about to do it, he’s about to, the dam is about to break, and he’s about to say the magic words…So he has that capability, and I think he’s discovered that he has that capability. And when he looks into the detective’s eyes, he knows what he feels, but his way of expressing himself has been so damaged over the years that that’s the issue. So there’s something that he needs to deal with first before he can say that to the detective.”

Hopefully, Lucifer will say the magic words to seal the deal in the second part of Season 5, and for now, Deckerstar is together and ready to face new challenges.

Read More: Do Meredith and Derek Get Together in Grey’s Anatomy?