Will There be a Mad About You Season 2? 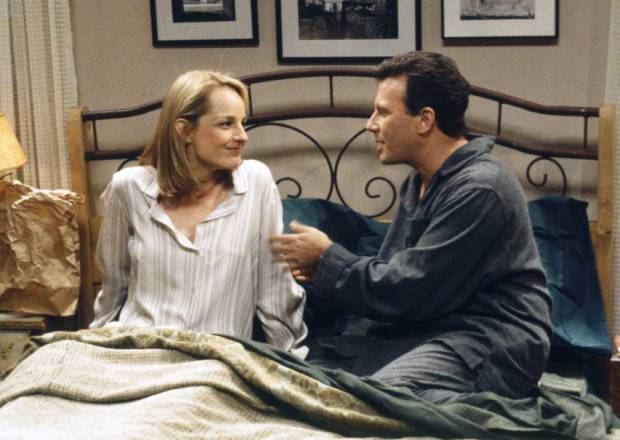 ‘Mad About You’, the original American sitcom that aired on NBC for seven seasons from 1992 to 1999, was one of the most popular series from the channel, which was the winner of four Golden Globes and 12 Emmys. Almost two decades after it aired its last episode, Sony Pictures Television made an announcement that it would be reviving the show. In March 2019, the revival was finally executed and ‘Mad About You’ was commissioned for an eighth season by Spectrum Originals.

The 12-episode mini-series witnesses many of the original actors from the parent series reprising their former roles. The story follows the lives of the Buchmans, 20 years after the seventh season ended. ‘Mad About You’: the revival chronicles the lives of Paul and Jamie as they navigate the nuances of contemporary marriage as empty-nesters after having dropped off their unpredictable, uncontrollable daughter Mabel at college.

Now that the first season is over and done with, what does the future hold for the show? Let’s find out.

Mad About You Season 2 Release Date: Renewed or Cancelled?

‘Mad About You’ season 1 premiered on Spectrum on November 20, 2019. The first part of six episodes from the limited series released altogether for an ad-free binge-ing session exclusively on Spectrum’s On Demand platform. The second part of the next six episodes released on December 18, 2019. Meanwhile, all 164 original episodes from the series are currently streaming free on demand for Spectrum subscribers.

‘Mad About You’: The Reboot, was originally planned as a limited series and the story does its job of filling in the gap before the original show’s finale. Hence, the likelihood of another season seems to be a remote possibility. However, many originally-planned one-offs have seen renewals in the past — so, it’s not a complete no-no either. And if the makers do make a second installment, they might have to consider another storyline — perhaps Mabel’s efforts to reunite her parents. But until Spectrum offers an official update, we cannot be sure. The only thing we can do it wait. Till then, we can safely assume that ‘Mad About You’ season 2 likely stands cancelled.

Mad About You Cast: Who is in it?

‘Mad About You’ sees Paul Reiser and Helen Hunt returning to play the roles of the protagonists from the original series. Reiser stars as Paul Buchman, a filmmaker, who graduates from New York University Film School and after struggling for quite a while, he settles for a stable job in NYC. Buchman stays with his family in the vicinity of Union Square, on lower Fifth Avenue.

Hunt plays Jamie “James” Buchman, Gus and Theresa Stemple’s younger daughter. Jamie enrolls in the prestigious Yale University, where she gets involved with seven boyfriends until she meets Paul. This is a chance encounter when she ends up stealing his copy of The New York Times. Eventually, they fall for each other and get married. Jamie does not get along (at all) with Paul’s mother and this relationship dynamic serves as one of the most frequent sources of jokes across the episodes.

Joining Reiser and Hunt are other original series regulars such as Anne Ramsay as Lisa Stemple, Jamie’s elder sister; Richard Kind as Dr. Mark Devanow; and Jerry Adler as Mr. Wicker. New additions to the cast include Abby Quinn from ‘Black Mirror‘ fame as Mabel, the rebellious Buchman daughter.

Hunt shared her thoughts about joining the show, saying, “I thought, if I do the first one, something will be lost because there will be one less set of eyes and I’ll be doing a bunch of jobs, but something will be gained, too, because I’m a detail freak”. She added, “And the details of the first episode matter: the first shot we have is the things [Mabel’s] taking to college, and I stole some things from my daughter’s room and made sure they aged the guitar. I care about all of that in a way that maybe somebody else wouldn’t care as much.”

Mad About You Plot: What is it about?

‘Mad About You’: the 1990s show follows documentary filmmaker Paul Buchman and his wife Jamie, who works as a public relations employee — as they navigate the struggles of a newly wedded life. Their issues range from trivial to huge matters, and often form the main theme that constitutes the humorous elements of the series. Toward the end of the seventh season, the couple has a baby girl named Mabel.

In the revived series. we meet the Buchmans, 20 years after the original series left off. Paul and Jamie have dropped off their unbearable grown-up daughter at college and are back home as empty nesters. Now, they need to dive into “the fertile ground of modern marriage.”

The season begins with us meeting Mabel as she prepares to leave for college. If you have watched the original seven-year run of ‘Mad About You’, you would know that it concludes with a 22-years fast forward into the future with Mabel as a complete adult. The revival goes back two years before the events of the finale and starts with Mabel venturing into adulthood.

Across the episodes, we witness how the Buchmans introduce new changes to adjust to their different life. For example, the couple decides to get a dog but they do not wish to name it. Why? Because it has a lot of character! Then the pair deals with other issues such as menopause, male bonding, and even remarriage, misogyny, and homophobia. Jamie is in a mess after her daughter’s departure and plans to become a therapist.

Both the characters are on their different journeys and meeting them again, feels like meeting a familiar couple after many years. The story fills in the original finale’s time-jump, where Paul and Jamie finally separate with Mabel planning to bring them together.

Mad About You Trailer:

You can check out the official trailer for ‘Mad About You’ season 1 below: