Mak From The Great British Baking Show: Everything We Know 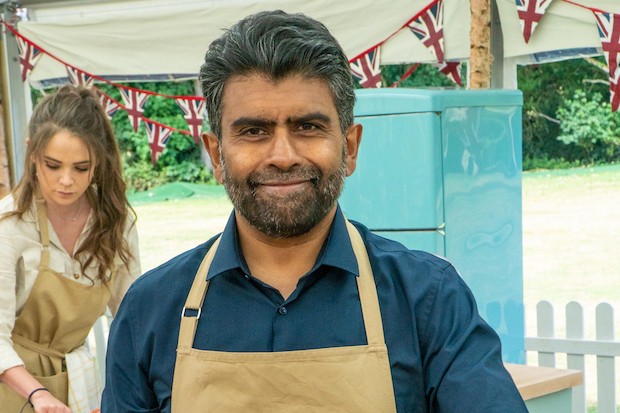 ‘The Great British Baking Show’ has a very straightforward premise— 12 contestants compete against each other in an attempt to prove their mettle in the baking world. The show is quite brilliant and tickles your sweet tooth as well. After all, intricate sugary treats are whipped up in the iconic white tent, and we also get to see the amateur bakers showcase their skills. Mak is one contestant on the show’s collection 8, and if you’re interested in learning more about him, then we have got you covered.

The 51-year-old accountant hails from the Greater Manchester area, and his full name is Makbul Patel. What started as an attempt to help his mother out in the kitchen has turned into a passionate activity for him. He has a wife and three children and enjoys baking many things including the traditional Asian Nankhatai biscuits on Eid. His Instagram profile also paints him as a very family-oriented man. In the episode, we are introduced to Mak’s hobby of beekeeping, which he does with his eldest son, Zafar.

When it comes to the kitchen, the accountant feels that he is ready to try anything, but the mess he leaves behind is his biggest weakness. He also said this about his experience on the show— “My fondest memory would be firstly getting together as a group and how we all clicked. At last getting to meet all the people on the Bake Off team and the amazing support and friendship they gave me.”

The series kicked off with cake week, and the contestants had to make Battenberg, a dessert that consists of cake enveloped in marzipan. Although the latter is usually made with almond flour, Mak took a more unconventional route. He decided to make it from pistachios instead since he is not a fan of the aforementioned typical ingredient. Orange and spiced stem ginger sponge cakes were used for the filling. He was also quite precise with the construction of the Battenberg. While the judges appreciated its neatness and appearance, they were not too fond of the flavor profiles that he chose.

Next up was the technical challenge, in which contestants had to create six pineapple upside-down cakes with precision. After all, a lot can go wrong with the individual components (such as caramel), the timing, and the temperature. For his rendition of the dessert, Mak placed 8th in the challenge.

The participants had to create a 3D bust of their personal celebrity hero for the last challenge in the episode. Mak went with an author he had admired for a long time, Bill Bryson. The cake used a combination of lemon Madeira sponges, redcurrant jam, and vanilla buttercream for the bust. But Mak had a special tool (think: mini spaghetti maker) do the trick for the hair. Interestingly, it is also used for making Bombay mix. Both Paul and Prue loved the details on Mak’s cake. Unfortunately, however, it was dry. Having said that, given his attention to details, we expect that the accountant will definitely come into his own in the subsequent episodes.