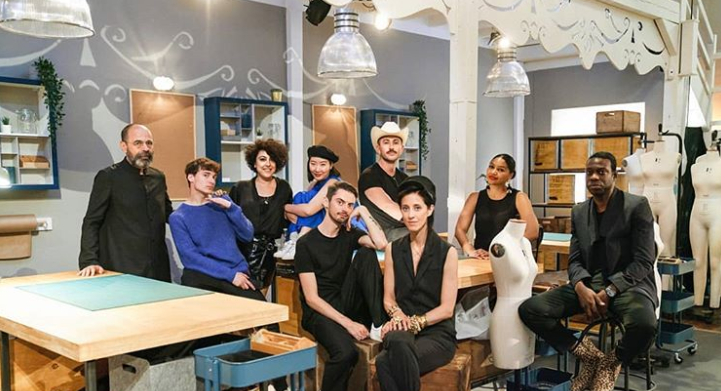 Amazon’s original reality competition series ‘Making The Cut’ has taken fashion designing to a whole new level! The show not only has exceptionally creative, talented, and skilled contestants, but it also flaunts an elite panel of judges. Naomi Campbell, Nicole Richie, Carine Roitfeld, Joseph Altuzarra, and Chiara Ferragni, are seen to be rating designs and offering valuable insights.

Who’s watching @makingthecuttv with us this Friday ? 🤍 I never thought I’d do reality TV again but when my good friend @heidiklum asked, I could not resist.. now you all know I’m brutally honest 🙊 @amazonprimevideo @amazonfashion #MakingTheCut #3days

The race to make their brand the next big thing in global fashion has pushed these artists and visionaries to step it up a notch. Hosted by Heidi Klum and Tim Gunn, the designers’ modern and futuristic looks are accompanied by a unique spin on traditional silhouettes. Having released six episodes so far, the show’s contestants can be seen strengthening their game and giving a tough competition to other participants.

Amazon just dropped two new episodes of the series. In episode 5, the entourage can be seen taking off for Tokyo! Tokyo is deemed as an important fashion city, especially known for its billion-dollar street-wear industry. Fighting the exhaustion of jet lag and the pressure of new surroundings, the designers are given another challenge. They have to create a two-piece mini collection based on street-wear, out of which one needs to be a commercial look. The designers are given two days to wander around the streets, find a muse and some inspiration, and showcase their looks at a fashion show in the Plaza. The task is won by Rinat and she earns a collaboration with Puma. Jonny gets second place. And, Sabato is eliminated for not sticking to Tim’s advice and presenting something that didn’t fit the genre.

In episode 6, the competition gets tougher as the designers are steadily approaching the finale. They are given only one day to embody the spirit of opposing forces. Just like the city of Tokyo embodies tradition as well as modernization; similarly, the contestants are asked to design two looks based on dichotomy. The pressure mounts and takes a toll on every designer. They are seen struggling, bickering, and flustered due to time constraints. Rinat runs into creative problems while Sander breezes through the task. Esther takes a risk by incorporating color into her new designs, and Jonny plays with darkness & light. The digital fashion show takes place in Amazon’s fashion studio, wherein designers are allowed to choose a theme and background for their runway looks. In the end, surprisingly, Rinat is eliminated for presenting an incoherent and confused look that didn’t match the taste of the judges. Sander wins the task for his easy-going yet creative looks.

Making the Cut Episode 7 Release Date: When Does it Premiere?

Amazon Prime Video releases two new episodes every Friday. So, Making the Cut Episode 7 expected to release on the streaming service on April 17, 2020, at 12 am ET. The show is scheduled to run for ten episodes. The finale will take place on April 24.

Where to Watch Making the Cut Episode 7 Online?

‘Making The Cut’ is exclusively available on Amazon Prime Video. It can be streamed on the desktop website, mobile application, or through Amazon Fire TV stick. Subscribe and watch the episodes directly on the streaming service every Friday.

The designers can be seen continuing their fashion journey in the heart of Tokyo. Their next challenge is to produce a customized look for an influential digital marketing company. This task is sure to push the contestants out of their comfort zone as they are required to combine artistry with consumerism. Most of the designers are shown to be having a hard time infusing their creativity into commercial looks. With only five players left in the competition, this assignment can either send them home or bring them a step closer to $1 million!

Read More: When Will ‘Next in Fashion’ Come Back on Netflix?