When Will Man Vs Bear Return on Discovery? 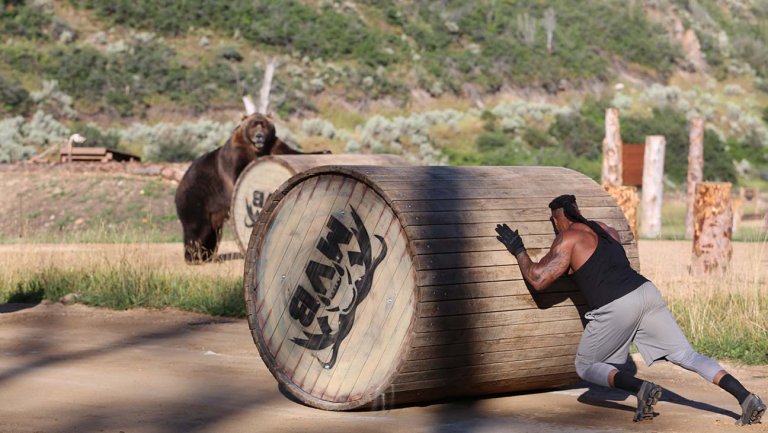 Grizzlies are a remarkable species, topping the evolutionary ladder when it involves its primary element, the food chain. But have you wondered what would happen when you come face to face with this fearsome predator? Well, this is exactly what happens in Discovery’s ‘Man Vs Bear’, a one-of-a-kind competition where humans are pitted against massive grizzlies.

With daring men entering uncharted territory, this contest does get unnervingly scary! As per Discovery, “humans will be entering the bear’s territory and take them on in a competition like never attempted.”

Owing to its somewhat ridiculous concept (well, bears are bears and humans cannot beat them with bare hands), season 1 opened to mixed reviews from viewers. But still, after its conclusion, there are fans who would want to know if we will see ‘Man vs Bear’ season 2. Well, let’s dive right into that.

Who’s the Host of Man Vs Bear?

‘Man Vs Bear’ features two on-the-ground experts giving blow-by-blow commentary as the action unfolds before them. Emmy winner Brandon Tierney is a sports commentator, who also serves as the host for the nationally syndicated show ‘Tiki and Tierney’ that airs on CBS Sports Radio. Previously, he has acted as the coverage narrator for the New York Knicks and acted as a commentator for college basketball for the last two decades.

Joining him is wildlife expert Casey Anderson, who holds a passion for animals and has been in this profession for 25 years. He has had a close association with bears and is also a wildlife filmmaker, holding massive know-how about animal biology and behavior. Casey founded the Montana Grizzly Encounter and has, to date, rescued multiple bears from captivity.

In the unlikely possibility of a season 2 happening, we expect the hosts to resume their original duties.

What is Man Vs Bear about?

Each week of this rigorous competition features three grizzlies, namely, Bart, Honey Bump, and Tank, who engage in five rounds of face-offs with their human competitors. The whole contest takes place in the Utah sanctuary, which is home to these animals. The tests are curated according to the bears’ natural instincts, predatory skills, and actions — so as to test their immense strength, speed, and stamina.

Among the games, there’s a tug of war and also a challenge to push and roll huge tree trunks. For instance, in one episode, one humongous grizzly throws his human competitor into the water using his super-strong jaws and paws. In a round called Brute Force, a bear starts rolling down a massive log down a slope. And again, in a challenge termed Human Prey, one of the predators hurls humans into a crater dug deep into the ground!

Among the trio, Bart is the strongest, biggest grizzly, who is above all of his companions in the sanctuary. Honey Bump, the only female of the pack on Bear Mountain, is the fastest one. Extremely ferocious, her instincts beat even those of her male counterparts. The duo was brought to Utah when they were discovered as orphaned cubs by an Alaska State Trooper. They were adopted by Doug and Lynne Seus, who are currently their caretakers. Rounding up the trio is Tank, the one with the most appetite, who is also under the care of the Seus couple.

After the five rounds on each episode, the final two contestants need to face Bart, standing at a staggering height of 8 feet 6 inches and weighing 1,400 pounds. The man or woman getting the maximum points is named as the champion for the day. Finally, toward the end of all the episodes, the three top competitors engage in the ultimate showdown with the bears.

The basic concept of this show is to groom the bears and test them for their survival instincts. It also attempts to answer if men have a chance against one of the fastest, smartest predators on earth. Are humans predators or simply the prey? Ira, an MMA fighter and a competitor from Dallas, Texas, described his experience on the Discovery Press Release, saying, “Competing against bears is both scary and exciting. It’s competing against the unknown. This is a completely new challenge for me.”

Man Vs Bear Season 2 Release Date: When will it premiere?

‘Man Vs Bear’ season 1 premiered on Wednesday, December 4, 2019, at 9 PM ET/PT on Discovery. New episodes were also available to stream each week on the Discovery GO app. The show concluded with its fifth episode on January 1, 2020.

The series was originally conceptualized as a one-off. And definitely, the concept is far-reached — how can humans surpass mighty bears when it comes to only physical strength? Even PETA raised its concerns about the premise, voicing their opinions against the use of animals for entertainment.

Hence, we don’t think that the reality show will be renewed for another season. Under the rare scenario that the makers decide to go ahead with a new installment, we can expect ‘Man Vs Bear’ season 2 to premiere sometime in December 2020.

You can watch an official sneak peek from ‘Man Vs Bear’ season 1 below. You can also head to Discovery if you wish to catch up on all the previous episodes from the series.