Most historical anime don’t have enough content to make up for the standard runtime of anime shows. This forces them to involve unnecessary fan-service in the show which affects the overall experience for a viewer. But ‘Maoyuu Maou Yuusha’ manages to do a decent job with involving fan-service in the show without compromising on its quality. While the plot of this anime is a little cliched and from the beginning itself one can predict the future of most relationships that are being portrayed, the story-line does have a very good structure and not even once does it face any issues with pacing. Even the use of comedy is rather situational and revolves around the romantic awkwardness between the characters. This approach may not be all that unique but it works really well and also creates some genuinely hilarious moments.

Some of the strongest aspects of ‘Maoyuu Maou Yuusha’ include its background themes and OSTs. All of them are extremely vibrant and evoke an indelible atmosphere that just makes the whole viewing experience much better. Overall, it tries to be moderately diverse by bringing out various themes like historical references merged with fantasy and also a whole lot of romance in the later part of the show. It also tries to touch upon several aspects of war and the strategies involved in it but abruptly leaves all of it in the middle of nowhere. Perhaps a second chance could actually make this show even better and give it an opportunity to balance out the themes that are necessary and also, to neglect the ones that add no apparent value to it. Despite its flaws, ‘Maoyuu Maou Yuusha’ does a great job with its dynamic universe building and it could be a great show if it somehow gets a season 2. Speaking of which, we might have some news regarding a new season in the next section.

Maoyuu Maou Yuusha Season 2 Release Date: When will it premiere?

‘Maoyuu Maou Yuusha’ Season 1 released on January 5, 2013 and came to an end on March 30, 2013. Since then, we haven’t heard much about the show except for a few fans requesting for a new season on random forums from time to time. ‘Maoyuu Maou Yuusha’ is not the most popular anime ever but it was somewhat successful. Sadly, that may not have been enough because even after all these years, we haven’t’ heard anything about it. Regarding the source material, there are still a few volumes that have not been covered yet, so that right there can be a green flag for a new season. But apart from that, nothing else seems to be in favor of a second season. At this point ‘Maoyuu Maou Yuusha’ Season 2 release date of 2021 or 2022 seems like a distant dream. We will update this section as soon as we learn more.

You can stream ‘Maoyuu Maou Yuusha’ Season 1 on Hulu and Crunchyroll with its original Japanese audio and English subtitles.

A gruesome war has been going on between humans and demons for the past fifteen years but no progress has been made so far from either of the sides. The Hero feels dissatisfied with how things have turned out to be and is determined to bring this war to an end. This is when he leaves all of his friends behind and decides to head into the Demon realm to meet the Demon Queen. Upon arriving at her royal castle, he is amazed at how incredibly beautiful she is and the fact that she needs his help now is even more surprising to him. The Hero is suddenly very confused about what is going but after giving it some thought, he refuses to help the enemy claiming that they have completely destroyed their Southern Nation.

But the Queen does not give up here and contradicts him by saying that the war has actually brought the people of the nations together and has also generated wealth and prosperity in many different ways. She even backs up her statements with solid evidence. She also adds that if the war was to be abruptly ended, the Central Nations would stop supplying food to the Southern ones and this would leave the people there dying from starvation. She calmly puts forth her final offer where she may be able to put a calm and peaceful end to the war if only the Hero agrees to her conditions. Somehow, the Hero is finally convinced and now, he sets out on a journey with someone who was once his biggest enemy. 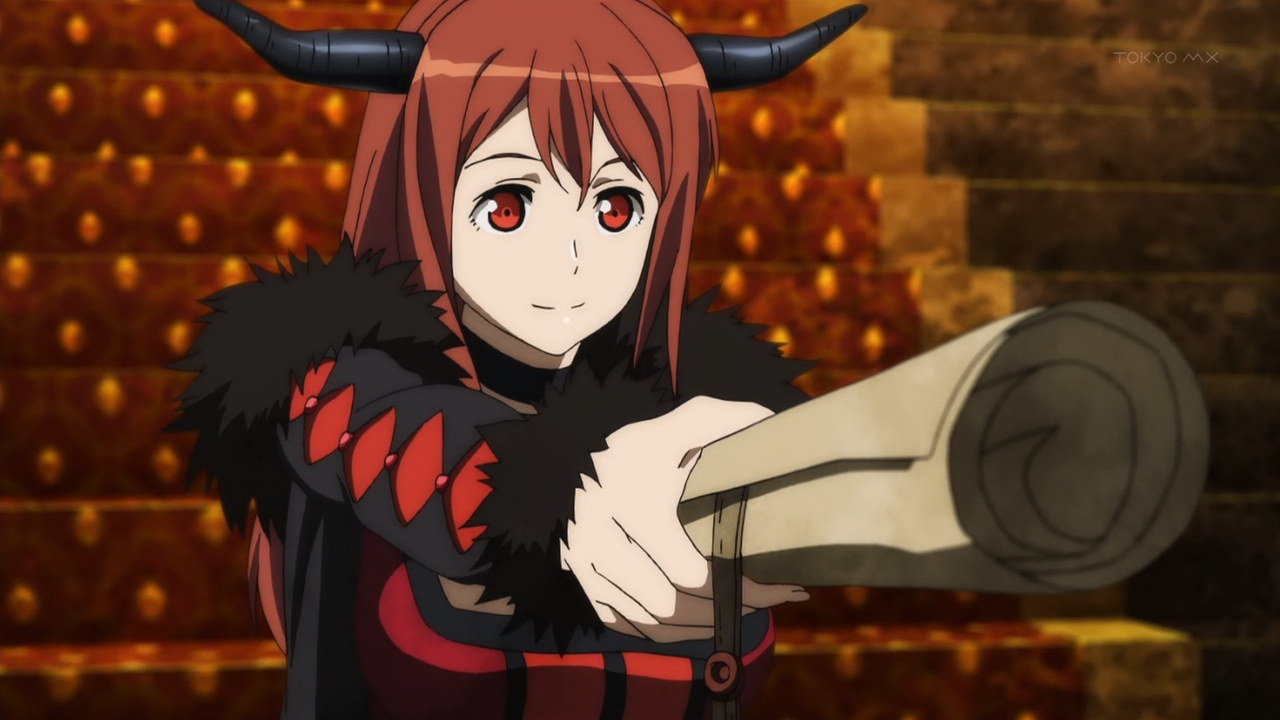 Demon Queen Maou is the main protagonist of the show who is the supreme leader of the demon realm. She teams up with Hero later and disguises herself as noblewoman known as the Crimson Scholar to blend right in with the people of the human world. She has a lot of knowledge on topics like Economics and Farming as she is from a clan of demons who prioritize knowledge over everything. This clan of demons can always be found in a hidden dimension called the Exterior Library where they have access to information from many different alternate universes. She is a woman of average height and has black horns popping out of her head full of red flowing hair.

Maou is usually a very calm and polite person, which is very surprising considering that she is actually a demon. Even when the Hero barges inside her castle to kill her, she politely greets him with a “Hello” which throws him off guard and kills his urge to attack her. She is very insecure about her large bust and tries to hide it by wearing less revealing clothes. Being the Queen, she does show the traits of a leader and is very intelligent but even then, she is also very childish and goofy a lot of times. 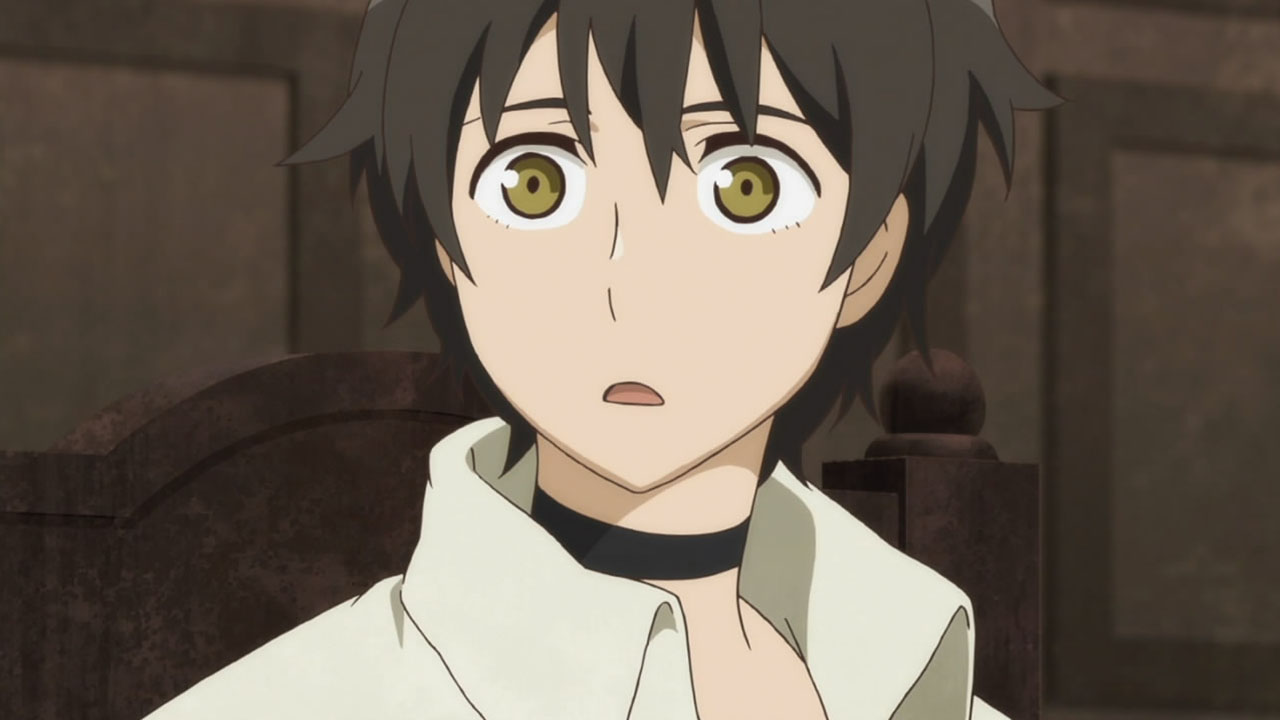 The Hero Yuusha is the main protagonist of the show who is known to be the greatest human warrior. He sets out to the demon realm with the intention of killing the Demon Queen, but instead, he is convinced by her to join forces and bring a peaceful closure to the war between humans and demons. He looks like a young guy with an average height and physique. He has messy dark brown hair with bangs reaching his eyes. He always sports a black turtle neck collar around his thin neck. He has a strange weakness for beautiful women and that’s why he is startled by how amazingly beautiful the Demon Queen is.

He has a very strong sense of justice and absolutely despises the war between the demons and humans. He initially hates demons but later, his perception about them changes after he meets their Queen. Though he hates the whole idea of war, he hates sitting back and watching the world around him getting destroyed. This sense of purpose drives him to become one of the best human warriors against the demons. He has a strong set of beliefs and he courageously takes action against all wrongdoers.