Where Are Married At First Sight Season 2 Couples Today? 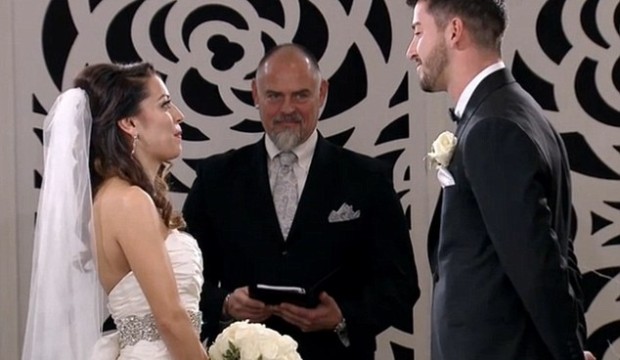 ‘Married At First Sight’ is a reality TV docu-series that follows the journey of couples paired up by relationship experts, who agree to marry each other when they first meet. These couples go on a honeymoon and spend eight weeks living together, after which they must decide if they want to continue with their relationship or get a divorce.

The second season of this series, just like the first, featured couples from New York City and Northern New Jersey and was packed with fights, romance, drama, and intimacy. If you’re wondering what happened to these couples after their time on the show ended, you’ve come to the right place because we have all the details for you. So, what are you waiting for, keep scrolling!

When Jaclyn and Ryan first met, Ryan was completely smitten with his wife. Jaclyn, however, found him unattractive and had trouble adjusting to their new relationship. As time went on, though, she gave him and their relationship a chance and found that she could see herself falling for him. In a strange turn of events, though, the more Jaclyn tried to connect with him emotionally, the more Ryan started to pull away. But, despite all their differences and problems, the couple decided that they wanted to give their marriage a try and agreed on staying married.

During their six-month reunion special, the couple admitted that their marriage wasn’t working for either of them and that they have gotten divorced. Ryan still lives in New York and works as a real estate agent, focusing on his family and career more than anything. He has an adorable dog called Daisy and seems to be living the best bachelor life.

Jaclyn, on the other hand, has moved on and is married. She has never revealed the name of her husband or any wedding pictures, but she can be seen wearing rings on her finger. Jaclyn is always careful to never even tag him in the posts she uploads on her Instagram. Not only that, but she is also a mother. She gave birth to their daughter, Alaina Rose, in November of 2019, and now she seems happier than ever!

I’ve graduated to the 35-44 age bracket! If I can contribute any words of wisdom- try not to let pressure from society or yourself, make you feel you need to be at a certain place in your life by a certain age. Your person is out there so don’t settle for anyone less than the ying to your yang! ☯️ #35yearsyoung

The then 34-year-old pharmaceutical saleswoman and the 35-year-old trauma nurse were all over each other during the beginning of their relationship. Their honeymoon in a ski resort went blissfully, but when they came back to the real world, problems started rising. The couple couldn’t agree on living arrangements as either of them wanted to compromise, so while Davina stayed at her Upper East Side condo in Manhattan, Sean lived at his place in New Jersey. And when Sean gradually stopped making efforts to travel all the way to meet her, their marriage collapsed. They both agreed on splitting up during Decision Day.

Although they couldn’t find romantic happiness together, it looks like they have found love apart. Davina got married to Donald Davis in October 2016 and has since changer her surname to her husband’s. She is also a mother now. Davina gave birth to her first child, a baby boy named Hudson in May of 2019. She is still living on the Upper East Side with her family.

This is real life. We were supposed to be in CA for the Holidays, but a sick baby and husband kept us in NYC. So, we wore our preordered matching Christmas PJs and had to take selfies instead of having family around to take “Instagram worthy” pics. I have so much gratitude for my little family in the midst of all the chaos and imperfection. I wouldn’t have it any other way❤️🎄. #gratitude #family #firstchristmas #christmas #matchingpajamas

Similarly, although Sean is very private about his personal life and has kept his Instagram account private, his bio does state that he is married and is expecting his first child.

Jessica and Ryan had the most interesting relationship out of all the couples in this season, and not for good reasons. Yes, they did have an initial connection and found each other attractive, but due to their personalities and nature, they clashed a lot. Their disagreements went from nothing to full-blown fights in the span of just seconds, but still, due to their original attraction, they decided to stay together when Decision Day arrived.

Their volatile marriage came to an end just a couple of months after the filming of the show ended. Jessica claimed that Ryan was verbally abusive and used to threaten not only her but her entire family. Therefore, she filed for divorce and a restraining order. Ryan has, of course, denied all these allegations.

#ad @flattummyapp is the biggest supporter of my 2020 goals, and I’m ALREADY on track to be my best and healthiest self. Whether the goal’s to lose, gain, or maintain.. It has programs designed to help smash 2020! Let’s get it – download the FREE trial now!

Jessica is still living in New York and is currently trying to pursue a career in modeling. She does a lot of paid partnership posts on her Instagram with Flat Tummy App and hopes to get the traction that is needed for her career to take off. It also looks like she is in a very happy and healthy relationship with a man called Sergio.

As for Ryan, he is not very active on his public social media page, so not a lot of what he gets up to or his current relationship status is known to us.