Where Are Married At First Sight Season 8 Couples Now? 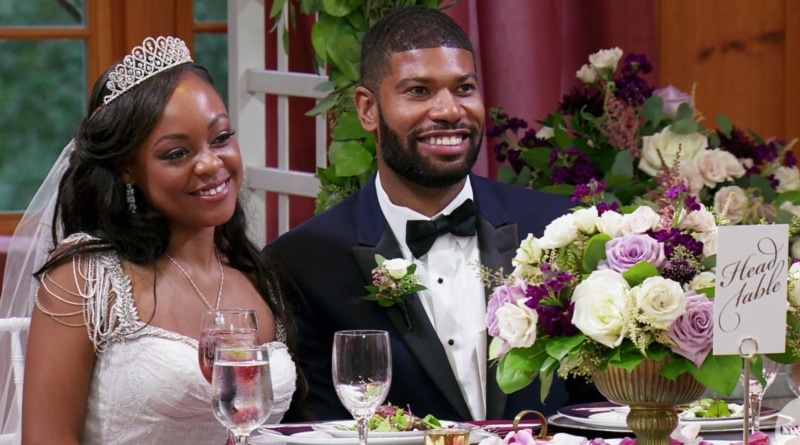 Lifetime’s ‘Married At First Sight‘ is one of the most unique and entertaining reality shows on TV right now. As the name suggests, single individuals are paired together, and they meet for the first time on the day that they are about to get married. Not only is the show intense and awkward at times, but it is full of romance and drama as well.

Season 8 of this series premiered in early 2019 and introduced us to 8 such individuals, or four couples, from Philadelphia, Pennsylvania. If you’re wondering what happened to these couples after their stint on the show, then keep on reading!

The 35-year-old financial consultant Stephanie Sersen was paired up with the 37-year-old President and CEO of a recruiting company AJ Vollmoeller, and from the very beginning, they seemed like a perfect match. But soon, when their personalities started clashing and AJ’s temper was revealed, things got a little out of hand. While Stephanie is a quiet and reserved person, AJ is more outspoken, so she wondered how they would make things work. Fortunately, they learned how to balance each other, and since their chemistry was out of this world, they decided that they want to stick together on Decision Day.

#TBT the way I looked and smiled at her on day 1 is STILL the way I look and smile at her every single day! Was it love at first sight and I just didn't realize it??? . #damnitialreadypostedthispic #ohwell #9/8/18 #itwasdefinitelylustatfirstsight #hubbahubba #eattravellove #marriedatfirstsight #mafs #stayj @stayj_mafs

Since their time on the show has ended, it seems like Stephanie and AJ are making the most of life. They are traveling the world together and have visited places like Zimbabwe, Australia, and Belize, amongst others. In fact, they went to Australia to celebrate their first wedding anniversary. Having written a self-help book by the name of How To NOT Get Hired, AJ is now an author and Stephanie; she’s getting ready to launch her travel blog. The couple even has a joint Instagram account, so be sure to check that out.

#tbt to Australia from our anniversary since I’m finally loading pictures! The opera house photos was such a fun treat, to get us some frameable pictures to remember. Which one is your favorite? 📷 @kyffinb 📷 @mosesj.rodriguez

Jasmine McGriff and Will Guess

Jasmine McGriff and Will Guess were a couple that had their fair share of issues during their time on the show, but fans still believed that they could work things out. The 30-year-old assistant director and the 37-year-old financial analyst were both very independent people, so when it came to merging their lives together to start a new one, they both had trouble adjusting. When Decision Day arrived, after a bit of hesitancy, Jasmine said that she wanted to continue their relationship, but Will, surprisingly, said no, and the two ended their marriage on not the best terms.

“In order to have what you really want, you must first be who you really are” – @attackathletics ———————————————————————— Last but not least, young lady 4 of 4…. soooo much I could say….. but I don’t want to write a 📖, so I’ll try my best to summarize. ———————————————————————— From the moment I got a glimpse of the kid seen in slide #7 in tryouts, I became a fan that seen potential, and couldn’t wait to coach her. Since that day our relationship can literally be defined by the cliché … #bloodsweatandtears , we’ve had our ups and downs as any #pointguard And coach would have.———————————————————————— And it was through those ups and downs, blood, sweat and tears that I truly learned who this young lady is as a person and recognized the many similarities (good & bad) our athletic careers had. We’ve had countless conversations covering basketball & life …. and the one thing I hope she takes from all of our talks is how to permanently unleash #CAYFRAZIER…. as that’s my favorite player and a person i’m confident will be successful…but if not #CoachWill is always here for you with 🏀 & #Life …. #adopteddaughter #family #deeperthanbasketball #willlovethekids #mindovermatter #keeppushingforward #protectyourdreams #pureathlete #soccer #promisewillneverbebroken

According to their respective social media profiles, it looks like they have both moved on from their experience and are trying to live their best lives. In a post from September 2019, on what would’ve been their first anniversary, Jasmine uploaded a picture of herself looking fantastic, and in the caption, included, “I am saving myself and my heart for the right man. Patiently preparing myself for the day he enters my life.” which means that she is currently single. Will, too, appears to be single and seems to be focusing on his coaching career.

Would've been our 1 year anniversary today… Our wedding day was on the 6th Our ceremony took 6 minutes… Our marriage lasted 6 weeks… 666-lol-j/k Regardless of the outcome I have grown tremendously throughout this past year. I was never the victim, but I was always the student. I am saving myself and my heart for the right man. Patiently preparing myself for the day he enters my life. My family and friends have wrapped me up with support in this past year…my life wouldn't be the same without @livewith_a_smile @maryodira @fitbeautynbrains @flawlessmarvellous @thegeorgemcgriff Dress and shoes from @boohoo Special thanks to @mafslifetime @kineticcontent for choosing me to partake in such a exhilarating process… Wishing the current couples all the best…

Kate and Luke’s relationship on ‘Married At First Sight’ is probably one of the most famous ones in the series and not for the right reasons. While things seemed to go well in the beginning, their relationship went south on their wedding night itself and could never recover. Luke refused to sleep in the same bed as his wife, and even though they were intimate, he pushed her to lie in front of the cameras and the experts. Luke also went as far as to lie to the production team about Kate having a drinking problem, so it was no surprise that when decision day arrived, both parties said no and decided to break up their marriage.

Felt cute might delete later… 😂 jokes. Thanks #mafsfam for inspiring me to be presentable yesterday for Easter/our fun TikTok 🥰

Both Kate and Luke have happily moved on with their lives. While Kate is busy running her own lingerie and sleepwear brand, Hidden Intimates, and traveling the world, Luke has his own podcast by the name of Cuccurullo Conversation to keep him on his feet. Although both of them are currently single, they have never seemed happier.

#stayhomer #ironic Can’t convince me that it didn’t happen

Kristine and Keith’s chemistry on the show had us hoping that they would go all the way. The then 29-year-olds seemed to be perfect for each other, but when Keith’s behavior and maturity level came to light, their relationship got a little complicated. The newlyweds lived with Keith’s family members throughout their time on the show, and Kristine told him that she expected him to do household work as well. She wanted to depend on him and do everything together. Even though their journey wasn’t smooth, Keith and Kristine both kept their patience and, in the end, decided that they wanted to try and make their marriage work.

We made it!! 365days-52weeks-8,760hr of ❤️ and hard work. We’ve grown so much together. For better for worst. I can’t wait to spend many more #marriedatfirstsight #mafs #love #anniversary #couplegoals #philly #phillyphilly #philadelphia #marriage @Kay_kills Ps: we started a YouTube channel!! Link in the bio photo cred: @iambarbarabonds & @terrenceharrisonweddings

Now, the couple appears to be happier and stronger than ever. Kristine and Keith not only learned how to trust each other and depend on each other, but they also started their married life in their own home after the cameras went away. They are both focusing on their relationship and their respective careers to ensure that they can live the best life possible.