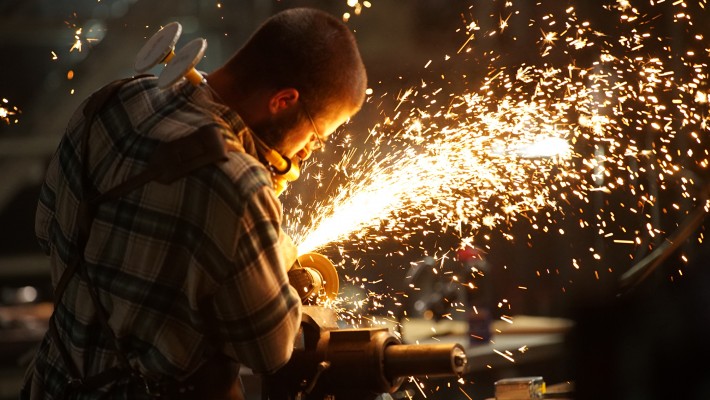 In each episode, three best weaponsmiths have to compete against each other in two rounds which contain historical challenges. The weaponsmiths will re-build the weapons to change history. From the blades of the Vikings to the firearms of the frontier, various types of weaponry is used from different eras. The weapon’s accuracy, velocity as well as durability will be decided by a former Army Special Operations Sniper, and a panel of judges will give scores to the weaponry in the field as well as in the armoury. In the past, the greatest kings were dependent on weaponry artists to build bows, and ballistics and have won the war and changed history. The modern weapons smiths have to use their creativity and technical knowledge and put their weapons to the test in this series. Contestants are many, but the winner is only one. After each challenge, the player gets eliminated every week, and only one weaponsmith walks with the title of “Master of Arms” and $10,000. The series is executive produced by Bill Howard, Brian Nashel, Chris Rantamaki, Todd Lubin, Jay Peterson, and Matthew Valiadis.

Master of Arms Season 2 Cast: Who is in it?

The four armaments experts of the Master Of Arms season 1 are Ashley Hlebinsky who is one of the leading firearms historians in the country. Nicholas Irving is a former Sergeant within the Special Operations unit. He also served as an assaulter, designated marksman, machine gunner, 75th Ranger Regiment 3rd Ranger battalion as well as a sniper. Zeke Stout is a certified firearms specialist. He worked in gunsmithing schools as well as an executive at one of the largest firearms. Trenton Tye is a professional blacksmith who has 20 years of experience in gunsmithing, casting, armour, making knives as well as ancient arms.

The weaponsmiths for the next season are not disclosed as the season hasn’t been renewed yet. We will update with information on Master Of Arms’ season 2 cast when we have the list of the new participants. Stay tuned to know more.

Master of Arms Season 2 Plot: What is it about?

In the first episode of the first season, two expert weapon smiths compete against each other using battle-axe and flintlock. They aim to make the 16th-century battleground weapon realistic so that it appears more brutal. The panellists as well as Spec Ops sniper judge their performance and give points to the appropriate weapons. But there is only one winner who will win the title and a sum of $10,000.

In the next episode, three weaponsmiths are put through a challenge where they have to make use of legendary weapons that were welded in the past to win the prize money. The panel experts judge three of these craftsmen and special operations legend tests their weapons. In the next episode, three craftsmen try to relive the battle of Revolution. The special operations’ sniper tests the American Flintlock Long Rifle and the panelists pass their judgments. Again, one craftsman takes away the prize money. In another episode of Master of Arms, the craftsmen battle to recreate the iconic shotgun named Blunderbuss. The gun gets tested again by the Special Operations’ sniper and is determined by the judges.

Further, they create an 18th-century flintlock grenade launcher made up of raw metal and wood. The special operations’ legend completes his task by checking and passes it to the panellists. Another episode features the U.S. Navy’s Elgin Cutlass Pistol as well as the 19th-century gun-knife. The craftsmen create the weapons to battle and win the prize money of $10,000. In the next episode, these talented craftsmen come in a face-off to create an arbalest crossbow made out of pure steel and raw rood. The weaponsmiths once again prove to the audience that bows were the first weapons to rule the battleground. The weaponsmiths are then given a task to create armaments from the modern era. They showcase their talent by building a dangerous 1913 Cavalry Sabre which was used in World War I and a lethal trench knife. In the last episode, these weapon smiths challenge each other to create two legendary weapons such as a Joan of Arc Sword and Ball & Chain Flail. The one who impresses the panellists and passes the test gets to win the Master of Arms title and walk home with $10,000.

Master of Arms Season 2 Release Date: When will it premiere?

Discovery Channel has not released any official statements for the new season of Master Of Arms. Fans are hopeful that Master Of Arms season 2 will be renewed soon. Keep an eye on this section to find out more about season 2 and its tentative air date.

While you wait for updates on season 2, watch the third episode of season 1 above. We will update this section soon enough.