The final episode of Netflix’s ‘Messiah’ feels like a nightmare that we sort of saw coming, but were still not ready for. The tenth episode feels more like an aftermath to all the action that takes place in the previous one. It is heart-wrenching to watch as each character’s life falls apart. All because of one man.

What makes the finale of ”Messiah’ so thought-provoking is that it explores how an idea can destroy masses. It majorly works as a suspense thriller purely based on that one idea, and to be honest, it doesn’t even matter whether or not its real.

The viewers overtime realize that this is the idea that will serve as the metaphorical bomb and blow everything up. All because of how blindly people begin to believe in it. As Messiah says to Avi in the plane, everything is a choice. It is a choice that these individuals made, out of desperation, innocence, and even narcissism to believe that they were chosen and that they could be saved. The episode is then aptly titled “The Wages of Sin”, as each character pays a price for their choices. The Bible states that “the wages of sin is death”, this makes a lot of sense as the season comes to an end. Not only do people die, but so do beliefs, faith, and innocence. 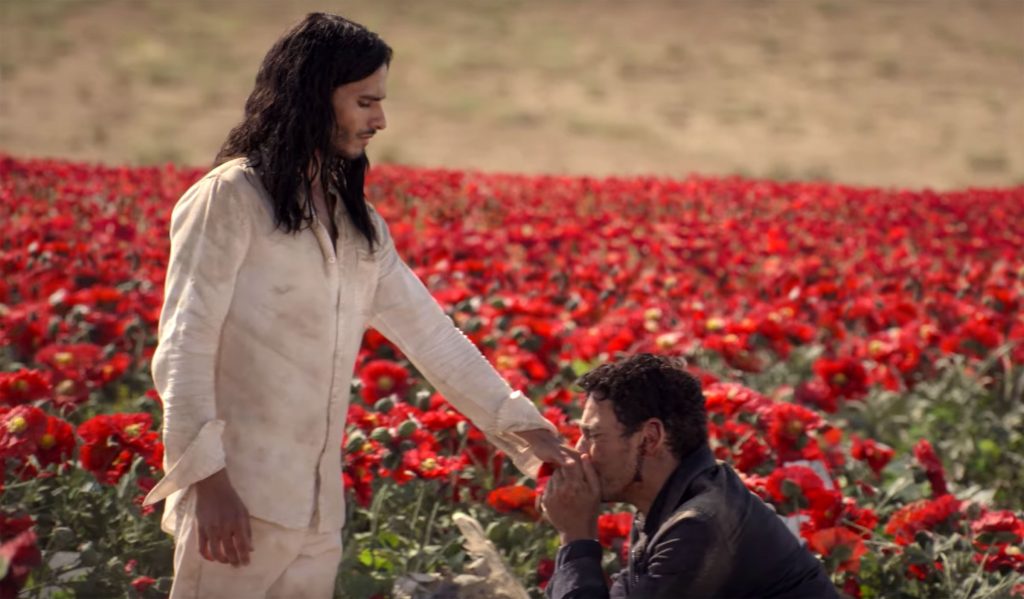 The episode opens with a flashback from 2011 in Megiddo, where Aviram and his partner are on a mission and they abduct a young boy from a bakery for interrogation after a shootout takes place. Back in the present, we realize that Aviram and his men are the ones who abduct Al Massih, but the man remains calm. All of them then board a diplomatic plane that leaves for Israel. We realise that Collier and Danny were the ones who made the deal with Shin Bet to send Massih back.

Meanwhile, the news of the bomb blast at Ramallah mosque reaches Geller and Bailey. Geller regrets not being in West Bank like she was supposed to. We learn that there have been several deaths from the bomb blast. Qamar is severely burned and most likely dead. Jibril is found in a similar condition as the paramedics take all of them to the hospital. He opens his eyes and sees the people passing by. He sees Qamar next to him, who lies unconscious, and holds his hand.

We learn that Rebecca had a severe seizure and nearly lost her life. Both Felix and Anna are extremely worried, but Felix still wants to know if she knows where Massih is. Rebecca tells him that he left, and she doubts that he will be coming back. This angers Anna who tells Felix to get some perspective as he nearly lost his daughter.

At the news office, Miriam is working on a story on the bomb blast. She’s then called by Collier who gives her the top secret file on Al Massih, a.k.a. Payam Golshiri. The file has all the information that Geller collected. Despite being unclear of his intentions, Miriam decides to go ahead with the story. She goes on to call Al Massih the Hoax of the Millenium, revealing all information about his life, and the news becomes viral everywhere.

Just as this is taking place, we have Jibril, Rebecca, Felix, Anna, and Staci watching the news as their lives fall apart. Staci’s daughter, Rae, has a major attack and passes away, as the news continues to play in the background. Jibril watches the same news in Arabic as he lies in a hospital severely injured. The same happens at another hospital, where Rebecca and her family watch the news, which really bothers Felix who leaves the hospital. He’s cornered by the media channels and runs away. Deeply disturbed, he goes back to Dilley, burns his church and breaks down.

Meanwhile, in the plane, Massih and Aviram talk, where Massih doesn’t seem bothered at all. He talks about God to Avi and tells him to confront his sins as the last face he sees before he dies will be of that young boy. A few moments later, the backside of the plane blows up. Avi begins to remember Megiddo. We learn that the young boy is the son of Nuaimi, the man who killed many, including Avi’s mother. Aviram tells him that he will have to pay for the sins of his father, and shoots him. Back in the plane, Avi begins to break down as looks at Massih and mutters “I’m sorry”.

As all of this happens, Geller is trying to track the plane. But when the plane just suddenly disappears from the map, she realizes what just happened. Geller too break down. She then confronts Collier for taking down a diplomatic plane. He denies it but it is apparent he was responsible for it.

The plane crashes in the middle of a flower field, with bloodied bodies lying around. A young boy named Malik, who loves telling stories discovers it. Avi wakes up to Massih looking at him. Malik tells him that he was just raised from the dead along with another man by Massih. Avi wakes up disbelief and sees the other man kneeling down and kissing Massih’s hand. The episode ends with Massih looking straight at the camera.

It seems like everything falls apart in the season finale of ‘Messiah’. The episode wasn’t as fast paced or intense as I had expected it to be. Neither did it really answer any of the questions we had hoped for. But it was heartbreaking to watch the domino effect that brings down every life connected to Al Massih. Personally, I believe that the previous episode was the strongest of the season because of how chillingly tragic and heart-wrenching it was to watch.

The finale then seems more of an aftermath to all the action that takes place in the ninth episode. It also really does not solve the mystery of Al Massih, and leaves us as perplexed as ever. This is, of course, both a good and a bad thing, as it still manages to keep us on our toes as we still try to figure out who the man is.

But this doesn’t take away the fact that so many lives get destroyed because of him. Though we learn that Jibril and Rebecca are both alive, it becomes nearly as traumatic as they wake up see that all they had stood for was lies. There is no news on Samir, and one can assume that since he was the one wearing bomb, he passed away. Qamar too is nearly dead. What was most heartbreaking to watch though was young Rae passing away. To think of the guilt Staci will live with all her life for following an illusion that cost her the life of her child. Similarly, though Felix becomes growingly irritating as the show progresses because of his blind faith on Al Massih, the ending makes one feel nothing but sympathy for the man as he burns down his church.

Now, when it comes to Al Massih and the plane crash, the ending leaves the viewers nearly as torn about the man as they were during the beginning. Introducing Malik as a boy who loves to tell stories becomes an interesting angle to add to the ending. We really don’t know for sure if Al Massih rose Avi and the other man back from the dead, or if it’s just a story Malik makes up when he sees Massih near the men. Of course, this doesn’t explain how Massih survives the crash and is also able to take care of Avi and the man. He could have been incredibly lucky, but that still doesn’t explain half the miracles he was able to perform. Let’s hope for a second season to answer.