Will There be a Midnight, Texas Season 3? 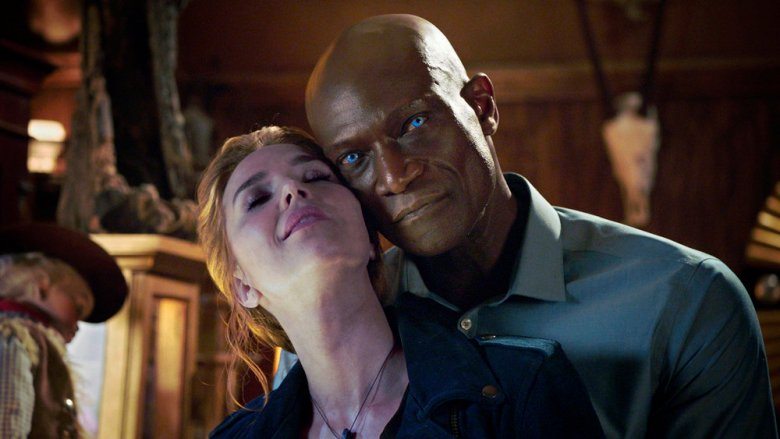 ‘Midnight, Texas’ is an American supernatural drama that airs on NBC. It first premiered on July 24, 2017. The show is based on the book series of the same name and has been written by New York Times bestselling author Charlaine Harris, who has also written the ‘The Southern Vampire Mysteries’. Notably, these novels were made into the popular show, ‘True Blood‘. Anyhow, coming back to ‘Midnight, Texas’, the series has been created by Monica Owusu-Breen.

The series is based on characters who are supernatural and who band together to form an unlikely family that stands up to the potential threat from outsiders. The premise of the show has been enough to attract fans, but critics have not been all too favorable saying that the show is along the lines of juvenile silliness, and lampooning it, stating, “No amount of sex and violence can disguise the fact that this is reductive dramatics, aimed at the bottom of the audience’s intelligence, and the show lacks the self-awareness to realize it.”

After two mediocre seasons, ‘Midnight, Texas’ season 3 was cancelled. Before we delve into the reasons why that happened, let’s first quickly recap the show.

Midnight, Texas Cast: Who is in it?

The main cast of ‘Midnight, Texas’ includes François Arnaud as Manfred, a charming, powerful psychic who can communicate with spirits and finds safety in Midnight surrounding himself with both human and supernatural allies. It also stars Dylan Bruce as Bobo, proprietor of the town’s local pawn shop; Parisa Fitz-Henley as Fiji, a witch who owns the local Wiccan shop; Arielle Kebbel as Olivia, a mysterious assassin with a weapon for every occasion; Jason Lewis as Joe, an angel who knows all of Midnight’s secrets, having been around for millennia; and Peter Mensah as Lemuel, a wise vampire with a long history in Midnight.

The above cast members are supported by a host of recurring stars that include the likes of Jaime Ray Newman of ‘General Hospital‘ fame as Patience Lucero, one of the owners at a new hotel that opens in Midnight.

Midnight, Texas Plot: What is it about?

In ‘Midnight, Texas’ the titular town is remote and no one is quite who they seem. Vampires, witches, psychics, and angels gather together in the safe haven, fighting off outside pressures from rowdy biker gangs, ever-suspicious cops and their own dangerous pasts, banding together to form a strong and unlikely family. We see Arnaud’s Manfred defeating the demon Colcannar, who threatened to obliterate the veil separating the supernatural world from ours. Though the victory saved the day, the quirky desert town was soon hit with another invasion: developers, who looked to turn the supernatural hideout into a tourist mecca.

The psychic on the run from his past when he finds a family there, and they band together to keep their home safe from all outside threats. The truth of the matter is, ‘Midnight, Texas’ stays away from the gore, sex, and violence that marked ‘True Blood’ but fans of the genre will enjoy the themes of soapiness and horror that are present across the seasons. The series starts when Manfred is on the run from debt collectors, and following his dead grandmother’s advice, he heads to Midnight. However, it appears as though his arrival is tantamount to some sort of prophecy of Satan himself rising up because after he arrives, the town goes through one crisis after another. It is a testament to the perseverance of the band of outsiders in the town that they keep averting these crises. The core of the show, however, is rather bland, and there are some touches of character-driven darkness. However, it is never fully explored, and critics have been more or less justified in giving the show a cold shoulder.

However, one theme that does stand out throughout the series is the importance of family. All the supernatural characters in Midnight, put aside their differences and they stick together. This is simply because they have no place else to go where they might feel as safe, or where they might feel like they belong. Another outstanding aspect is the danger posed to a way of life by human society itself, and their plans for development. It strikes a chord that in our quest for mindless modernization, we might be destroying something truly magical.

On December 21, 2018, NBC canceled the series. This is primarily because the show began to lose out on viewers in season 2, and critics too have never been very fond of how the series dealt with its story or its characters. Thus the news of the cancelation does not come as much of a surprise. However, Universal Television, the producing studio, is not giving up hope and they are looking for another home for the show. There is always a demand for supernatural drama, so there’s a slim chance of some other network picking up the show. But for now, ‘Midnight, Texas’ Season 3 stands cancelled.

Read More in TV Preview: Game of Thrones | The Orville

Check out the trailer for Season 2 to refresh your memories. If you have not seen this series and happen to like shows about supernatural creatures with a good bit of drama thrown in, then you might want to check this one out.