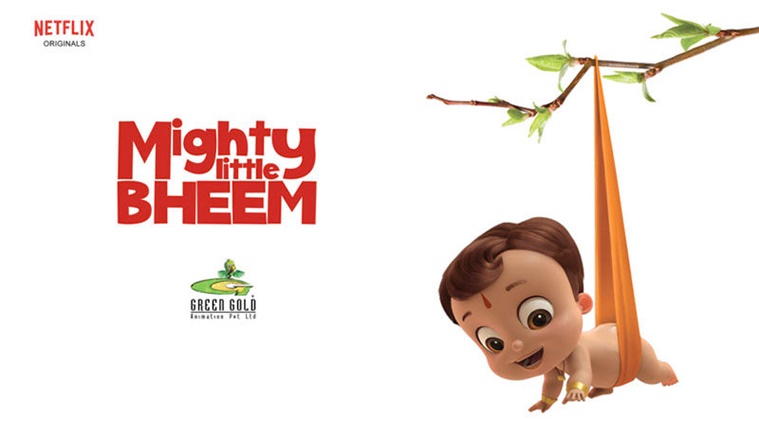 ‘Mighty Little Bheem’ is Netflix original series that first premiered on the platform on April 12, 2019. Primarily aimed toward preschoolers, this animated cartoon series is produced in collaboration with the Hyderabad-based Indian animation studio – Green Gold Animation. The show’s creator is Rajiv Chilaka, who is also behind the development of ‘Chhota Bheem’ — the popular, 11-year-old Indian kids’ cartoon programme.

‘Mighty Little Bheem’ is based on another popular show titled Chhota Bheem that has been airing on Turner Broadcasting’s Pogo TV channel from 2008 and has also inspired several TV films and three feature films. The show revolves around the mythological character Bheem from the Indian epic – the Mahabharata.

The central character of ‘Mighty Little Bheem’ is the toddler Bheem, who has the rare gift of immense superhuman strength. Little Bheem uses his powers to protect his hometown from all kinds of dangers that often plague the village. Each and every member of Dholakpur, including Raja Indravarma, seek him out when they need advice or solutions for their problems. These issues can range from attacks by wild animals, demons, and robbers to mysterious disappearances and even dire situations.

Bheem, the little guardian angel, is forever ready to help the weak, needy, impoverished, and wronged masses. He also represents his village in several competitions that require the display of physical strength such as wrestling, cycling, and others. Bheem is a great lover of food, especially laddoos (an Indian spherical sweet), he is fit, wears a loincloth, has brown hair, and always sports a tilak on his forehead.

Accompanying Bheem in his quests are his close friends Chutki — the daughter of the village laddoo maker, Raju — who considers Bheem as his role model, and Jaggu — the talking monkey. The antagonists include Kalia — the muscular bully, identical twins Dholu and Bholu — his followers, and Kichak — a 16-year-old wrestler.

Mighty Little Bheem Plot: What is it about?

‘Mighty Little Bheem’, as we already mentioned, is another addition to the ‘Chota Bheem’ franchise. The parent series’ plot revolves around Dholakpur, where the brave, witty, and strong Bheem, along with his team, solve problems, unravel mysteries, and fight injustice, thereby, keeping the villagers from harm’s way. During his adventures, he often has to tackle Kalia and his sidekicks, who always plot to beat Bheem, but are forever unsuccessful.

Just like its predecessor, ‘Mighty Little Bheem’ focuses on the earlier, preschool days of the protagonist. In this non-verbal, slapstick comedy, our intelligent, curious, and powerful toddler encounters several adventures as he travels through the village, often in search of his favorite laddoos.

However, there is a little difference between the two shows. While the TV series shows a 9-year-old young boy, the web version revolves around baby Bheem, who is around 15 months old. According to Chilaka, he introduced this change since this story is mainly aimed toward pre-schoolers, aged between two to six years. Moreover, as Bheem still cannot talk or walk, there are no dialogues in the show. However, music plays an integral role in the entire storytelling process. Moreover, without dialogues, the show also delivers a global twist — thus appealing more to the international audience. As per Andy Yeatman, director of Global Kids Content for Netflix, “We’re excited to partner with Green Gold Animation and announce an original show that will bring great storytelling, based on one of India’s beloved characters, not just to India but to kids and families around the globe.”

Mighty Little Bheem Season 3 Release Date: When will it premiere?

‘Mighty Little Bheem’ Season 2 premiered on Netflix on August 30, 2019. All its episodes aired on the same day in 190 countries. With the addition of this latest Indian show, Netflix seems to be on a roll while bringing in more and more original content from the country. We have already witnessed the huge success of other Indian originals such as Sacred Games and Selection Day. Now, after the inclusion of this beloved animated character in its catalog, this streaming giant takes another step toward bringing the best-in-class, mythical tales to young audiences internationally.

It seems like Netflix is very invested in bringing other foreign, famous cartoons such as ‘Mighty Little Bheem’ and South Korea’s YooHoo & Friends to its international audiences. So, we are very positive that the show will be renewed. You can expect ‘Mighty Little Bheem’ Season 3 to release sometime in December, 2019.

Here’s the trailer of Season 1 of the show to give you a better idea on what the show is all about.