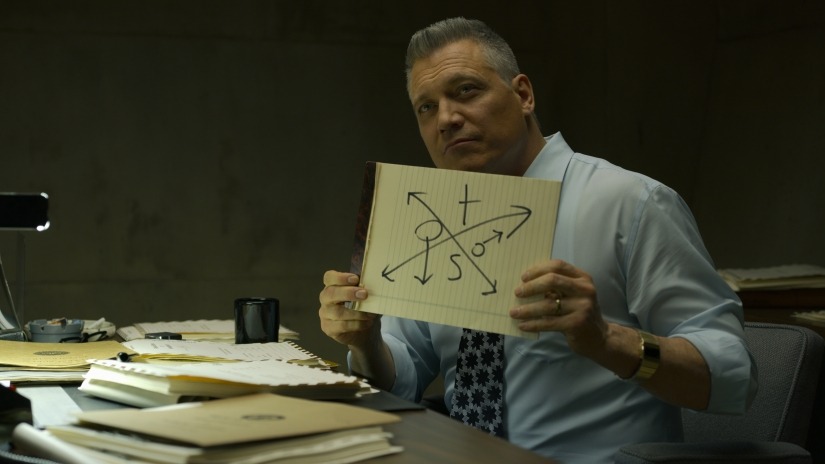 Episode 6 does not waste any time in showing how things are heating up in Atlanta. The BSU is hot on the tail of the child murderer which naturally takes their focus away from the BTK killer. As we said earlier, the last few episodes are likely to see the team stretched like never before build the database, while tracking the BTK killer and the Atlanta child murderer.

Things seem to be getting increasingly complicated for Agent Tench, who happens to be moving up the ladder in the workspace, but his personal life appears to be in shambles as his son simply cannot cope with the consequences of what happened with him. ‘Mindhunter’ has been drawing parallels with the extremities of human nature in the killers and comparing them to the subtler deviances we allow to exist in our everyday lives. It is an interesting perspective of the human psyche and the show has been maintaining it over the last few episodes, especially when the focus has been on Tench or Wendy Carr.

Episode 6 begins with the BTK killer in a tough spot when a photocopy machine malfunctions, resulting in one of his poems with his signature mark getting stuck. He barely manages to get it out, avoiding suspicion. Meanwhile, Carr seems to be taking her relationship forward with the bartender, but the woman of science learns the hard lesson that theory does not always equal practice in the field when she is manipulated in an interview with a potential serial killer. The team at the BSU still attempts to try and make sense of the BTK killer’s psyche, hoping to apprehend him before he becomes more violent.

However, all of this is put on hold as the Atalanta case takes precedence. The FBI is officially roped in as part of the investigation and Holden and Tench are sent to stay there for as long as it takes in order to capture the killer. This puts Tench in a tough spot since he needs to be there for his family, especially as his son is reeling from the aftermath of being complicit in a child’s murder. However, he tries to make it work.

Holden does not seem to have learned his lesson in humility at all since he manages to antagonize the Atlanta police department with his grand theories which are potentially correct but receive pushback in the absence of evidence. Holden’s preoccupation with the psyche of the killer in the absence of any groundwork comes across as arrogance to some of the people.

Meanwhile the investigation continues in Atlanta as police find more bodies of children. They bring in a suspect for questioning.  Coming back to Tench’s personal life, his son begins to display worrisome behavior as he appears to be regressing emotionally and is later shown staring creepily at a girl playing in a park. This reminds us of what the director of the FBI tells Tench at the club about loners and misfits growing up with darkness in their lives to become incorrigible criminals. Could Tench’s own son display disturbing behavior that the head of FBI’s Behavioral Science Unit is blind to acknowledge?

Episode 6 bears all the marks of a show that is picking up its pace. The Atalanta child murders case is in full swing and we expect that Agents Ford and Tench will be getting to the bottom of it soon enough. We really like the new structure within the BSU which allows Gregg and Carr to go out and interview criminals for research purposes. While Carr has always been sure of the theories and sciences which back her points, it is nice to see her reconsidering her beliefs once she is actually in the field.

Holden’s apparent arrogance is getting a little tiring. Though he means well, he is getting a lot of pushback from the investigators who are ready to put a racial spin on the crimes. Unless he learns how to present his points civilly, we do not see him going very far in gaining the Atlanta PD’s attention. Tench, too, is not doing right by his family, since he should ideally be taking time off to be there for them especially when it is evident that his wife needs help with their son. Instead, he chooses to stay away, be it in Atlanta or at office parties. Tench might be doing a stellar job as an FBI agent, but it just might cost him his family in the episodes to come.