When Will Money Heist Season 4 Premiere on Netflix? 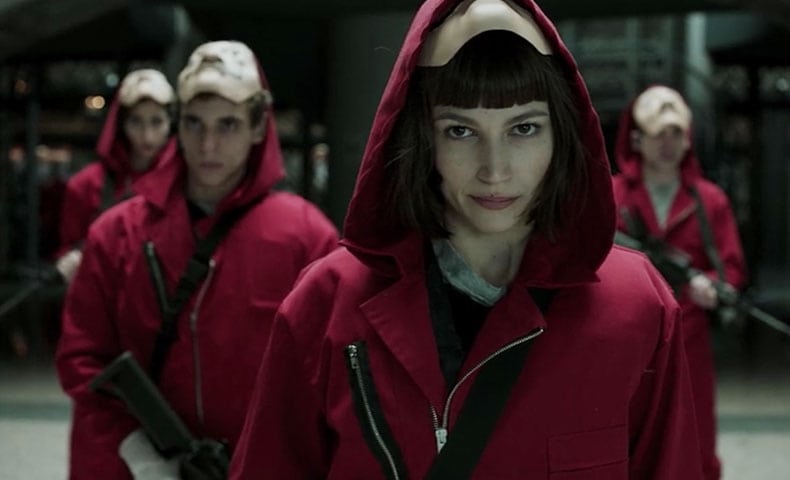 ‘Money Heist’, known as ‘La casa de papel’, literally translating to ‘The Paper House’ is a Spanish heist television series that first aired on May 2, 2017, on Antena 3, the Spanish network. However, it became an internet sensation only after its release on Netflix, which had picked it up for international distribution in late 2017.

Alex Pina is the creator of the show and also serves as the executive producer along with Sonia Martínez, Jesús Colmenar, Esther Martínez Lobato, and Nacho Manubens.

The addition of ‘Money Heist’ to Netflix’s library is just another example of how the streaming platform is branching out to include spectacular content from foreign markets. Another such valuable foreign addition would be ‘Suburra: Blood on Rome‘, which is an Italian Netflix original and one of the finest crime dramas on the platform.

Although ‘Money Heist’ was first intended as a miniseries, Netflix edited and released it as two separate seasons. Soon, the show gained widespread acclaim and proved to be a work of art and sheer brilliance. In its first quarterly report of 2018, Netflix revealed that it was the most-watched non-English language series ever on its streaming service. Soon, it was again renewed for a third season. Now the question is, will there be a ‘Money Heist’ season 4? Let’s find out.

When will Money Heist Season 4 release?

‘Money Heist’ Season 3 premiered on July 19, 2019, on Netflix, in all its entirety of eight episodes.

The show has been immensely successful over the last three seasons. While Netflix folks don’t usually like to continue shows for more than three seasons, the success of ‘Money Heist’ might prompt them to keep going. That’s exactly what happened! More importantly, there is still a lot left in the story that can be explored in subsequent seasons.

On July 27, 2019, Diego Ávalos, director of the show, confirmed that his most successful non-English-language production will have a fourth season. There’s also a release date. ‘Money Heist’ season 4 is slated to premiere on April 3, 2020. It will also comprise eight episodes.

Money Heist Cast: Who is in it?

The cast of ‘Money Heist’ is led by Alvaro Morte who plays Sergio Marquina or The Professor. Other cast members include Ursula Corbero as Silene Oliveira, the narrator, and the protagonist.

She is joined by Itziar Ituno as Raquel Murillo, Paco Tous as Agustín Ramos dos Hermanas, Pedro Alonso as Andrés de Fonollosa, second in command to the Professor, Alba Florez as Ágata Jiménez, Miguel Herran as Anibal Cortes, and Jaime Lorente as Daniel Ramos. They make up the crew assembled by The Professor, and each of them has a specific skill set that they bring to the table.

Darko Perić plays Yashin Dasáyev, a veteran soldier from Serbia, and Esther Acebo stars as Mónica Gaztambide. Najwa Nimri joins the cast as Alicia Sierra in season 3. Alicia is a pregnant inspector employed with the National Police Corps who takes charge of the case, previously handled by Raquel. Additional inclusions in the cast in season 3 are Hovik Keuchkerian as Bogotá, Rodrigo de la Serna as Martín, Luka Peros as Marseille, and Fernando Cayo as Colonel Luis Tamayo.

In the upcoming season, it has already been hinted that almost all of the lead cast members such as Morte, Corberó, Peric, Ituño, Acebo, Keuchkerian, de la Serna, Herrán, Peros, Nimri, and Flores will be returning to reprise their original roles.

Money Heist Plot: What is it about?

The first two seasons of ‘Money Heist’ revolves around a criminal mastermind who goes by “The Professor”, who has a plan to pull off the biggest heist in recorded history — to print billions of euros in the Royal Mint of Spain. To help him carry out the ambitious plan, he recruits eight people with certain abilities and who have nothing to lose. The group of thieves takes hostages to aid in their negotiations with the authorities, who strategize to come up with a way to capture The Professor. As more time elapses, the robbers prepare for a showdown with the police.

The show is clever, tense and brilliantly acted out. The heist drama almost feels like vintage ‘Prison Break‘. However, the aim here is to stay in until the job is done. It is a high-stress job too, to be locked into the Royal Mint of Spain, in Madrid, the capital city. The endgame of the plan is simple, to print 2.4 billion euros. However, this requires 11 days of seclusion during which the robbers have to deal with elite police forces and 67 hostages. And as you would expect, their plan is successful … or is it?

In season 3, we see the group come together for another mission. This time to save Anibal, who gets captured by authorities. Under the Professor, the team yet again manages to fool authorities with their clever antics and audacious planning. They plan a bigger heist in order to rescue Anibal. However, the stakes become higher than ever. The Professor is led to believe that Raquel is dead, because of which he plans DEFCON 2 — using RPGs against a tank rolling in to storm the Bank of Spain.

Agata receives a bad bullet wound and the Professor’s plan gets threatened when the new police negotiator appears to know what she is doing. Everything seems to go out of control for The Professor who does not seem to have a backup plan, after having broken his own commitment of owing never to have personal relationships.

Season 4 is expected to pick up the story from season 3 and follow the crew as they recover after Agata’s near brush with death. We will also see the lengths The Professor goes to in order to rescue Raquel.

What makes ‘Money Heist’ stand out is how well thought out the plans are. As anyone who has seen heist movies will know, how difficult it is to convince the audience into believing the plot. Then, there’s so much going on the screen that if the show is not executed well, not only the heist looks fake, the whole set up crumbles down. But ‘Money Heist’ suffers from none of those issues. It keeps getting better with every episode.

You can check out the teaser trailer for season 4 below. If you haven’t seen the show yet head over to Netflix to catch all the episodes of the previous seasons.