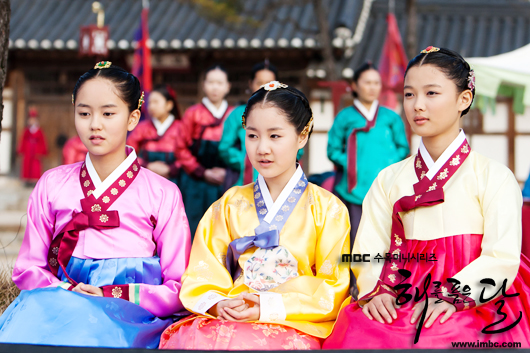 ‘Moon Embracing the Sun’ is a fantasy drama, which is the adaptation of a novel by Jung Eun-gwol. It is a fictional love story that mainly depicts the king of the Joseon Dynasty and a female with the surroundings mainly filled with conflicts and conspiracies of different political powers.

The series premiered on MBC on January 4, 2012, and is written by Jin Soo-wan. The first season consisted of 20 episodes with all of them being directed by Kim Do-hoon and Lee Seong-jun. The series has received widespread critical acclaim in South Korea. The first season won the 48th Baeksang Arts Awards in two categories, best drama, and best actor. It was also nominated for and won multiple awards at the 2012 MBC Drama Awards.

Considering the success of ‘Moon Embracing the Sun’ Season 1, fans might be wondering about whether there will be a Season 2. We are here to delve into that, right after we walk you through the show’s details.

Moon Embracing the Sun Cast: Who is in it?

The story of series mainly revolves around the King of Joseon and various people in and around the political circle. Kim Soo-hyun plays the character of an intelligent Crown Prince of Joseon who is the face of change in the state. The prince falls in love with Yeon-woo who is played by Han Ga-in, a smart young lady who was chosen as the Crown Princess but a mysterious illness lead to his demise.

The famous actor Jung Il-woo plays Prince Yang-Myung, who was ill-treated by his father, King Seongjo. However, Seongjo is heard saying that Yang-Myung is his favorite son but he keeps him tested so that he can protect his brother, Lee Hwon.

Kim Min-Seo also makes a crucial appearance as Yoon Bo-Kyung, the Second Moon. Yoon was framed by the Dragower Queen to achieve more in her stead, to be successful in her attempt to be the Crown Princess after Yeon-woo’s supposed death.

There are various supporting cast members who make up the Heo clan, the Royal Household, Star Mansion and the Yoon clan and their officials.

Moon Embracing the Sun Plot: What is it about?

The story begins when a palace shaman witnesses the assassination of an heir to the throne. Running for her life from those responsible, the young shaman is rescued and offered respite by a pregnant noblewoman.

Sadly the shaman is captured by the conspirators and tortured to her death. Only after pledging to protect the future of the noblewoman’s unborn child. This girl-child, Heo Yeon-woo, grows into a wise and beautiful young woman with exceptional wit, who mesmerizes the eye of the Crown Prince.

The two young lovers seem destined to be together and a royal jamboree is celebrated. However, the celebrations are taken down a notch when Heo Yeon-woo succumbs to a mysterious illness, leading to her demise. The death of his beloved left the prince broken at a young age.

As time passes by, the two clans are seen fighting over power and amidst all of this, a new shaman “Wol” (Han Ga-in) appears at the court. His aura and remarkable personality make people remember Heo Yeon-woo. When destiny pushes Wol and the grown King together, even the evil powers which were the reason for Yeon-woo’s death cannot set them apart.

The whole series has various elements with different layers of love and compassion at the display. Young child actors have pulled off massive roles and have done it flawlessly. While the famous Korean bromance still holds its place high in this series, there are some portions that are too cheesy for the liking of general audiences. However, if one loves to watch some cheesy scenes and giggle then it is perfect for them.

Overall, ‘Moon Embracing the Sun’ has a lot going its way including the acting talent at the display, which is pretty good. The credit lies with their child actors and older performers.

While the series shines a light on cultural education and is mostly an entertainer, it fails to live up to the expectations with drab writing and some questionable casting. While the local Korean people may be engrossed with Kim Soo Hyun’s star power in the show, still the lack of tight writing comes as a hindrance to the series becoming more successful.

Moon Embracing the Sun Season 2 Release Date: When will it premiere?

In the event that we do get another installment, ‘Moon Embracing the Sun’ Season 2 is likely to get a release date in 2022. We will keep you posted about any official updates, but in the meanwhile, you can watch Season 1 on Netflix.

You can check out the trailer for ‘Moon Embracing the Sun’ below.