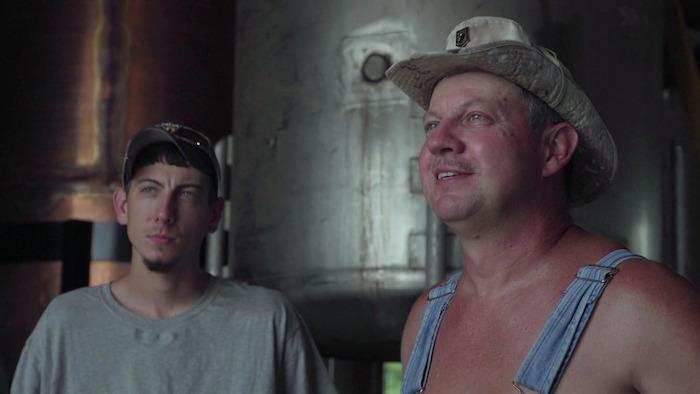 ‘Moonshiners’ is a gripping America docudrama television series that first aired on December 6, 2011, on the Discovery channel. It tells a dramatized version of events in the lives of people who are into the business of producing illegal moonshine in the areas including the Appalachian Mountains of Kentucky, North and South Carolina, Virginia, and Tennessee. For those unaware, moonshine is a slang used to describe the high-proof distilled spirits that are made illicitly without prior government authorization.

Over the course of nine seasons, ‘Moonshiners’ portrays the liquor producing efforts of the people involved in this racket while providing a peek into their lives and law evading techniques. Here’s everything we know about ‘Moonshiners’ Season 10.

‘Moonshiners’ season 9 released on November 19, 2019, on Discovery. It concluded with its 19th episode on May 9, 2020. The show, in spite of its modest ratings, has its own loyal fanbase. Hence, it has returned every year to Discovery’s winter line-up, following its debut in 2011. Therefore, we were always certain that the 10th edition would be commissioned soon enough. Well, as expected, the show was eventually renewed. Now, we also have a release date. ‘Moonshiners’ season 10 premieres on November 24, 2020, at 8 pm ET.

Moonshiners Season 10 Cast: Who Can be in it?

‘Moonshiners’ had started with Tim Smith and Steve Tickle, two partners out to make some liquor. The cast has now expanded to include the likes of “Digger” Manes, JT Smith, Mark Ramsey, Josh, Patti, David, Jeff, Mark, Lance, Chico, Bill, Jim Tom, Cutie Pie, Mike, Darlene, Wayne, Tyler, and Roy. Season 10 will continue to throw the limelight on most of the aforementioned stars — as they fight for their way of life while continuing to produce the local liquors.

What Can Moonshiners Season 10 be About?

Across the seasons, ‘Moonshiners’ has been concerned with showing in great detail how the makers of local liquor go about their business and evade the law at the same time. Although the moonshiners are almost masters of innovation in their own rights, their way of life is always under severe threat. With old-time legends in the business dying, it is up to the newer members to carry this way of life on their shoulders now. However, this is easier said than done since local liquor makers are facing stiff competition from big corporations who want to profit from this business as the popularity of ‘hand made’ spirits is intensifying.

‘Moonshiners’ takes a look into how all the surviving moonshiners are being forced to come together and join forces, setting aside their differences, in an attempt to fight for their way of life before it is lost forever. They had been branded ‘outlaws’ for generations and this unprecedented demand for the backwood spirits they produce, coupled with increasing pressure from law enforcement agencies is making it more difficult than ever for these master distillers to operate from the shadows, where they have grown most comfortable.

As the very culture of these people is on the line, the moonshiners are being forced to get creative, using secrets from previous masters of the trade. Facing the scenario where big corporations are trying to capture the market for ‘craft spirits’ while using cheap factory-made liquor, the moonshiners are resorting to resourceful frontier engineering and wily backwood antics, which will help them in keeping the techniques and traditional recipes of their artisanal heritage whiskey alive in their areas of operation.

Season 9 sees the once outlaw partners adjust to Tim going legal. However, the moonshiners first need to recapture the marker of craft liquors from big corporations who can easily encroach on this and sell at low prices since their alcohol is ultimately made cheaply in the factories. Season 10 is expected to continue highlighting the ongoing struggle of the moonshiners as they try to keep their business afloat in the tough market.