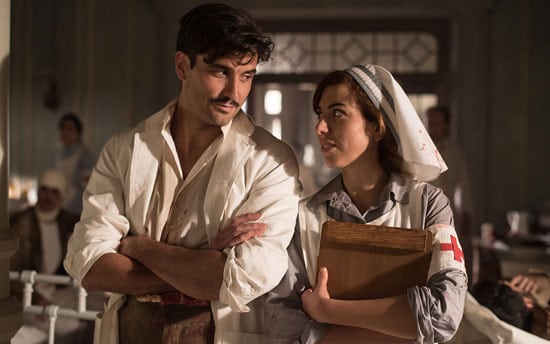 ‘Morocco: Love in Times of War’ (also known by its original Spanish title, ‘Tiempos de guerra’) is a Spanish war drama web television series that used to air on the Spanish channel Antena 3, and is now available on Netflix.

Set in the 1920s, the show follows a group of nurses from Madrid who are sent to Morocco to open a hospital and assist wounded troops during the Rif War, which lasted from 1920 to 1927. A relatively new show, Season 1 of ‘Morocco: Love in Times of War’ premiered on September 20, 2017 on Antena 3, and a year later, the show made its way to Netflix for international viewers, where it is available in both Spanish and English. Season 1 was met with a largely positive response from viewers, who are currently waiting for news on Season 2. Here’s everything we know about it.

Morocco: Love in Times of War Cast: Who is in it?

In the show, Amaia Salamanca plays the role of the main protagonist, Julia Ballester, who is not a trained nurse but joins the group headed to Morocco hoping to find her brother Pedro and her fiance Andres, who are played by Marcel Borras and Alex Gadea.

Alicia Borrachero, meanwhile, plays the role of the head nurse Carmen Angoloti, while José Sacristán plays the role of the head of the medical services for the army, Vicente Ruiz-Márquez. Other principal nursing roles in the show are taken up by Verónica Sánchez, Anna Moliner, and Alicia Rubio, who play the roles of Pilar, Magdalena, and Verónica, respectively. Further, other cast members who get significant screen time are Álex García as Fidel Calderón, Vicente Romero as Cte. Silva, Cristóbal Suárez as Luis Garcés, Silvia Alonso as Susana Márquez, Daniel Lundh as Larbi Al Hamza, Federico Pérez Rey as Tte. Med. Guillermo, Nuria Herrero as Raquel Fuentes, Toni Agustí as Somarriba, Miguel Rellán as Dámaso, and Carmen Balagué as Manuela.

If the show does get renewed for a second season, we expect most of these aforementioned cast members to make a comeback and reprise their roles.

Morocco: Love in Times of War Plot: What is it about?

The story centers around the Spanish city of Melilla in North Africa and the events in the story take place in the backdrop of the Rif War, which was fought between Spanish colonial forces and the Berber tribes of the Rif mountainous region. With the Riffian resistance piling up the pressure on Spanish forces, Morocco is left ravaged by the war, which leaves hundreds of Spanish soldiers dead.

In a bid to help the Spanish soldiers, Queen Victoria Eugenia agrees to send a group of nurses from the Spanish Red Cross to Melilla, so that they can set up a hospital to take care of wounded Spanish soldiers. The team of nurses, consisting of members of Madrid’s upper-class, is led by the Duchess of Victoria, Carmen Angoloti, who also serves as the head nurse of the hospital. Soon after the group arrive in Melilla and set up a hospital in an old school, they are put into action and exposed to the devastation of war. Their task is far from easy, and their job is complicated by the interventions of the Spanish Army. With casualties piling up, the nurses finally decide that more lives can be saved out on front, instead of waiting for the wounded to arrive at the hospital. Despite having no combat training, some of the nurses thus step out of the safety of the hospital and head to the front to provide on-spot treatment to those sustaining injuries in the war.

While this forms the basic premise of the show, quite a few of the female characters are extremely well-developed, and each of them has their own story-arcs. For instance, Julia, despite not being a trained nurse, heads to Melilla with the group to try and find her brother and her fiance in the chaos of the war. Others, like Magdalena and Pilar try and find love despite the depressing conditions of the war. Even the head nurse Carmen has her own battle to fight as she contends with her own illness and has to constantly deal with the interference of the Army in the hospital’s affairs.

If you’ve not guessed it by now, ‘Morocco: Love in Times of War’ does have a lot of soapy drama and romance. Yet, the strong performances by the cast members and the near constant emphasis on the devastation of war keeps the show from becoming just another romance drama set in the backdrop of war. Overall, it would be fair to say that ‘Morocco: Love in Times of War’ is a well-executed war drama that strikes a balance between portraying the harsh realities of war and delving into the lives of those involved. That being said, we would advise you watch the show in Spanish with English subtitles as the English dub of the show is rather corny.

As far as reception goes, we don’t know what television critics think of the show collectively, as it does not have a score on review aggregator website Rotten Tomatoes. However, viewers seem to have enjoyed the show, and it has a good rating of 7.8/10 on IMDb.

Morocco: Love in Times of War Season 2 Release Date: When will it premiere?

Season 1 of the show premiered on September 20, 2017 on Spanish channel Antena 3. Although quite some time has elapsed since the show made its way on Netflix, no announcement pertaining to the future of the show has been made.

While that sounds discouraging, it’d be wise to wait a bit before jumping to conclusions because Season 1 did end with a cliffhanger and Season 2 could very well be on the cards. If Netflix does renew the show, we would expect ‘Morocco: Love in Times of War’ season 2 to premiere sometime in 2020. We will update this section as soon as we hear more.

While we wait for Netflix to make a renewal (or cancellation) announcement, here’s the trailer for Season 1 to give you a glimpse into the show. If you haven’t seen the show yet head over to Netflix to catch all the episodes of the first season.