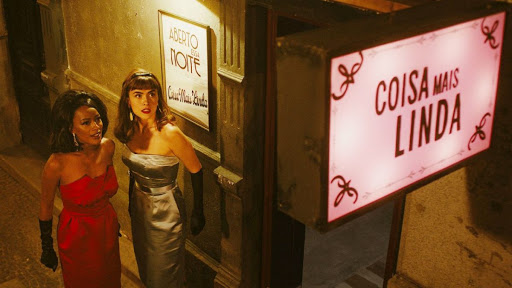 Netflix’s mission of being the provider of quality, international material has led to an exciting diversification of audio-visual content. Quality international productions not only transport viewers to exotic places, but to different periods as well (at times). This leads to increasingly refreshing stories that provide a more holistic understanding of the world at various time periods. ‘Most Beautiful Things’ is a Brazilian Netflix series that presents a visually appealing and vibrant peek at Brazil in the late 1950s and ’60s.

The result turns out to be an aesthetically appealing tale that is finely tuned to modern sensibilities. ‘Most Beautiful Things’ was later titled ‘Girls From Ipanema.’ However, the Portuguese-language series’ original title is ‘Coisa Mais Linda.’ The movie’s premise seems to take inspiration from the much-acclaimed ‘The Marvelous Ms. Maisel.‘ However, the Brazilian show just provides a nod to the Amazon Original.

‘Most Beautiful Things’ revolves around four women who attempt to live freer lives. However, the protagonist who takes center stage is Malu. She is depicted to be a wealthy woman who decides to open a restaurant with her husband. However, when her husband leaves her and flees with all the money, she is forced to make ends meet on her own. This stands in stark contrast to her conservative upbringing. In her journey, she befriends Adelia, Ligia, and Thereza.

The character of Malu is played by Maria Casadevall while that of Adelia is essayed by Pathy Dejesus. Fernanda Vasconcellos plays the character of Ligia while Mel Lisboa plays Thereza.

Where Was Girls From Ipanema Filmed?

‘Most Beautiful Things’ is set in Brazil in the late 1950s and the 1960s. The television series is mainly set in two Brazilian cities: Sao Paulo and Rio de Janeiro. Its period depiction proves to be on point as well as visually appealing. Hence, it is natural for viewers to wonder where the show is filmed. Has it actually been filmed in Brazil? Does some other place double up as the Brazilian cities?

According to local sources, ‘Coisa Mais Linda’ is actually filmed in Brazil. Most of the series has been shot in Rio de Janeiro. However, filming is also carried out in Sao Paulo. One source reported how several scenes were filmed in Rua XV de Santos. Unfortunately, apart from that, information regarding the specific filming locations of ‘Most Beautiful Things’ has been scarce. Have a look at some behind-the-scenes photos shared by the actresses of ‘Most Beautiful Things:’