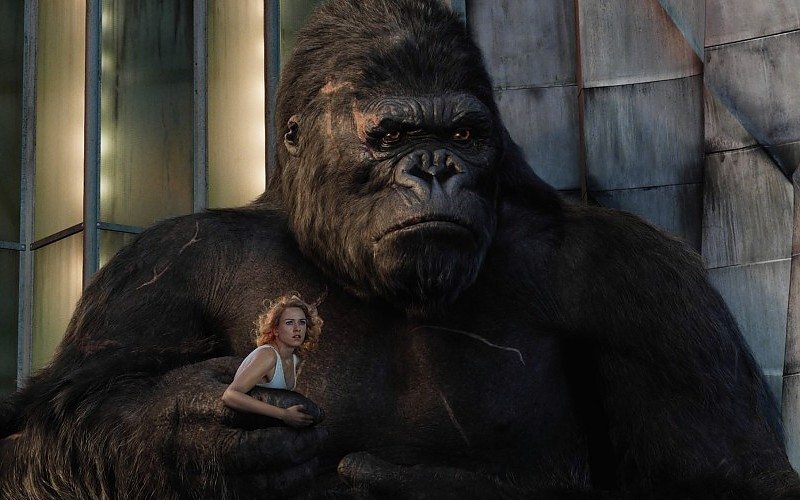 With ‘Kong: Skull Island’ coming to us very soon, I went back and re-visited Peter Jackson’s magnificent remake of King Kong (2005).

In 2005, I saw one better film than the remake of King Kong (2005) and that was Brokeback Mountain (2005). Peter Jackson had tried to remake King Kong in 1996 before his success and Academy Awards for his sublime ‘The Lord of the Rings trilogy’, but he was not known enough to trust with such a project and Universal declined. Just under ten years later armed with seventeen Academy Awards for the trilogy including a Best Director Oscar, a DGA, and countless other awards for his films he marched back into Universal and they handed him the funds to make the film, no questions asked
The original 1933 film had been remade once before, dreadfully in 1976 with poor Jessica Lange, a future Oscar winner forced to climb in and out of a massive mechanical hand. Kong was a guy in a monkey suit who neither moved nor walked like a gorilla, it was ridiculous but made a fortune.

This was a very different remake, as it was made out of pure love for the original film. Jackson saw the chance to bring the story to an entire new generation of film goers, saw he could do things with the visual effects they could not do in 1933, and wanted to make it bigger, richer, and fuller. To him the 1976 remake, with Jessica Lange, did not exist. His script was much more dense, deeper, and the characters fuller. There was more emphasis on the love story between Kong and Anne Darrow, it was clear from the beginning the moment the beast saw the beauty he would not harm her and would in fact die protecting her.

The film begins in New York of the Depression, where hotshot movie maker Carl Denham (Jack Black) is trying to convince his backers to fund some more shooting. His plan is to scam them and go to a place he has heard about and obtained a map for called Skull Island. It all goes wrong for him and he is forced to flee, but not before grabbing a young woman who fits the costumes, to come with him, Anne Darrow (Naomi Watts) and holding a playwright long enough to keep him along for the ride. The playwright, Jack (Adrien Brody) and Anne will of course fall in love.

When they find the island, the natives kidnap Anne and offer her to their God, Kong, a gigantic gorilla. It seems time has stopped on the island and dinosaurs roam freely, very much the enemy of the gorilla. He takes Anne into the jungle with him, and goes to war with any creature who tries to take her away from him. Only Denham has seen the beast, and at once starts formulating how to get him back to America.

The men pursue Kong into the jungle in hopes of saving Anne and on the way, like Kong encounter dinosaurs who see them as food and attack. At one point Kong battles not one but three T Rex who are intent on killing he and Anne, but the mighty ape prevails. When the men are shaken off a log to horrible deaths by the ape, Jack finds himself alone in finding Anne, and goes on leaving Denham to go back to the ship.

Jack does indeed find Anne and rescues her, only to see Denham plans to take Kong back to America as a sideshow. They gas the poor beast and he is taken in chains back to the States. Anne and Jack will have nothing to do with Denham’s show, and wander aimlessly looking for love again, having grown apart. Kong escapes the show and tears the theater apart, and begins his rampage on New York until he finds Anne. They have a lyrical, idyllic time on a frozen pond before the army finds them, Kong laughing as he slides across the ice, which he has never seen before.

The final encounter atop the Empire State Building takes place in the morning, and is stunning to behold. As they watch Kong’s final sunrise they remember the one on the island, and gaze at one another before the planes come and shoot him to pieces, causing that long horrible fall. It was beauty who killed the beast indeed.Jackson directed a full blown epic here, a knockout of a film that earned rave reviews from the critics, topped more than one ten best list but under performed at the box office.

That said it was a magnificent film, three hours of stunning filmmaking, and when Kong shows up, it becomes a rip roaring adventure film unlike anything we had ever seen before. So many great moments, the first appearance of Kong, the battle with three T-rex, the escape of Jack and Ann through the jungle with Kong in pursuit, the gassing of the great ape, his unveiling in New York and escape as he destroys the theatre, the ice pond and that final extraordinary sequence high above the city at dawn as the planes buzz at him like giant mosquitoes.

Naomi Watts was Oscar worthy as Ann, bringing a cocky but of fun to the role, and a fearlessness that was not there with Fay Wray. Jack Black was terrific, Adrien Brody and Kyle Chandler both did very well, and Colin Hanks equally good, but it was Kong who stole the film. Andy Serkis once again portrayed a motion capture character and was superb, bringing a humanity to the great ape that was heartbreaking. The film won three Academy Awards, for visual effects, sound and sound editing and should have had several more nominations, Best Picture, Actress and Director among them…this was a masterpiece in every way.