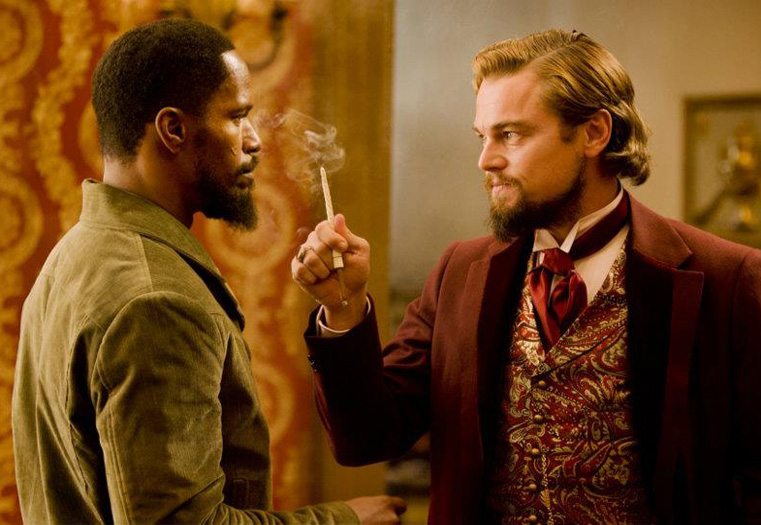 While I may not be a huge fan of Quentin Tarantino, I can’t help but be amazed by the parallel world he creates in his films. A world that could be derived out of the pages of history, but is turned and magnified into an alternate universe of surrealism. Django Unchained could very well be in the cusp of that chaotic and hysterical universe, but at the same time, it doesn’t hold back in unflinchingly telling the tale of horrors and futility of slavery in a spaghetti western style but with a Tarantino stamp on it. A film that’s funny but tragic, romantic but repulsive, violent but musical, gruesome but entertaining; all at the same time. For all its glorious contradictions, it is unfathomable and even unimaginable that any other director could have helmed this film or even attempted to do so.

‘Django Unchained’, on the face of it, might seem to be a heroic tale of revenge but actually it’s a romantic saga at heart. It begins with a German bounty hunter, also a dentist, Dr. King Schultz (Christopher Waltz) looking for a slave Django (Jamie Foxx) who could help him find his bounty. Schlutz not only frees Django from the clutches of slavery but also trains him to become a bounty hunter. Using this lease of life, newfound power, and with the help of his mentor Schultz, he tracks down captivator of his wife Broomhilda (Kerry Washington), a charming plantation owner named Calvin Candie (Leonardo Di Caprio). Faced with a ruthless villain, a cunning housekeeper Stephen (Sameul Jackson), and precarious situation of his wife, will Django be able to succeed in his gargantuan plans, is the story of the film.

‘Django Unchained’ is unpretentious in its intentions right from start, and plays throughout as a unflinchingly gruesome tale of revenge with plenty of bloodshed and bullets. But at the same time, it’s unapologetically funny, where even in the most violent scenes you might find yourself laughing. And that’s where the strength of the film lies. In spite of handling a heavy subject matter like slavery, ‘Django Unchained’ never becomes a social commentary, and it carries on with its tense but humorously handled story-telling. Though, for me, it’s the extraordinary and uplifting musical score of the film that transforms the whole watching experience into a rock show. Not since Pulp Fiction, music has played such an important part in any of the Tarantino’s films. At 2 hours and 45 minutes, the film might feel tad tiresome especially towards end, but for most part of it, you will remained gripped in its narrative. And yes, can someone request Mr. Tarantino to stop making embarrassing cameos in his own films.

‘Django Unchained’ has four brilliant performances, and to single out the best out of them would be doing injustice to the other three. Foxx brings an unbridled tenacious resolute to Django with his stoic portrayal of a slave on mission. Brimming with charm, chutzpah and humor, Waltz plays Dr. Schultz in a supremely crafted performance. Leonardo Di Caprio in his first full-fledged negative role holds the screen like no other. The sheer spitefulness that you generate for his character is the testimony of Leo’s  calibre in playing a loathsome and ruthless Calvin Candie. Last but not the least, is Tarantino’s old horse Samuel L. Jackson who steals away the scenes he is in, with his portrayal of unintentionally funny but wicked housekeeper.

To sum up, ‘Django Unchained’ is your cup of tea if you like to drink anything with Tarantino written over it. But even if you don’t hold him in high esteem, it will still entertain you. For people who can’t see blood or torture onscreen, I would simply say – avoid, because in Tarantino’s world, blood is cheaper than water.