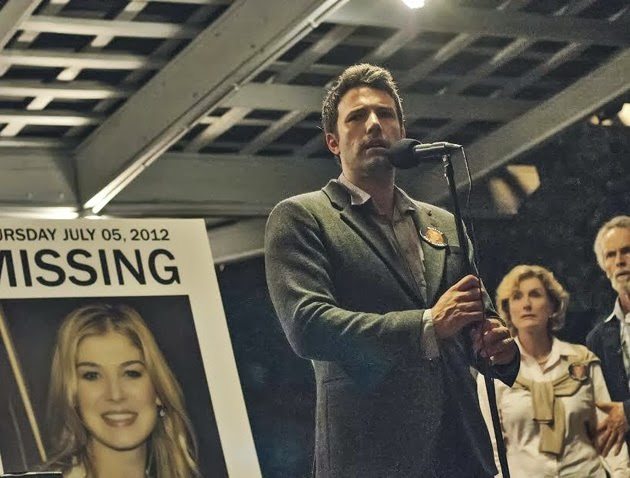 David Fincher, in a career spanning more than two decades, has yet to make a bad film. His favorite genre, if there’s one, has got to be thriller. Though, the most wonderful aspect about his film-making is that his subjects or matters of interest are different with every film, even if, the style quite similar — a hallmark of great director. One might argue that he has made quite a few films on psychopath killers (Seven, Zodiac, The Girl with Dragon Tattoo), but on close observation you will realize his films are not about killers per se, but rather the characteristics and behavior they exhibit. And in the process he tries to tackle something more elemental that everyone can connect with. In the same vein, even though Gone Girl arguably is about a (suspected) killer, Fincher’s interest is not as much as in the killing as everything around it.

An anatomy of two Ms: Marriage and Media, Gone Girl is a piece of work that speaks volumes about the current state of society we live in, where every marriage is expected to be — many a time pretended to be — perfect, and every out-of-ordinary event is a perfect bait for media hyperbole.  Riddled with dark humor, Gone Girl mocks the denigrated state of media, and the manner in which they manipulate beliefs, and the rush they are in to pass on judgement. The film also brings up the harsh realities of courtship and marriage: During courtship phase, one tends to show only most attractive aspect of oneself to partners, but after marriage, eventually, that mask comes off, and one finds out who he/she is really with. Therefore, I believe that even if on the face of it Gone Girl appears to be a tale of secrets, actually it’s a tale of trust: How much trust do you have in marriage, and more importantly how much do you know your partner.

Gone Girl begins when on the occasion of his fifth wedding anniversary, Nick Dunne (Ben Affleck) reports that his wife, Amy (Rosamund Pike), has gone missing. Under pressure from the police and a growing media frenzy, Nick’s portrait of a blissful union begins to crumble. Did Nick kill his wife ? And if not, why is Amy missing ? And what are the secrets that characters of the film are withholding ? You will find yourself asking these questions as the film proceeds, though, it gets crazier and messier as you approach the end. I won’t say Gone Girl is a nail-biting or edge-of-the-seat thriller in the veins of Zodiac or Seven, but it will keep you engrossed as your loyalties will shift from one character to another. And there in lies the beauty of Gone Girl. There’re no heroes in the film. There are only characters with shades of gray. Characters, who you will find difficult to trust, just the way they find difficult to trust each other. There are also moments that might make you gasp, especially the one in the third act, which is also where the film looses the realism that it has so diligently managed to build till then. From then on, you are not as invested in the characters as you were at the beginning of the film.

Adapted from the novel of the same name, Gone Girl punches above the weight of what’s on paper. With some starkly memorable visuals, haunting score, and a perfect casting, Fincher manages to create something that will linger in your memory long after the credits have rolled. Fincher has always been a sensory director who likes to have a strong visual style, which is quite obvious in the mood that cinematography — and even score — lends to the film. And equally strong are performances from all the actors in the film. This is easily Ben Affleck’s career best work. When you see Affleck playing Nick, you can’t think of anyone who could have played it better. Having himself been a target of media many a times, he knows his character well enough. Playing the female lead, Rosamund Pike is truly a revelation. It helps that she has such piercing, beautiful eyes perfect for playing Amy. Her career will surely receive a big boost after this. Not to forget the Oscar nomination that she’s more or less lock for.

Overall, even if Gone Girl may not reach the insurmountable heights of some of his previous films, it still reeks with Fincher’s talent and motive. It’s a film that will give rise to many debates inside households, and outside.