12 Movies You Must Watch if You Love ‘Blue Crush’ 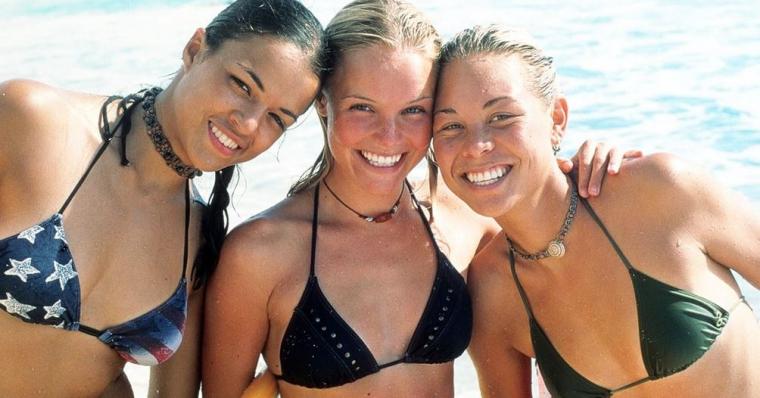 Blue Crush is a story of teen spirit, inspiration, motivation, and much more. One of the best ones of Kate Bosworth, the movie shows the life journey of a teenage girl who has a natural talent for surfing and wants to be popular in the sport. However, there are several hurdles in her way including a small sister that she has to take care of, a housekeeping job that doesn’t pay much, and a rich guy who gets into her pants quicker than you can say the word ‘jiffy.’

The perseverance and the hard work she portrays to reach the peak of her skills is something to learn from. If you’re fresh out of movies to watch and are searching for films like this ocean gem, venture no more. Here is a list of movies similar to ‘Blue Crush’ that are our recommendations. You can several of these movies like Blue Crush on Netflix, Hulu or Amazon.

Steve Addington (Matthew McConaughey) is a young surfer who has drifted to the dark end of the pool. He’s into drugs, is stoned half the time, surfs the other half, and lives off the sponsor’s money. Somewhere along the line, his sponsor forces him to pose and act for a surfing video game which goes against his shallow principles of only surfing and doing nothing else. Additionally, he falls in love with a local girl Danni, who doesn’t like him one bit. Amidst all the turbulence, the Pacific suddenly drops, and there are no waves for over a month. With no surfing to clear his mind, Steve goes into an existential crisis. Will the star surfer be able to remember why he loves surfing in the first place or will he become one of those one-hit wonders?

The ocean is not all serene and beautiful. In this slasher thriller, see as a handful of tourists who are on a perfect holiday to Brazil, find themselves trapped in a wicked conspiracy. Surrounded by organ smugglers, they are captured and killed one by one to harvest their body parts selling them to the highest bidder. Will they survive the agony of the ocean and its inhabitants or will they perish as has every Turista who came before them?

Rick Kane (Matt Adler) is a teenager fresh out of high-school and full of adrenaline. After he wins a local pool surfing competition, he uses the winnings to fly out to Hawai and do some real surfing before the summer gets over. Real ambitious huh? However, after he gets there, he realizes it takes more than sheer luck to be a surfing expert. Things get worse when Rick gets robbed by the local surfing gangs for interfering in their matters. He ends up on the door of Chandler (Gregory Harrison) -a soul surfer and local legend- who takes pity and teaches him how to surf. Slowly and steadily Rick learns how to eyeball the big waves and at the same time catches the eye of a local beauty. How will the story of a supposed soul surfer end?

The only skating school-nerd Casey has done is in the big stacks of books she reads every day. However, when she gets the opportunity of a lifetime to train with a former figure skater and compete in the most challenging event of her life, little Casey must grow up and face the music. However with the music also comes the evil beat of her coach’s past. Will her coach prefer Casey over her own daughter or disappoint her just like she has done with everybody else in her life?

Dana (Sasha Jackson) is 18, rich, gorgeous and, a killer surfer. With the memory of her mother held close to heart, she gives her all whenever she ventures out into the open sea. When her father is away on a business trip, Dana runs away from her home in Beverly Hills and ends up in Jeffreys Bay, the mecca of surfing. Deciding to honor her mother’s memory and write her own bildungsroman, she roams around J Bay with her friends, searching for the perfect barrel in which she can surf to the peace she longs for.

Finn (Matthew McConaughey) is a part-time treasure hunter and full-time mad. He has no money and has been recently divorced from his beautiful wife, Tess (Kate Hudson). When he gets an opportunity to dupe a multi-millionaire and his dumb daughter into following him to the ends of the sea to search a lost Spanish treasure, he doesn’t even blink. Along with pirates on their trail, the treasure hunter and his estranged wife must find the treasure before they are killed in action.