9 Movies You Must Watch if You Love Crouching Tiger, Hidden Dragon

Ang Lee is often considered as a modern-day auteur. The director has continuously proven his range of storytelling with films such as the romantic comedy ‘The Wedding Banquet’ (1993), the romantic drama ‘Brokeback Mountain’ (2005) and the survival drama ‘Life of Pi’ (2012), to name a few.

The filmmaker proved his capabilities with his wuxia film ‘Crouching Tiger, Hidden Dragon’ (2000). The movie follows a young Chinese warrior who steals a sword from a famed swordsman. He then escapes with a mysterious man crossing the borders of the kingdom. Adapted from the novel of the same name, written by Chinese novelist Wang Dulu, ‘Crouching Tiger, Hidden Dragon’ is brought on to the big screen by co-writers Wang Hui-ling, James Schamus and Tsai Kuo Jung, shot by Hong Kong cinematographer Peter Pau, edited by American film editor Tim Squyres, and the music is scored by composer Tan Dun.

The action sequences are choreographed with dexterity, which is complemented by the visually gorgeous cinematography. The peripheral aesthetics are further structured qualitatively by the performances. In addition, the narrative builds on the stylistics with a deeply contemplative socio-political commentary. From the gender politics of the Qing dynasty to the concept of a mentor-student relationship, ‘Crouching Tiger, Hidden Dragon’ teems with inspiration.

The film, upon its release, received humongous praise for cinematic splendor. With over forty award nomination, consisting of ten Academy Award nominations and multiple Golden Globe and BAFTA wins. ‘Crouching Tiger, Hidden Dragon’ is a cultural classic. It is an important piece of work in the realm of cinema.

For this list, I have taken into account films which have a similar narrative structure. The selected names on this list are primarily of the wuxia genre. In addition, I have not included projects directed by Ang Lee in order to have a more diverse selection. So, without further ado, here is the list of best movies similar to ‘Crouching Tiger, Hidden Dragon’ that are our recommendations. You can watch several of these movies like ‘Crouching Tiger, Hidden Dragon’ on Netflix, Hulu or Amazon Prime.

Loosely adapted from ‘The Legend of the Condor Heroes,’ written by Jin Yong as part of his ‘Condor’ trilogy, ‘Ashes of Time’ stars Leslie Cheung as Ouyang Feng, a heartbroken hitman who moves to the desert where he employs several skilled swordsmen in order  to carry out his contract killings. Written and directed Wong Kar-wai, ‘Ashes of Time’ is built upon strong performances and visually appealing cinematography by Austrian-Hong Kong cinematographer Christopher Doyle. The renowned battle sequences are choreographed with dexterity. 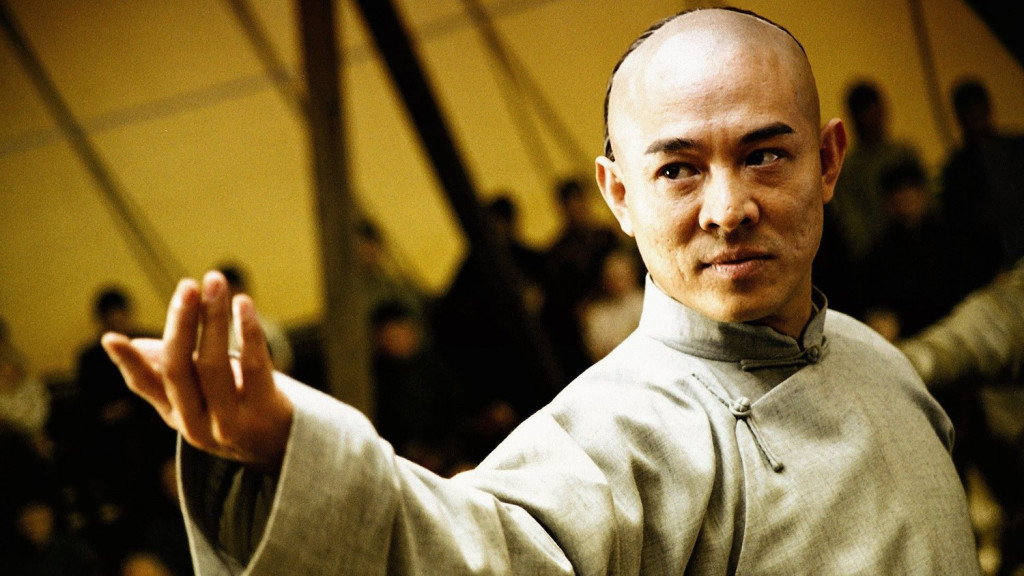 A Ronny Yu directorial, ‘Fearless’ is the biographical tale of Master Huo Yuanjia, a Chinese Martial Artist, and follows his life as the founder as well as the spiritual guru of the Jin Wu Sports Federation. Starring Jet Li as Yuanjia, the film is an engaging and engrossing voice of socio-political commentary.

Co-written by Chris Chow, Christine To, Wang Bin, and Li Feng, ‘Fearless’ explores the burning issues of nationalism in China, the Western imperialism and slow and gradual fall of the Qing Dynasty with birth of the Republic of China in the offing. While the movie faced the tantrums of controversies, the cinematography and the performances helped it score big at the box office. 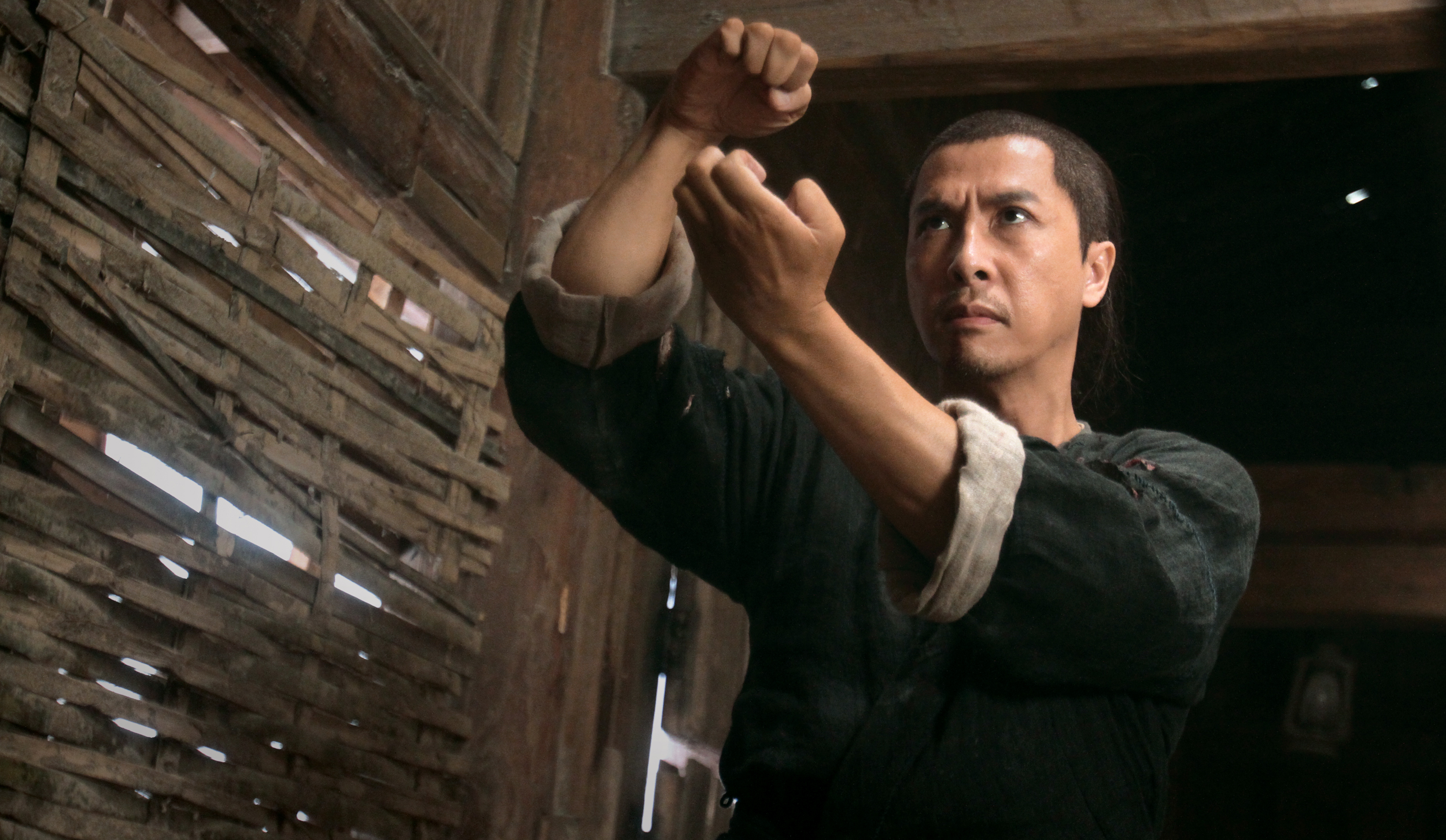 Written by Aubrey Lam and directed by Peter Chan, ‘Dragon’ is the story of a paper maker who becomes embroiled in a murder case which also involves two criminals. With the case led by a detective, the paper maker finds himself at the barrel of prime suspicion. While the movie is constructed as a martial arts film, it is a thriller by the narrative.

The screenplay paves the way for the direction to structure a seat clenching roller-coaster ride. Film critic Maggie Lee of The Hollywood Reporter praised the stylistics, writing, “Dragon is an exhilarating martial arts entertainment that modernizes the genre while re-emphasizing its strong points.” The movie also scores point in the performances, with the actors receiving three Hong Kong Film Award nominations, to name a few. 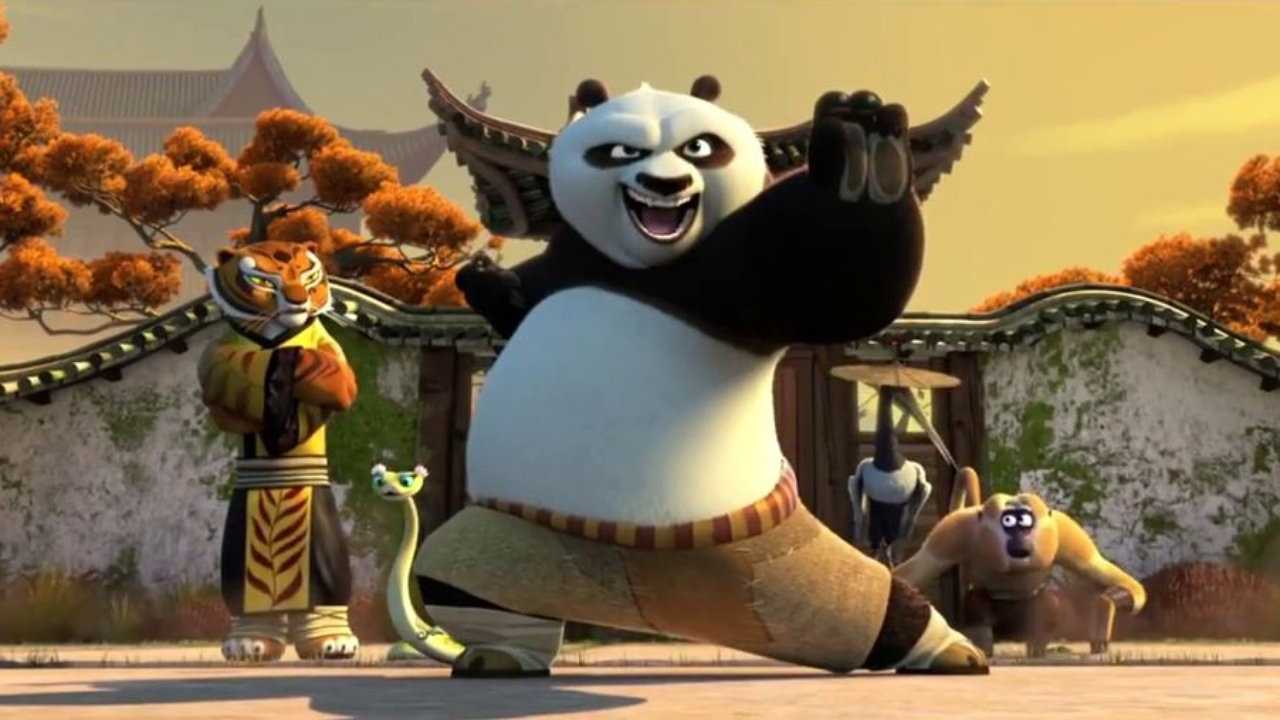 An animated wuxia film, ‘Kung Fu Panda’ is co-directed by John Stevenson and Mark Osborne and co-written by Jonathan Aibel and Glenn Berger. The movie is set in ancient China where a warrior named Tai Lung employs villainous ways to terrorize the community and hold them at his mercy. However, the warrior clan try to act upon the myth of “The Dragon Warrior” who, according to the prophecy, will rise up to defeat the tyrannical Tai Lung. However, the problem is that mantle of the Dragon Warrior is mistakenly bestowed upon an obese panda who has no skills in martial arts!

The movie is brilliantly designed, with the action set pieces creating a flair only an animated movie can manage to do. In addition, voice actors perfectly capture the character vibes. The music, composed by Hans Zimmer and John Powell, provide the emotional arc to a captivating story. ‘Kung Fu Panda’ premiered at the Cannes Film Festival and received positive reviews. The movie also won big bucks at the box office, grossing $631.7 million against a budget of $130 million. 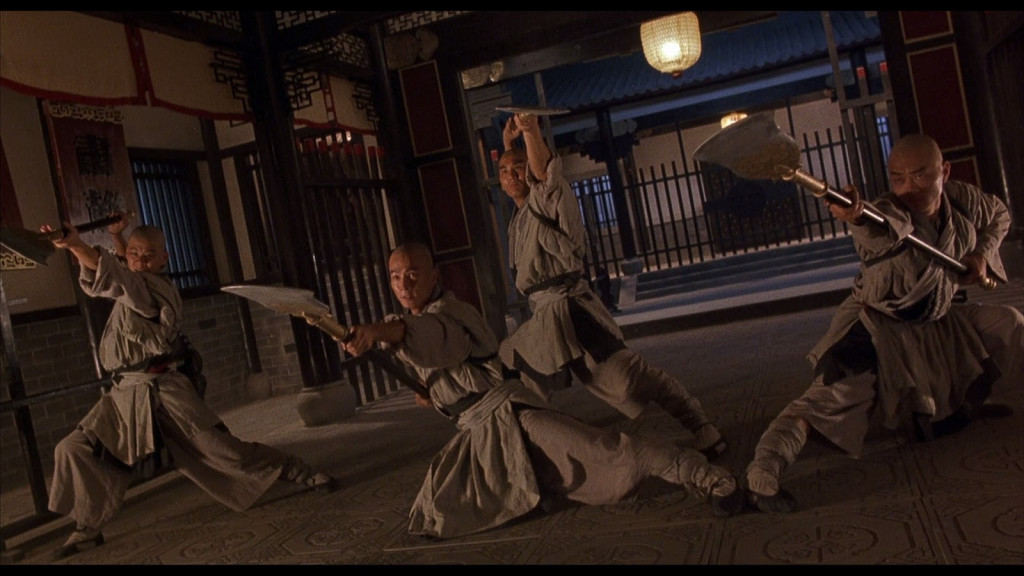 Directed by Yuen Woo-ping, ‘Iron Monkey’ chronicles the folklore of the titular “Iron Monkey,” as encountered by Wong Fei-hung and his father Wong Kei-ying. The narrative, co-written Tsui Hark, Cheung Tan, Tang Elsa, and Lau Tai-Mok, is deep rooted is mythology which is foiled by gorgeous action choreography. The movie stars Donnie Yen as Wong Kei-ying, Yu Rongguang as Yang Tianchun and Angie Tsang as Wong Fei-hung, who perfectly capture the essence of the story. ‘Iron Monkey,’ upon its release, received positive reviews for the political commentary and the musical score, composed by Richard Yuen. 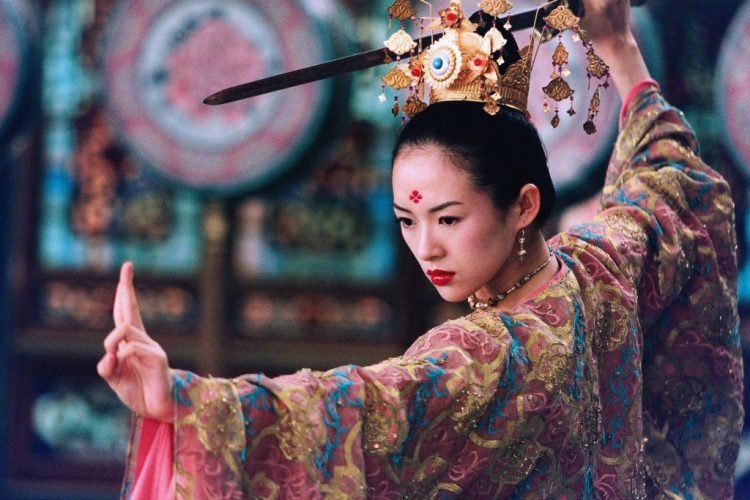 Designed as a romantic wuxia film, ‘House of Flying Daggers’ stars Andy Lau as Captain Leo, a policeman who helps Mei, a member of a rebel gang with whom he is in love with. Mei breaks out of prison and is on the run to rejoin her fellows. While things seem to be merry, circumstances arise which question his decision of saving the love of his life from the prison at the cost of his job and reputation.

What makes the movie such an engaging watch is the romantic angle attached to the primary genre, which is quite inventive in itself. Directed by Zhang Yimou and co-written by Li Feng, Peter Wu, Wang Bin, and Yimou, ‘House of Flying Daggers’ won rave critical reviews. While the narrative, performances and direction are splendid, the movie is really charged by the beautiful and exquisite cinematography by Zhao Xiaoding. With a twenty-minute standing ovation at the Cannes Film Festival premiere, ‘House of Flying Daggers’ is a brilliant piece of work. 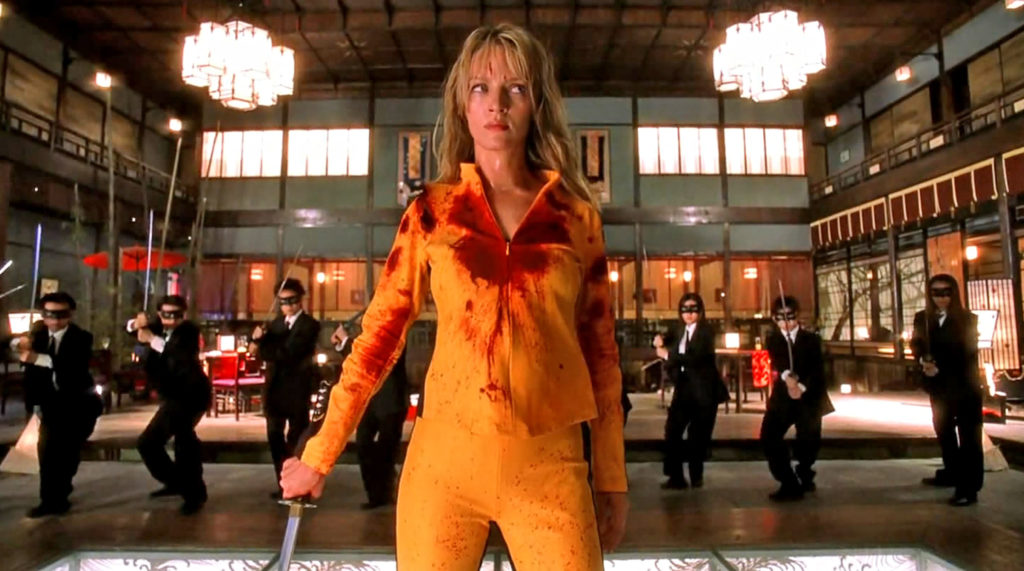 The ultimate homage to the wuxia genre, ‘Kill Bill: Volume I and II’ follows Uma Thurman’s character, the Bride, as she goes on a rampage of blood-soaked revenge from the titular Bill, who along with his team of assassins try to kill her and her unborn child. With bloodshed and grotesqueness, ‘Kill Bill’ can be easily disparaged to be cheap gore.

However, with adrenaline-pumping action sequences, snappy dialogue and engaging performances, ‘Kill Bill’ is an amazing watch. While the two volumes released in consecutive years – 2003 and 2004 – director Quentin Tarantino considers them as one film, which is a saga of revenge. The critical response was complemented by the love of the audience, as it grossed $180.9 million against a budget of $30 million. 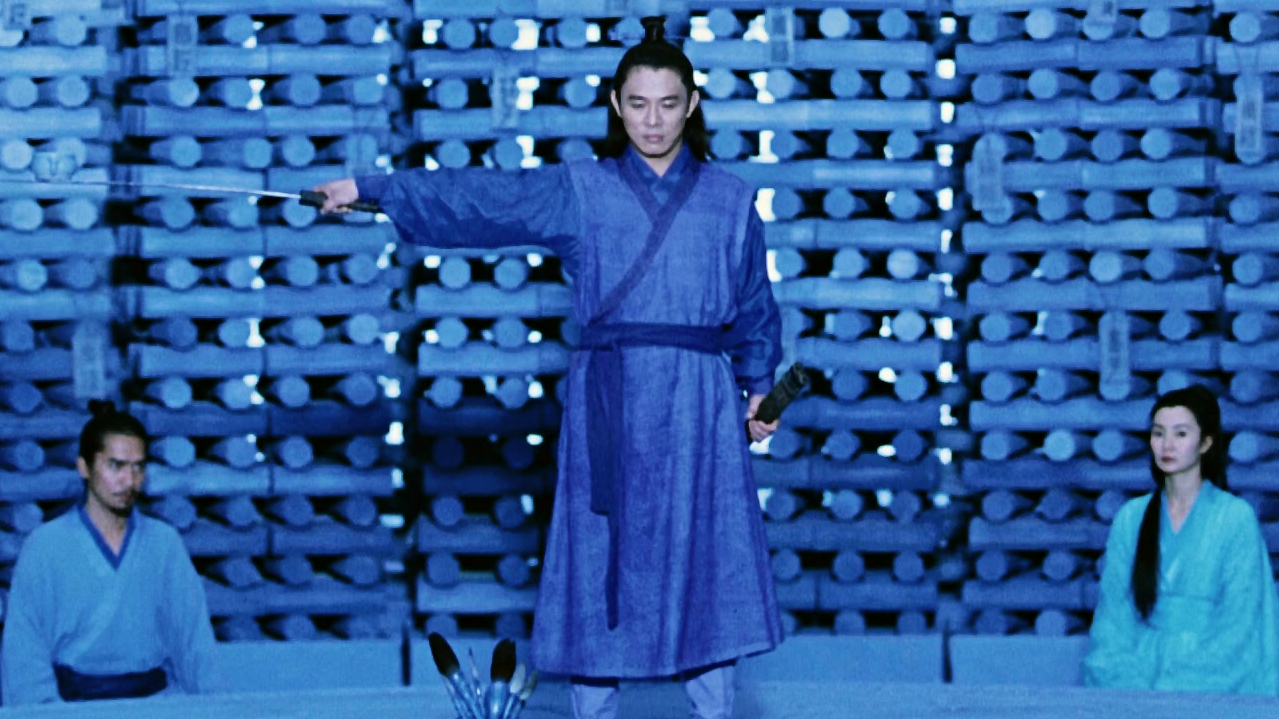 Directed by Zhang Yimou and co-written by Feng Li, Bin Wang and Zhang Yimou, ‘Hero’ chronicles the case of the assassination attempt on the King of Qin orchestrated by Jing Ke in 227 BC. The film stars martial arts icon Jet Li as the protagonist who is nameless and is enmeshed within the conspiracy of the assassination. With a 95% rating on Rotten Tomatoes, ‘Hero’ is one of the wuxia films which made a big name in Hollywood, which is credited to Quentin Tarantino’s continuous push on the marketing side.

The movie went on the becomes a critical favorite with positive reviews pouring down from prominent critics. Roger Ebert praised the narrative, writing “beautiful and beguiling, a martial arts extravaganza defining the styles and lives of its fighters within Chinese tradition” While the action sequences provide fodder for the adrenaline, the underlying socio-political commentary elevates the film as a deeply contemplative piece of work.

A Taiwanese film, ‘Dragon Inn’ (1967) is written and directed by King Hu. Set in 1457 China, when the children of an outcast army General are pursued by the law, a group of heroic martial arts swordsmen come to their rescue. ‘Dragon Inn’ is one of the hallmark works in the wuxia genre, which went on to inspire other movies. With a cohesive screenplay and brilliant direction, the flick is an amazing watch.  The success of ‘Dragon Inn’ spawned two remakes, titled ‘New Dragon Gate Inn’ (1992) which is directed by Raymond Lee and ‘The Flying Swords of Dragon Gate’ (2011) from director Tsui Hark, both of which were received positively by critics and audiences alike.