7 Movies You Must Watch if You Love Hercules

Since Dwayne Johnson rose to popularity in the WWE as ‘The Rock’, it became pretty evident that he is a charismatic performer who excels both in action and in trash-talking with his opponents. No other WWE wrestler has ever looked as convincing in portraying the character he plays as Dwyane Johnson. Thus, it was not at all a surprise when he managed to win over audiences as soon as he stepped into Hollywood. Since his first role as the Scorpion King in ‘The Mummy Returns’ (2001), Johnson has built up his reputation of being Hollywood’s hottest action superstar following the same path trodden by the likes of Arnold Schwarzenegger and Sylvester Stallone. Johnson is now one of the highest-paid actors in the business and one of the highest-grossing actors ever.

His 2014 venture ‘Hercules’ was a testament to the fact that he can do wonders with larger-than-life characters, with his massive build doing justice to the several myths surrounding this great warrior. The story of the film follows Hercules as he starts off as a mercenary-for-hire, who is approached by King Cotys to train his army so that they can protect themselves from a vicious warlord. Hercules agrees to the proposal, and even leads Cotys’ army to battle, only to later realize he has been fighting on the wrong side all along.

The film stands out with its extensively choreographed war scenes and for Johnson’s lively presence which keeps us glued to the screen. No other actor working today would have managed to pull off this role as brilliantly as him. If you are a fan of the film and are looking for more similar flicks, then you have come to the right place. Here’s the list of best movies similar to ‘Hercules’ that are our recommendations. You can watch several of these movies like ‘Hercules’ on Netflix, Hulu or Amazon Prime. 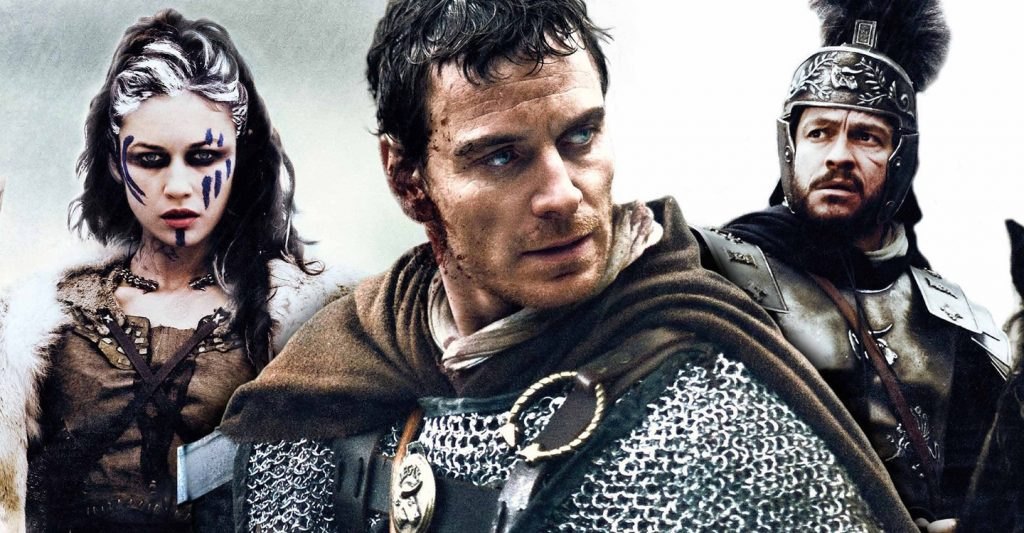 British director Neil Marshall is a popular name among horror film fans, having made the 2002 horror-comedy film ‘Dog Soldiers’ which gained a cult following soon after its release. His 2005 venture, ‘The Descent’, was also able to win over critics and audiences alike. Thus, when Marshall announced his stepping into the world of costumed historical–action movies with ‘Centurion’, audiences were waiting with anticipation to watch his vision unfold.

The film, set during the Roman occupation of Britain, centers around a group of Roman soldiers who try to hold on to their lives after a guerrilla attack severely weakens their army. Michael Fassbender stars in the film as Quintus Dias, a Roman centurion who manages to survive the guerrilla attack and heads northwards to rejoin the Roman army and take the fight to the Picts who attacked them in the first place. Watch this movie for its action sequences – they are bloody, gory, and, unfortunately, the only good thing about the movie. Character development here is pretty weak, and is probably the reason the film failed to click with the audiences. 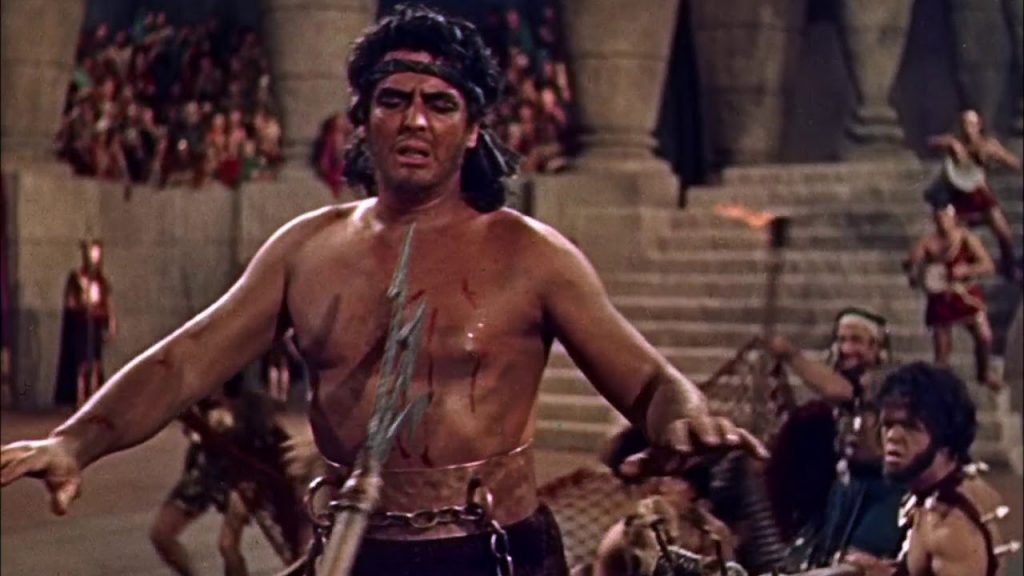 Cecil B. DeMille is the founding father of American cinema. No other film industry in the world has managed to make movies on such a grand scale like Hollywood, and DeMille is the person responsible for giving Hollywood this prototype they live by to this very day. His 1949 venture ‘Samson And Delilah’ is probably his best and most admired work. Considering the fact that both Hercules and Samson are regarded as among the strongest men in myth and folk, ‘Samson And Delilah”s entry on this list was rather inevitable. Samson, (played by Victor Mature) however, is not the central character of the film. That honor goes to Delilah (Hedy Lamarr). She’s the sister of Semadar, a woman who falls victim to Samson’s rage during their wedding.

The film follows Delilah on her quest to bring about Samson’s demise by seducing him and extracting information about the source of his strength. ‘Samson And Delilah’ is now itself a part of Hollywood folklore. The grand scale of production, the beautifully crafted costumes, the brilliant cinematography of George Barnes give this film an appeal unparalleled by other films of its time. 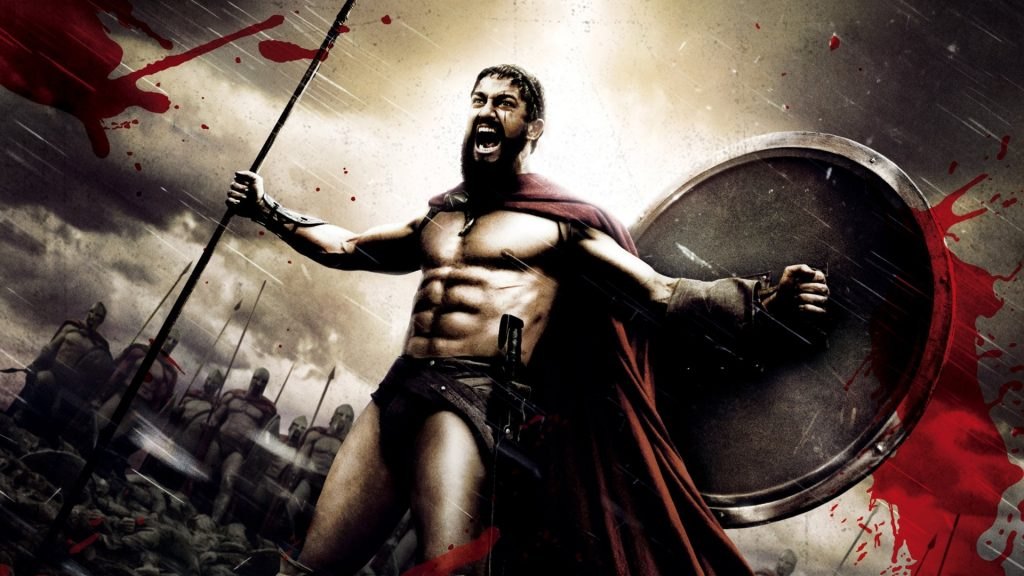 Zack Snyder might have failed the world with ‘Batman vs. Superman: Dawn Of Justice’ (2016) and ‘Justice League‘ (2017), but films like ‘300’ (2006) and ‘Watchmen’ (2009) are proof of his directorial prowess. It is ‘300’ which made Snyder a household name, for never had we seen such a stylized historical war film where the aesthetics of the filmmaking sometimes transcends the story itself.

‘300’ is the story of the Battle of Thermopylae, which was one of the most important battles in the Greco-Persian Wars. The central character of ‘300’ is King Leonidas, the Spartan warrior-king who leads an army of 300 Spartan warriors to face off the huge Persian army led by Xerxes. They have no chance of winning, but it is their sheer indomitable courage which keeps us rooting for Leonidas and his man. Frank Miller and Lynn Varley’s comic book series is the inspiration behind the film and Snyder does keep the imagery used in the comics in his version, giving it an appearance we’ve never seen in movies made in this genre. ‘300’ has courted some controversies over its depiction of Xerxes, but it has received much louder acclaim from audiences all over. 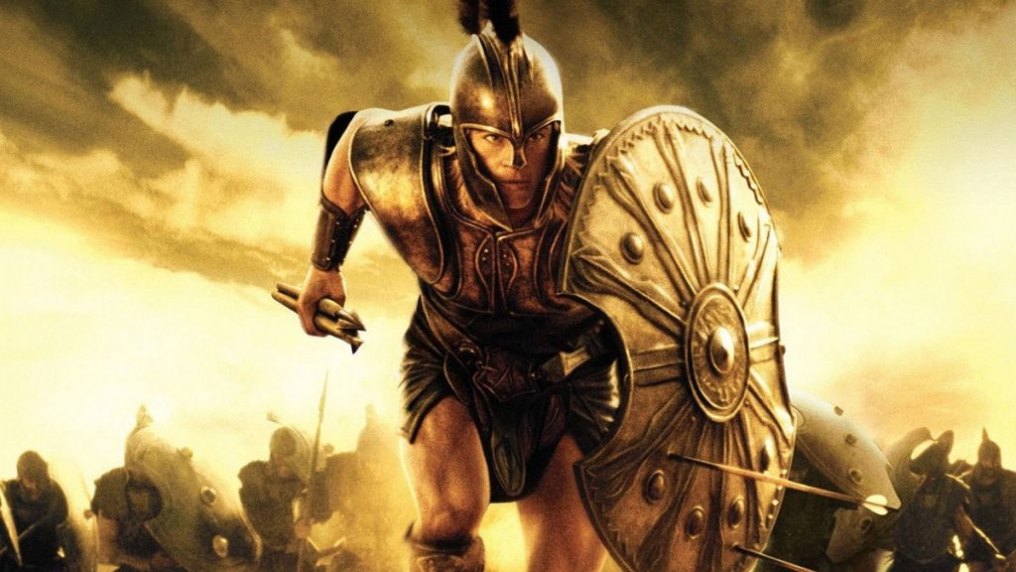 Hercules and Achilles are legendary warriors whose fame crossed their mythical realms and have now entered our daily conversations, synonymous with acts of courage and strength. It is no surprise that the mention of ‘Troy’ would pop up on this list, as no other film has managed to capture the enigma of Achilles as beautifully as this Wolfgang Petersen directorial. The film is a retelling of the Greek epic ‘Iliad’ by Homer. The story centers around the war between the Greeks and Trojans after the Trojan prince Paris runs away with King Agamemnon’s wife Helen during a state visit. And who leads the Greek army against the Trojans? Achilles — the greatest warrior the kingdom of Greece has known.

It is the performances and the battles in the film which stand out more than anything else. As the story itself is quite popular, it was important to focus on these other aspects to get people talking about the movie. The fight sequence between Achilles and Hector (Eric Bana) is one of the greatest one-on-one fight scenes you will ever see in American cinema. Brad Pitt delivers one of his best performances ever as Achilles; his charisma and commanding screen presence standing tall among the film’s other illustrious cast members. Orlando Bloom, Diane Kruger, Brian Cox, and Peter O’Toole play other important characters in the film. 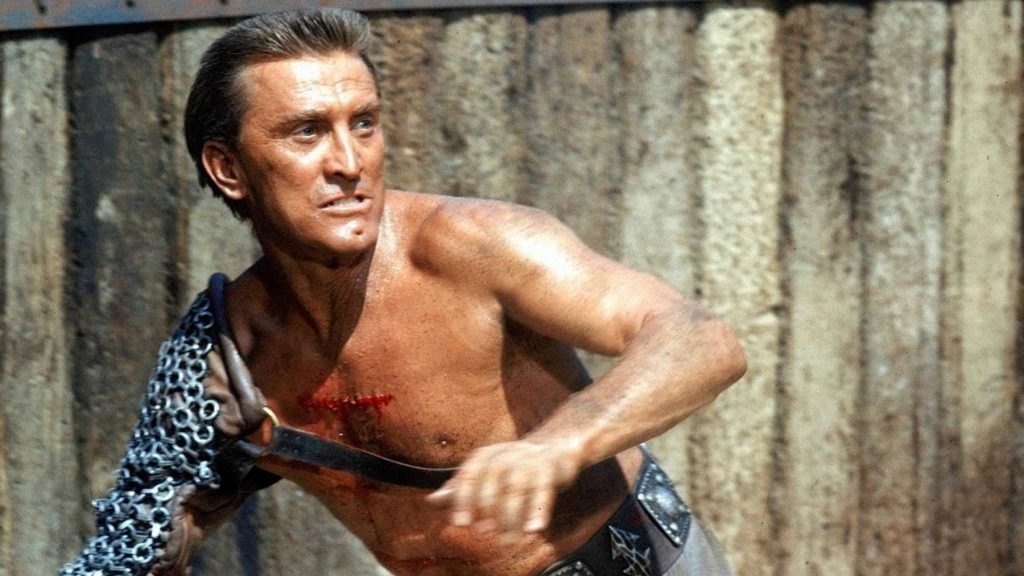 ‘Spartacus’ starring Kirk Douglas in the leading role, is directed by none other than Stanley Kubrick, whom Douglas hired when David Lean and Anthony Mann’s association with the project never bore fruit. Having already worked with Kubrick on ‘Paths Of Glory‘ (1957), Douglas was sure that this was the man who has the ability to bring the Howard Fast novel to life. Douglas plays the titular character in this film, a warrior captured and enslaved by the Roman Republic who then becomes the leader of a slave revolt against the mighty Romans. The screenplay of ‘Spartacus’ is written by Dalton Trumbo, with this being the first film which gave credit to the legendary screenwriter after his ostracization from Hollywood during the McCarthy era. What stands out in ‘Spartacus’ are the brilliant battle sequences and Kubrick’s unique vision when it comes to staging scenes and using light. Douglas as the leading character and Laurence Olivier as Roman general Marcus Licinius Crassus deliver unforgettable performances. 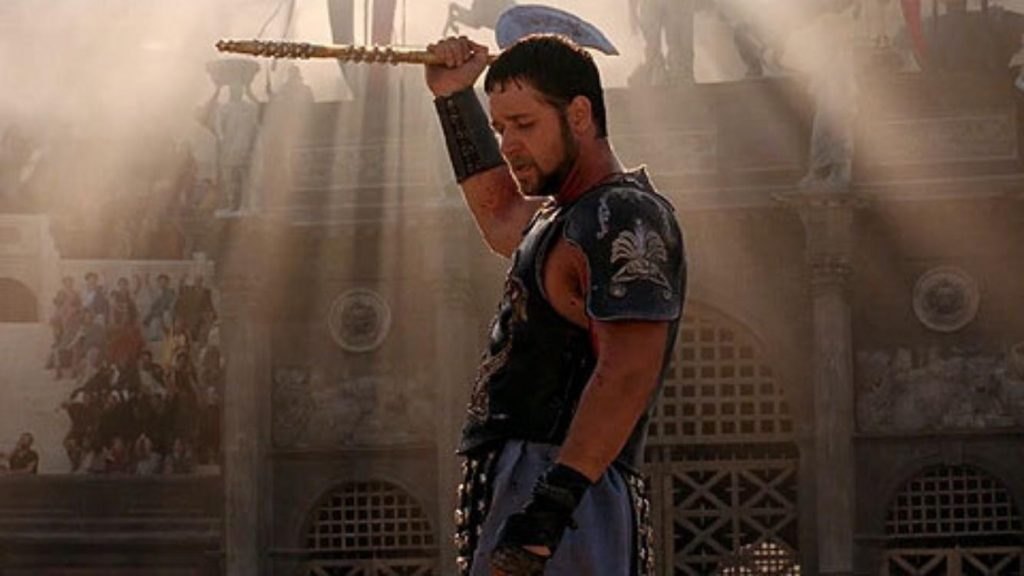 Ridley Scott loves working on genre movies; but he always delivers more than what other films set in similar worlds provide. 2000’s ‘Gladiator‘ is definitely among his finest works, and considering the historical context, it does deserve its place on this list. The central character of ‘Gladiator’, General Maximus Decimus Meridius (played brilliantly by Russell Crowe) is a Roman army general who loses his position in the kingdom after the death of Emperor Marcus Aurelius. Commodus, the new king and Aurelius’ son, arrests Maximus and kills his family because the latter refuses to be as loyal to him as he was to his father. Eventually, Maximus is bought by a gladiator trainer who trains him and takes him to the Colosseum where Maximus encounters Commodus once again. ‘Gladiator’ boasts of some amazing battle sequences which vividly portray the gladiatorial life of ancient Rome. Crowe’s Oscar-winning performance in the film is brilliantly supported by Joaquin Phoenix, Connie Nielsen and Oliver Reed in other important roles. The film fared brilliantly at the Academy Awards, winning five (including Best Picture) out of the 12 it was nominated for. 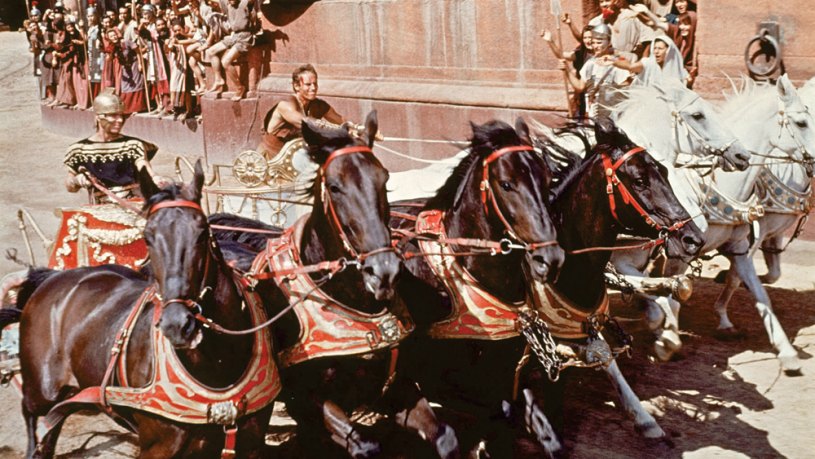 Although it’s not a film about any great warrior, ‘Ben-Hur’ cannot simply be ignored while talking about large-scale historical epic films. Adapted from an 1880 novel called ‘Ben-Hur: A Tale of the Christ’, it was the then-most expensive film, and the scale the movie achieved was hardly matched by any other film made during that period. ‘Ben-Hur’ tells a story of a Jewish merchant who falls out with one of his friends working for the Roman legion due to their political differences. It so happens that during a parade right outside Ben-Hur’s residence, a tile from his house falls on the governor’s head, causing an injury. Despite knowing this was an accident, Ben-Hur’s friend gets his mother and sister arrested and sends Ben-Hur to the galleys to work as a slave. The story then follows Ben-Hur as he goes through many hurdles in life trying to reconnect with his mother and sister.

The film became a huge success upon its release, grabbing 11 Academy Awards in total including Best Picture, Best Director (William Wyler), Best Actor in a Leading Role (Charlton Heston), Best Actor in a Supporting Role (Hugh Griffith), and Best Cinematography. ‘Ben-Hur’ is an experience of a lifetime, and must be watched by true film lovers. We have seen many races in film history, but the grand chariot racing scene in this film hardly has any match.