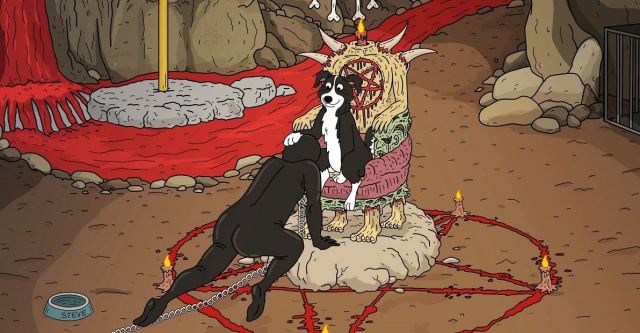 ‘Mr. Pickles’ is Adult Swim’s outrageous and equally funny adult animated series, created by Will Carsola and Dave Stewart. It is about the cutest dog of Old Town, Mr. Pickles, who also happens to be a homicidal Satanist. Sounds good? Well, he additionally has depraved sexual fantasies about his mistress. Pickles is a border collie residing with the Goodman family but most of his time is spent in brutally murdering humans.

‘Mr. Pickles’ originally premiered on the network on September 21, 2014. And we know that “cartoons + adults” is always a grand idea. Take, for example, the grim ‘Rick & Morty‘ and the devastating ‘Bojack Horseman‘ or the philosophical ‘Simpsons‘. Similarly, ‘Mr. Pickles’ also managed to get the same amount of appreciation once it was released. As you can expect, after spanning three seasons, it was renewed for a fourth installment on November 5, 2017 — even before its third season started airing. Read on to know everything about ‘Mr. Pickles’ season 4.

Mr. Pickles Cast: Who’s in it?

Mr. Pickles Plot: What is it about?

All the events of ‘Mr. Pickles’ take place in the small, rustic, old-school neighborhood of Old Town. This is also the home of the Goodman family and their naive, dimwitted 6-year-old son Tommy. The family additionally comprises the absent-minded Beverly and a telemarketer named Stanley. Tommy owns a border collie called Mr. Pickles and as fate could have it, the dog is Satan’s own version in the form of a four-legged furball.

Although Tommy and Mr. Pickles spend most of their time roaming around Old Town, the young boy does not know his pet’s secret. In fact, everybody in the family gets along with Mr. Pickles, except for Tommy’s grandfather. Grandpa Goodman seems to be the only one who suspects the dog’s demonic behavior but his views are always brushed off as crazy fantasies of an old soul.

Meanwhile, unknown to everyone, Mr. Pickles slips away and murders his multiple victims, often resurrecting them and keeping them in an underground lair — where they follow his bidding. Pickles may be a murderous, brutal dog but his methods help keep peace in Old Town — which is otherwise packed with criminals under the scrutiny of the useless, dimwitted sheriff.

In season 3, we witness Mr. Pickles frame Grandpa for murder. Meanwhile, Sheriff comes to know about the old man’s whereabouts and sets off to track him down. On the other hand, Grandpa resolves to finally end this continuous face-off with Mr. Pickles. Season 4 is expected to pick up the story from here and chronicle further adventures of our favorite border collie and his several entanglements with friends, family, as well as villains.

‘Mr. Pickles’ is a well-written show which has its own moments that manage to bring out quite some guffaws. Its satirical tone, fast pacing, and short run-times all constitute the perfect ingredients of a series, curated for the modern generation with short attention spans. And as for the central protagonist, Mr. Pickles is inspired by Dave Stewart’s own female Australian cattle dog. According to Stewart, there are many similarities between his pet and the animated character — with the creator jokingly calling his dog Ms. Pickles. In fact animation director Mike L. Mayfield recorded Stewart’s dog’s movements on video and then the animators used this footage to develop the traits of Mr. Pickles.

Mr. Pickles Season 4 Release Date: When will it premiere?

As far as the next season is concerned, here is the good news. The show was renewed for a fourth season, way back in 2017. ‘Mr. Pickles’ season 4 releases on Adult Swim on Sunday, November 17, 2019 at Midnight ET/PT. Yes, Old Town’s cutest dog is back! Get ready for more tail wagging, flesh ripping, body mutilating, and head decapitating. Mark the dates on your calendar and sit back to enjoy some good, old-school classic American adventure.

You can watch the official trailer for ‘Mr Pickles’ season 3 below. Additionally, you can head to Adult Swim if you wish to catch up on all the previous episodes from the series.