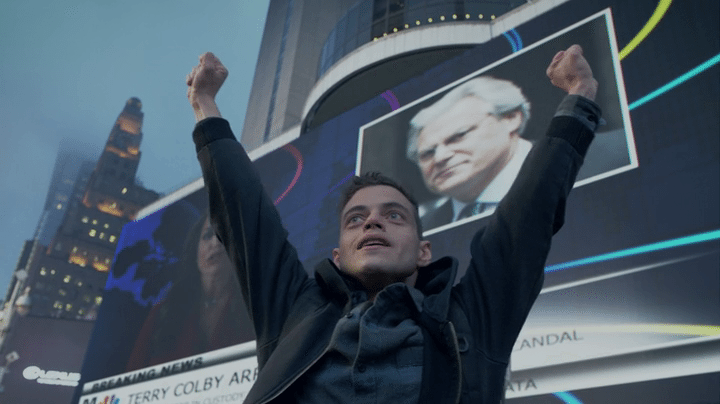 The release date for the final season of ‘Mr. Robot’ has finally been revealed in the just launched trailer. The show will be back on October 6, 2019 on USA Network. The trailer shows Rami Malek as our protagonist, Elliot Alderson, as we watch him prepare for what might be the biggest hack yet. Created by Sam Esmail, the final season of ‘Mr. Robot’ is getting a new slot on Sunday nights instead of the normal Wednesday time slot. Moreover, the fourth season will be the longest in the show yet, having thirteen episodes, which trumps the second season’s twelve episodes.

When the minute-long trailer begins, we do not see many plot points being revealed, but the mood is set perfectly. Scored to a haunting rendition of ‘Silent Night’, we hear Elliot in a voiceover. He declares that it is time to go back to work. Right then, his imaginary companion, Mr. Robot, played by Christian Slater, begins to highlight the dangers that lie ahead. It is followed by a montage of compelling images amidst which we see murder, drugs and perhaps tech running amok. Towards the end of the trailer, Mr. Robot tells Elliot “If you go down this path, it’ll never end. It will always be something else — another symbol to destroy, more people to save. This is an endless war. What you’re about to do is crossing a line.” Elliot responds to it, saying, “It’s a little late for that, don’t you think?”.

Interestingly, Season 4 will see Elliot along with Mr. Robot attempting to target the very top one percent of society, which puts Elliot in the crosshairs of some dangerous parties including Whiterose and the Dark Army, Phillip Price, a ruthless businessman, and E Corp. There are also unknown forces at play which is perhaps why the usually more daring Mr. Robot persona, too, has begun to sound the alarm bells in the trailer.

Notably, Sam Esmail had addressed that the upcoming season would be the last. He also spoke about it being longer than the previous ones, saying, “When I first created the world of ‘Mr. Robot’, I thought it would be a niche television series with a small, cult following. Over the past three years, it has become so much more, and I am continually humbled by the show’s recognition and by the amazing cast and crew that work tirelessly to help bring my vision to life. Since day one, I’ve been building toward one conclusion – and in breaking the next season of ‘Mr. Robot’, I have decided that the conclusion is finally here.”

Since its release, ‘Mr. Robot’ has gained critical acclaim including two Golden Globe Awards. The show also proved to be a starting point for Rami Malek who gained widespread recognition. This year, the actor won Best Actor Oscar for his portrayal of Freddie Mercury in ‘Bohemian Rhapsody‘.

You can watch the trailer for Season 4 of ‘Mr. Robot’ below.