Hulu’s ‘Mrs. America‘ is a mini-series that comprehensively presents the true story of the fight to get the Equal Rights Amendment (E.R.A.) ratified. The series focuses on Phyllis Schlafly, a conservative woman who manages to successfully oppose the amendment from being ratified. By doing so, the Hulu show presents both sides of the fight and also sheds light on the political climate of the time.

One of the most impactful features of the miniseries is how it manages to make its topic feel extremely timely. Its themes are developed meditatively and powerfully. Moreover, the nine-episode miniseries ends on a rather effective moment. However, many viewers would have wondered what the final scene signifies.

A conservative housewife named Phyllis Schlafly fails to advance her political career. When she finds out about the Equal Rights Amendment, she sees it as an opportunity. She uses her mailing list, which mostly comprises of other housewives and, along with a few of her supporters, starts to actively oppose the ratification. Schlafly argues that the E.R.A. would take away women’s “privileges” like being a housewife and not being drafted into the military. Moreover, issues like abortion and LGBTQ+ rights also seep into the debate.

On the other end of the fight are various feminists, including Gloria Steinem, Bella Abzug, Betty Friedan, Shirley Chisholm, Jill Ruckelshaus, and several others. Schlafly starts out as a dismissable actor but soon becomes a prominent political voice. Eventually, in 1980, she lends her support and her mailing list to Ronald Reagan, hoping for a cabinet position. However, Reagan does not give her a cabinet position after his victory since he does not want to lose support from pro-E.R.A. women. Upset, Schlafly cooks dinner, and the series ends with the depiction of her peeling apples in preparation for dinner (featured image).

Many viewers would have wondered what the ending of ‘Mrs. America’ signifies. It is quite a powerful ending, but many might have found it slightly challenging to pinpoint the exact meaning of it. Plus, a lot of viewers would have also missed a witty reference, which makes the conclusion even more impactful. It ought to be noted, however, that after the scene involving Schlafly peeling apples, the final episode also depicts some information in the form of text. However, that is quite straightforward.

The final scene is actually an ode to the critically acclaimed 1975 movie, ‘Jeanne Dielman, 23 Quai du Commerce, 1080 Bruxelles.’ The 1975 film is about a widow who turns to prostitution to make ends meet. However, things take a downturn when she kills one of her clients. However, the real attraction of the experimental movie is its portrayal of the mundane household tasks that the protagonist is shown doing. Viewers are shown Dielman doing the same tasks over the course of three days. Plus, it is perhaps one of the best usages of the literary tool, the rule of three since viewers can immediately notice when Dielman’s actions on the third day are performed differently. 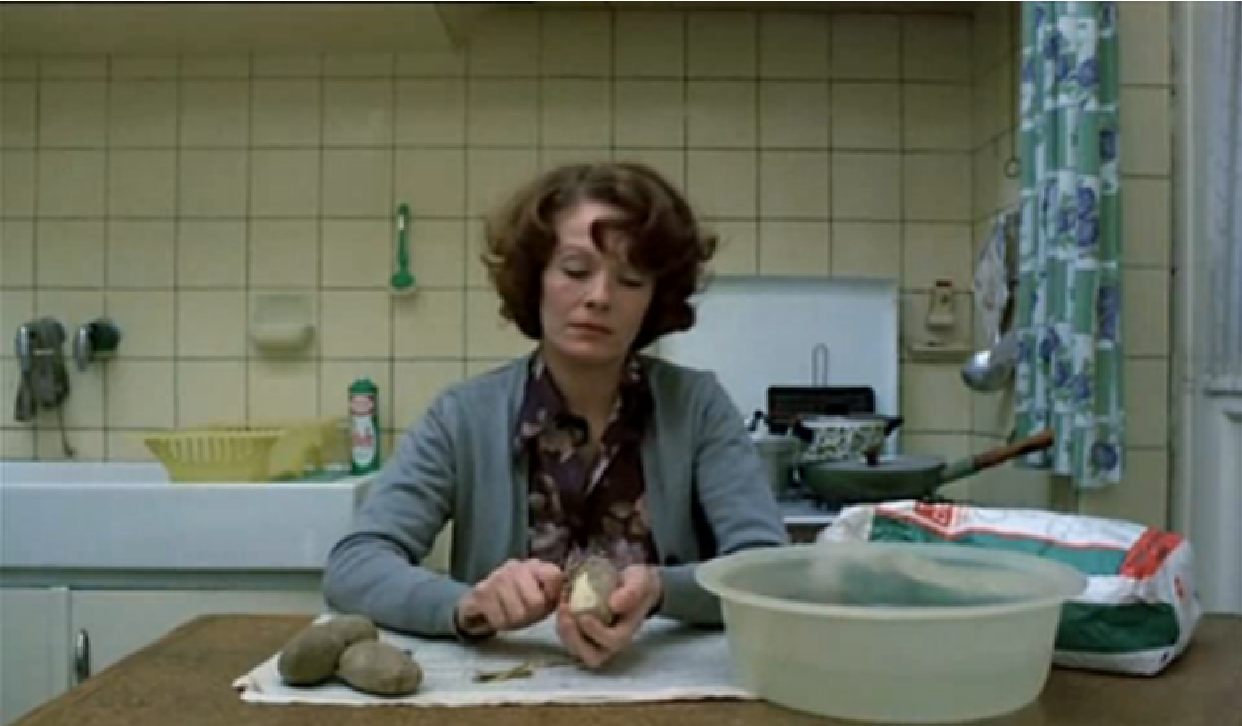 The 1975 film highlights the trappings of a woman’s expected role of performing household work. In ‘Mrs. America,’ this scene is referenced to highlight how Schlafly, despite successfully opposing the E.R.A. ratification, finds herself trapped in the patriarchal role of a woman. She fights the battle to stop the E.R.A. ratification in order to defend a woman’s “privilege” of being a housewife. However, she is the one who aspires to escape the trap/prison of being a housewife. The usage of the reference was confirmed by the series’ creator Dahvi Waller, in an interview with Slate.

It is integral to note here that she is not really choosing to be a housewife since her frustration is apparent. She is forced to be one because she has internalized the misogynist demands of society that she herself had been defending. By not getting a cabinet position, she is forced to recline to being a housewife. Her fight to stop the E.R.A. ratification had been no lesser than a job, giving her the “excuse” to not do household chores.