‘Mrs. America‘ is a Hulu miniseries that revolves around a conservative woman, Phyllis Schlafly‘s fight to stop the Equal Rights Amendment (ERA) from getting ratified. An intensely political piece, the period tale presents a truly comprehensive and inclusive picture of the second wave feminist movement. As viewers would know, each episode revolves around a different figure who had been involved in the ERA ratification battle. The seventh episode focuses on Bella Abzug, a pivotal character played by Margo Martindale.

The seventh episode begins with Phyllis Schlafly speaking in front of her supporters against President Carter and about her new book, ‘Power of the Positive Woman.’ A server at the launch smashes cake on Schlafly’s face. 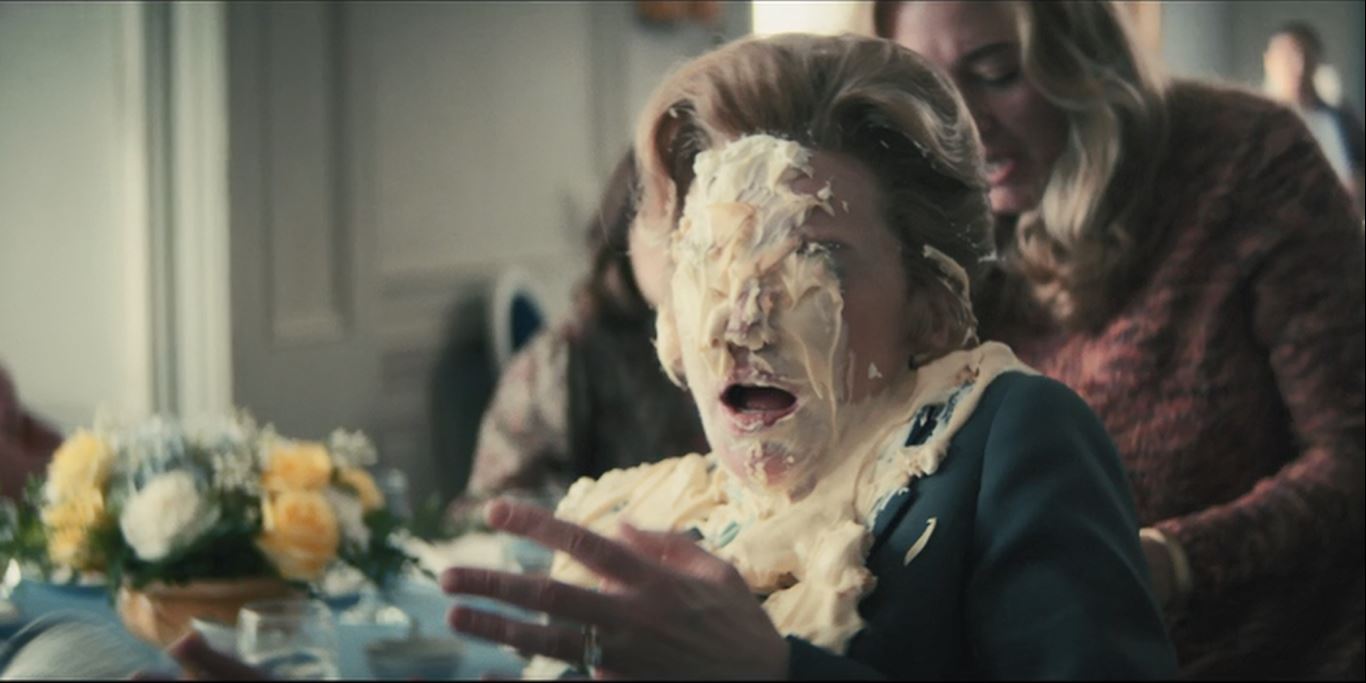 On the other hand, Bella has lost a Senate election. Gloria visits her house to show support, along with the first female assistant to the POTUS, Midge. Midge tells Bella that she has convinced the President to resurrect a National Convention for Women that had been started by Bella. Carter wants Gloria to lead it.

At a meeting, Bella floats the idea of inviting Betty Friedan to the convention, but the others disagree because of her homophobic views. Meanwhile, Schlafly discusses a plan to disrupt the convention. The group decides to get as many of their supporters to be elected into the convention to tilt the numbers in their favor. Schlafly’s supporters want Schlafly to stay low for a while due to her injury (because of the cake-smashing), which could make her a target.

Schlafly makes Rosemary lead the disruption plan. Rosemary suggests making another organization with her as its leader so that people can’t trace the convention disruption directly to the Eagle Forum. The Citizen’s Review Committee is formed, and they burglarize Bella & co.’s South Carolina office. Bella, Steinem, and co. figure out that the CRC is linked to Schlafly. Bella decides to go to Illinois to give a speech, in order to challenge Schlafly’s support there since Schlafly’s supporters are increasing in numbers and winning. Bella’s supporters do not think its a good idea.

The Schlaflys take a family photo. Eleanor ends up calling Phyllis’ daughter, Phyllis Jr., “Liza.” Phyllis Sr. finds out that her daughter is embarrassed by her name. Liza/Phyllis Jr. tells her mother that she is embarrassed at her college (Princeton) for being an ultra-conservative woman’s daughter.

Bella comes to Illinois. Schlafly is expected to be at the convention to give a speech. However, she is in her room, upset. When Eleanor goes to console Schlafly, the latter implies that she shouldn’t spend Thanksgiving with her (Phyllis’) family. Schlafly does not show up at the convention.

Upon her return, Bella gets urged by Gloria to kick Schlafly’s people out of the convention. However, Bella does not think its a wise idea. On the other hand, Phyllis opens her daughter’s package, which contains a mix-tape/compilation. She gets an idea and makes a compilation of liberal women’s speeches, taking their words out of context. She uses the compilation to get more supporters.

Bella tells her supporters that they should take the issue of gay rights out of the convention floor. Midge is unhappy about that. Bella’s team exposes how Schlafly’s group is involved with the Klu Klux Klan. On the other hand, it is revealed that Rosemary and others in Schlafly’s inner circle won a seat at the convention. Schlafly did not because she didn’t show up.

Bella goes to meet Betty. Then, she goes to meet Gloria. She tells Gloria how she had to sleep disguised above a brothel when she had gone to Mississippi to fight the McGhee case (an African-American man accused of raping a Caucasian woman and sentenced to a death penalty). She had been eight-months pregnant then and had lost her baby due to the stress. Bella tells Gloria that she is going to keep gay rights on the convention floor. Gloria tells Bella that they should invite everyone, including Schlafly’s supporters, even if it could be risky.

Convention invitations are sent to everyone, including Schlafly’s supporters, Betty, Ruckelshaus, and others (featured image). On the other hand, Schlafly calls Hobbs (the leader of the WWWW) to tell her that they should organize a “pro-family” rally to oppose the liberals at the national women’s convention. Furthermore, Schlafly says that they should have the rally without any banners or signs so that any faction can join (including white nationalists). Schlafly thinks that if the rally is successful, it would be a death blow to the women’s movement. “Let’s blow it up,” she says.

Abzug was often criticized for her outspokenness. Hence, it is fitting that the episode revolving around Abzug is the most charged one of the series. The seventh episode of ‘Mrs. America’ proves to be the best episode of the miniseries so far. To begin with, the battle between Abzug’s team and Phyllis’ team proves to be an intense cat-and-mouse game. Bella is shown to be on top of her game while Schlafly manages to come out on top of her worries. In doing so, the episode depicts their battle to be a highly engaging fight of equals.

‘Mrs. America’ has displayed exceptional command over the portrayal of the political landscape of the ’70s. This episode further bolsters that portrayal. The various forces, ideologies, and actors are depicted fittingly with minimum exposition: a style that proves to be more effective. Moreover, the story progresses with lightning pace when it comes to how much time is “skipped over” quickly. However, the effect of the time passed is also shown authentically. For instance, it is interesting to see Betty Friedan’s influence having reduced. Such depictions are executed deftly.

Lastly, the episode sets up the next one rather brilliantly. “Let’s blow it up,” Schlafly says towards the end, making viewers impatient to watch the imminent “showdown” in the eighth episode.

Read More: Who Was Bella Abzug?