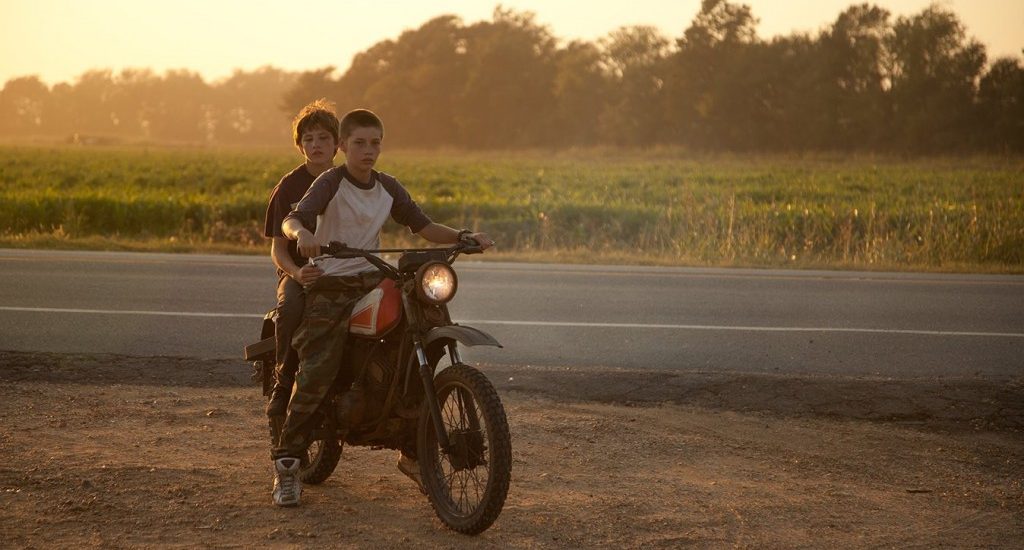 Written and directed by Jeff Nichols, his third feature ‘Mud’ is a coming-of-age drama film that evokes the charm and nostalgia of a Mark Twain story. Set in rural Arkansas on the Mississippi riverbanks, ‘Mud’ follows the touching story of two 14-year-old boys who find and befriend a fugitive of the law, learning important lessons about friendship, family, and love along the way. Matthew McConaughey is terrific as the titular Mud, while Tye Sheridan and Jacob Lofland are also impressively noteworthy as the two young lads in search of an adventure. ‘Mud’ is the kind of film that makes a lasting mark and stays with you long after it has ended. If you’re looking for more insight into the film’s ending and what it means for the characters, you’ve come to the right place. Let us take you through a short summary of the movie first before we get into details about that hopeful ending that feels like a new beginning. SPOILERS AHEAD.

Ellis and Neckbone are best friends who live in a small riverside town in rural Arkansas. One day, the boys take a boat out to a remote island in the Mississippi where they find a small cabin cruiser miraculously stuck high up in a tree. Thinking that the boat was maybe carried to the tree by a flood, the boys decide to claim ownership of it, to use as an instant treehouse, before they find that someone else is already living there. A man – dirty, rugged, and seemingly dangerous – has been squatting in the boat. His name is Mud and he is apparently waiting for the love of his life to join him there so that they can run away together. The more the boys talk with Mud and listen to his captivating stories, the more they find themselves taken by Mud’s charm and romantic persona. 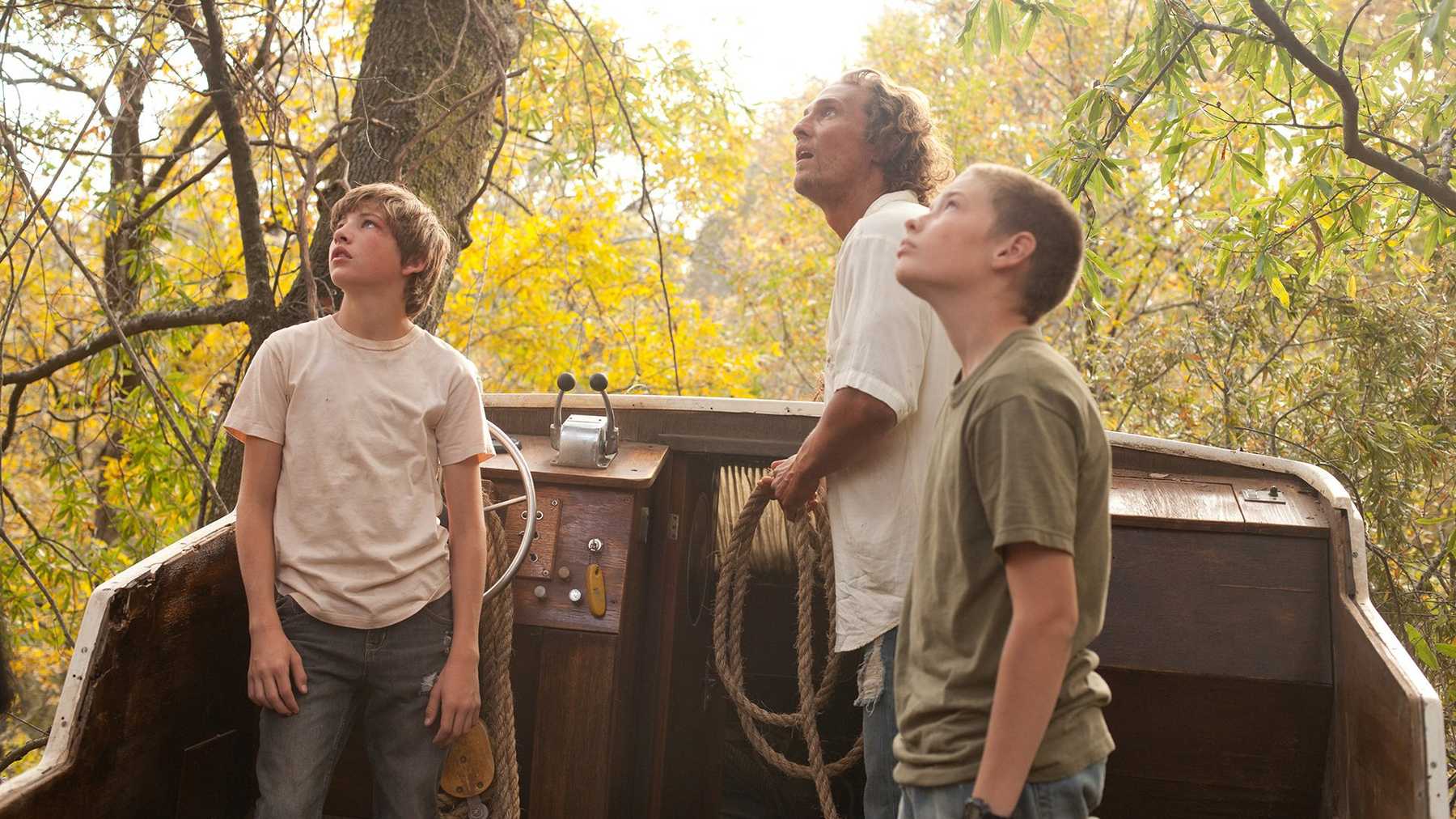 Ellis and Neckbone start by bringing the starving Mud cans of food but soon he has them doing heftier tasks and errands. Ellis, whose parents are on the verge of a divorce, connects more deeply with Mud, taking him at face value and drawn by Mud’s devotion to his true love, very unlike Ellis’s own parents. Learning that Mud is on the run because he has killed a man who impregnated and then beat up Mud’s childhood love Juniper, the boys decide to help Mud reunite with Juniper and escape together. They do this by assisting Mud with the boat’s repairs and by running messages back and forth between Mud and Juniper. But when Ellis finds out that Mud and Juniper’s devotion to each other has limitations, he becomes disillusioned with the very idea of romance and commitment, especially as he gets his own heart broken by the girl he likes.

Mud Ending: Is Mud Killed in the Shootout?

After rushing Ellis to the hospital and stealing a last look at Juniper, Mud returns to the island and gets the boat onto the water successfully. Neckbone then brings him to see Ellis at his home so that he can say goodbye before leaving forever. Carver and his posse of bounty hunters enter Ellis’s home and start shooting up a storm. Ellis’s parents are stuck in a closet, unable to reach him, but Mud makes sure that Ellis remains hidden and out of harm’s way. Tom Blankenship helps by taking out several attackers with his sniper gun from across the river. Mud saves Ellis and is trying to get away but Carver shoots him and Mud falls into the river, hit by the bullet.

The police arrive to find all the attackers dead. One of the state troopers recognizes Carver’s body and calls King to tell him of his son’s death. A few days later, Ellis watches from a distance as the River Authority demolishes his former home. Neckbone tells him that the police never found Mud’s body in the river which means there is a chance he might have escaped. Ellis’s father drops him off at the new place, an upscale apartment complex in town, and asks him to take care of his mother. Mud is shown to be alive and recovering, on the way to freedom with Tom. They are on the cabin cruiser, at the mouth of the Mississippi River, steadily making their way to the Gulf of Mexico. 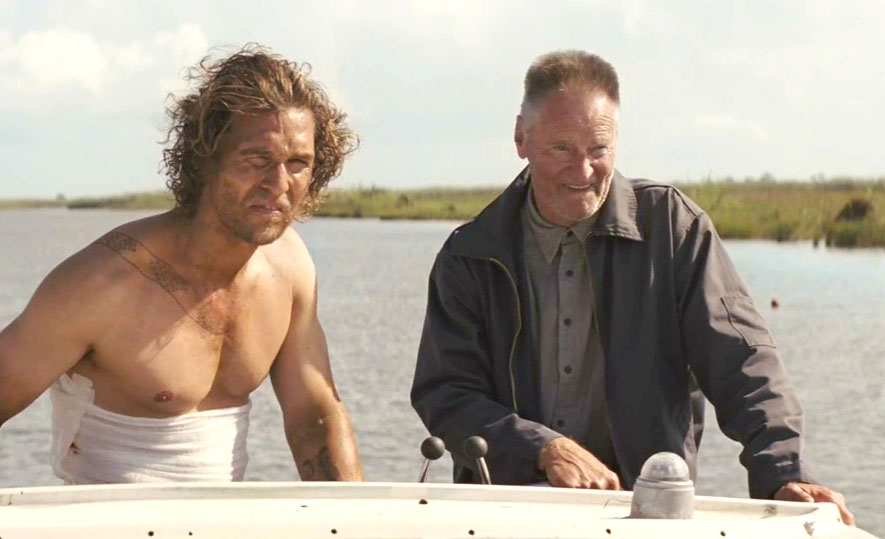 The film’s end is a happy one and feels like a fresh beginning. Even though Ellis is unsure about Mud’s fate, he is hopeful that his friend survived. With the move to the new neighborhood, Ellis sure has a lot to look forward to since he sees a bunch of beautiful older girls living in the same building. For Mud himself, the end is bittersweet because even though he does manage to escape, he has to break up with Juniper.

What Happens to Juniper?

Juniper loves Mud. Any doubt we may have had about this is cleared when we see her distraught over Mud’s break up note. But her love is not of the same intensity as Mud’s is. Mud has no qualms about killing a man who harmed his beloved Juniper, but she cannot bring herself to run away with him and spend the rest of her life hiding from the law. She knows that she is wrong to string Mud along and therefore tells Ellis to let Mud know that she understands why he is breaking up with her. Juniper’s character is somewhat reminiscent of Jenny Curran from ‘Forrest Gump’. But the ultimate choice she makes is different here – Juniper chooses to let Mud go instead of holding on to him. She is visibly sad about her decision but the film’s ending does not show what really happens with Juniper. The last we see of her is when she sees Mud from afar and waves a final goodbye, before the shootout. 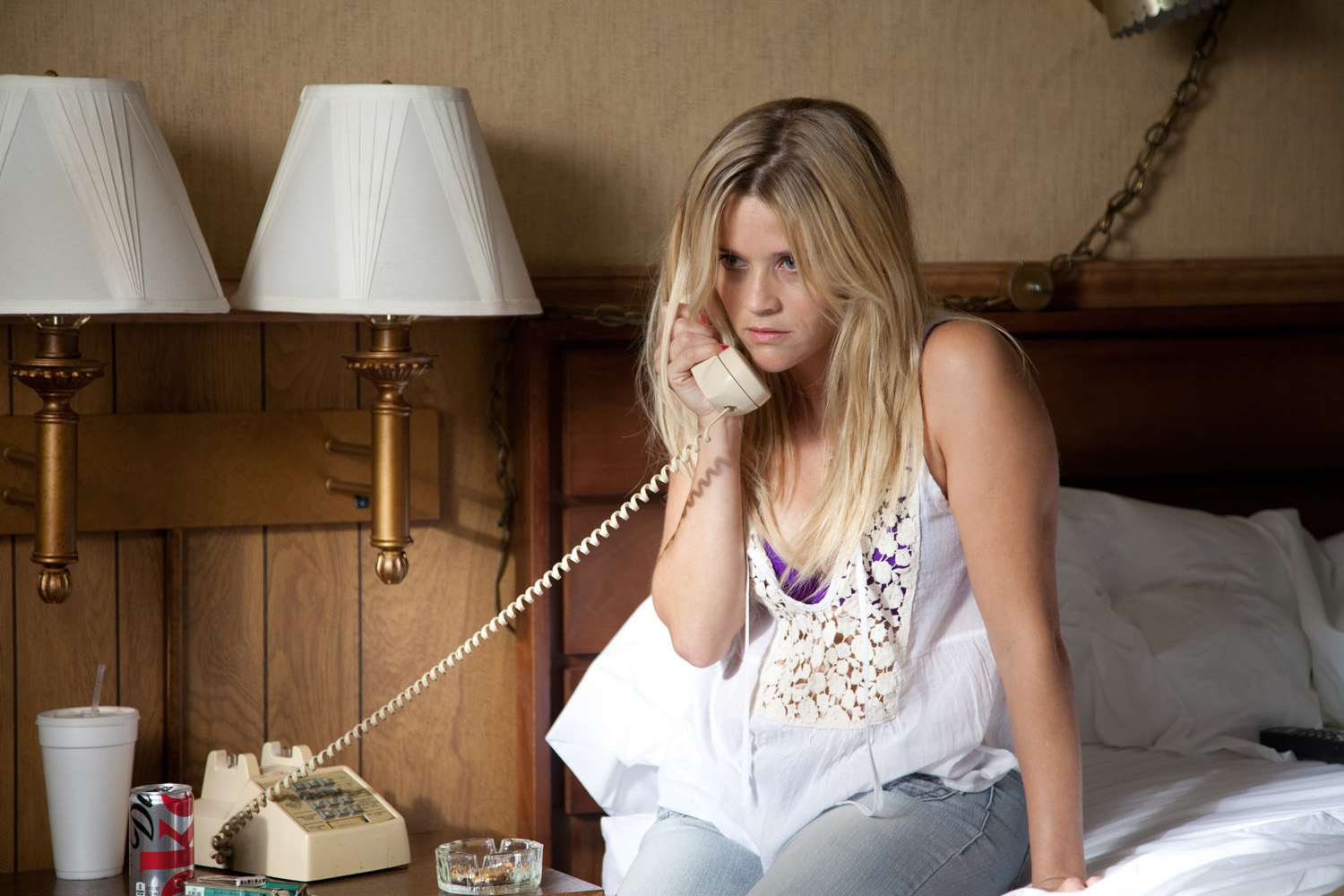 Why is Ellis Angry at Mud?

Ellis is at a turning point in his life when he meets Mud. Everything is changing around him – he is growing up and his parents are growing apart. Ellis is entering that stage of his life when young adults start becoming aware of the notion of romantic love and one of the first people they look up to, to emulate, are their parents. At 14, Ellis is trying to define love and find its place in life – is it all-consuming like Mud’s is, or is it a burden like his parents’ is, or is it a convenience like Juniper’s is? When Ellis gets publicly dumped by the girl he presumes to be his girlfriend, he is hurt and angry, and he aims that hurt and anger at Mud, who he had taken on as a sort of mentor, charmed by Mud’s unswerving and seemingly undying love for Juniper (so different from his parents’, who are all but separated). So when Ellis finds that even Mud’s love has its limits, the disillusionment makes him feel as if he has been betrayed by his friend. 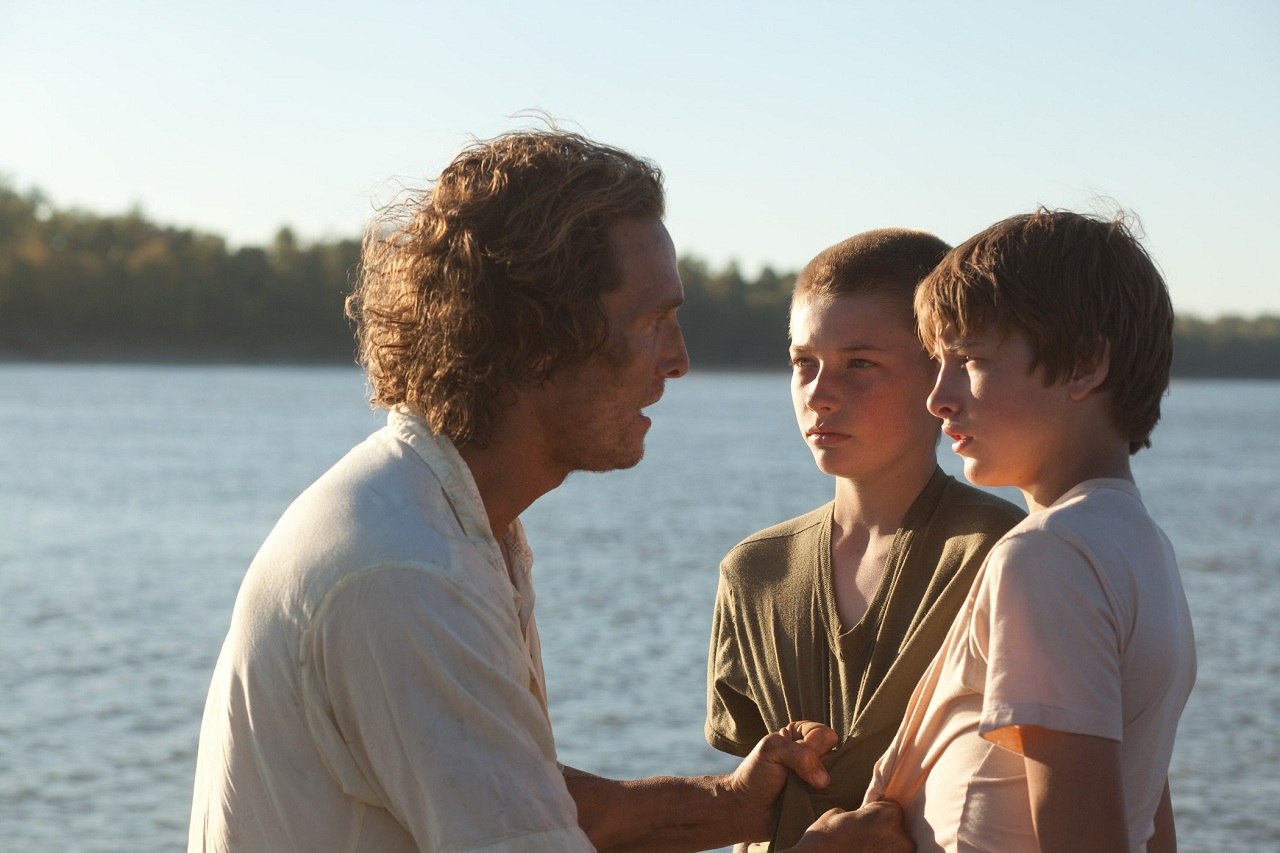 Does Tom Love Mud as a Son?

In the initial 10 minutes of the film, it is established that Tom Blankenship, Ellis’s neighbor across the river, is a loner. Mud confirms that Tom has been by himself ever since his wife died years ago. Even though he prefers his solitary existence, Tom sacrifices that and the comforts of his home to save Mud and run away with him. Tom says he found Mud in the forest as a child, utterly alone, and took him in. Although it’s not stated explicitly, it can be assumed that Tom raised Mud and therefore thinks of him as a son. So it makes sense that Tom chooses to do what Juniper couldn’t and leave everything behind to live life as a fugitive with Mud. Making that big of a decision is outside the scope of just plain friendship and proves that Tom loves Mud as his family.