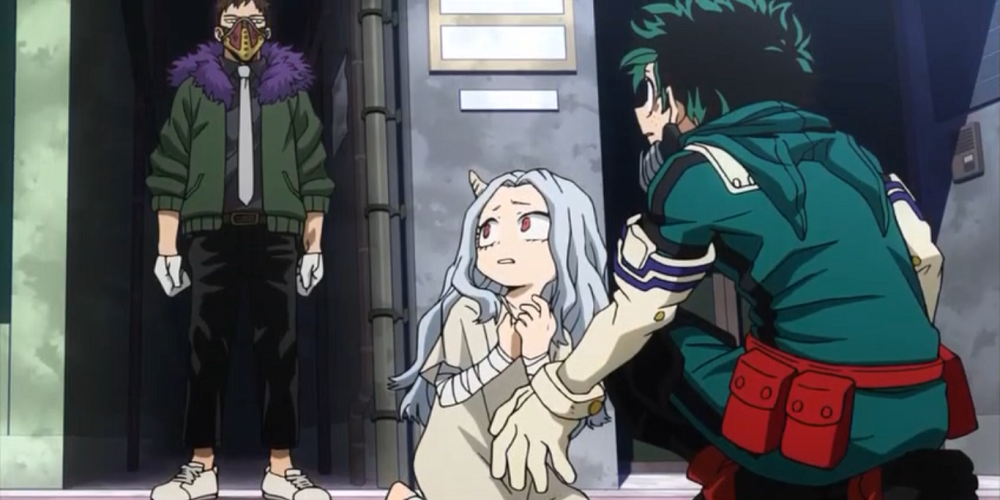 Episode 2 of ‘My Hero Academia’ took a grim turn and since then, as viewers, we’ve known that things will never be the same. With the introduction of Overhaul, the future of the series gets murkier and what lies ahead is the bleakest arc yet. Unexpectedly though, with episode 3, it still plays along with the buoyant themes of the series instead of plunging right into everything that it had promised in the previous episode. Episode 3 is more focused on the work-study which was just briefly introduced earlier and with a comic approach, this episode shows how Midoriya struggles to prove his true worth.

Some might dismiss this episode by calling it another filler that’s just trying to delay the best parts of the season. But very subtly, the anime is actually laying a solid foundation for what lies ahead. That being said, considering its current pace, this might just be one of the last few light-hearted episodes of the season as gradually, we’re heading towards a rather dreary part of this anime. Titled “Boy Meets…”, episode 3 may not be as action-packed and disturbing as its predecessor but it does hold a lot of significance in the overarching plot.

Somewhere around the end of Episode 2, Midoriya pulled off the perfect metamorphosis of All Might’s face just to make Night Eye laugh. But instead of finding it funny, Night Eye, who holds All Might in high regard, gets offended by the fact that Midoriya is making fun of him. With a stern look on his face, Night Eye slowly walks towards Midoriya and examines his face. He then complains about how Midoriya has not been able to perfectly imitate All Might’s face and has failed to acknowledge the correct size of his wrinkles. Disappointed, he turns away and dismisses Midoriya’s proposal.

Trying to turn things around, Midoriya tries to convince him that he tried to impersonate All Might’s face from the “vinegar riverbank incident”. Losing themselves in their fanboyism endeavors, an impassioned conversation sparks between them where they start discussing All Might’s greatness. This gets Night Eye’s attention and but before approving Midoriya for the work-study, he challenges him to steal the approval stamp from him in a limited span of three minutes. Midoriya, for obvious reasons, goes all in and gives it everything he’s got to somehow get his hands on the stamp. But Night Eye, whose quirk allows him to foresee all the moves of his enemy, is easily able to defend himself from all of Midoriya’s attacks.

Soon, though he does get close, Midoriya runs out of time and he falls to the ground with a bleeding nose. But this is when Night Eye realizes that despite being extremely desperate in that situation, Midoriya avoided touching any of his All Might collectibles. Though he still questions All Night’s decision of choosing the boy as his superhero descendant, he sees something in him and takes him in for a work-study. Meanwhile, at the academy, while some young heroes of the UA struggle to find legit work-study superheroes, some of them get to work under some of the greatest names like “Hawks”. Somewhere around the end, Night Eye tells Midoriya and Mirio about Overhaul who is starting to take the entire world of villains by storm.

Just like the Pilot, even this episode seems rather uneventful as it only repeats all of its references to Midoriya’s journey of self-actualization and how he is determined to prove that he is indeed the true descendant of All Might’s legacy. But if you think about it, even Mirio’s personality and traits do come in tandem with the textbook definition of a superhero. So considering Midoriya’s current hold on his powers and abilities, it’s quite questionable if he is truly worthy or not.

That being said, this also lays some ground for the future of the anime’s narrative. So far, since Midoriya is the protagonist, the series is more inclined towards the idea of presenting a hero who is not at all strongest but does present himself as a brave symbol of peace. So from the looks of it, as Midoriya’s character will get a better understanding of his own quirks, even his overall character writing will relatively change.

Along with its witty gimmicks, the episode also subtly introduces a few characters who will certainly play a very significant role later on. It makes a minor reference to “Hawks” who is the third-ranked hero and will now be taking Tokoyami under his shadow for the work-study.

The best and the most shocking part of this episode is, of course, its post-credit scene where Midoriya runs into Eri for the first time and even comes face to face with Overhaul. Though I knew that, sooner or later, Midoriya will cross paths with Overhaul, I could have never guessed that it would happen so soon. All in all, Season 4 of ‘My Hero Academia’, with its almost perfect pacing, seems to be plodding in the right direction so far and with each episode, it’s just preparing us for its crescendo.