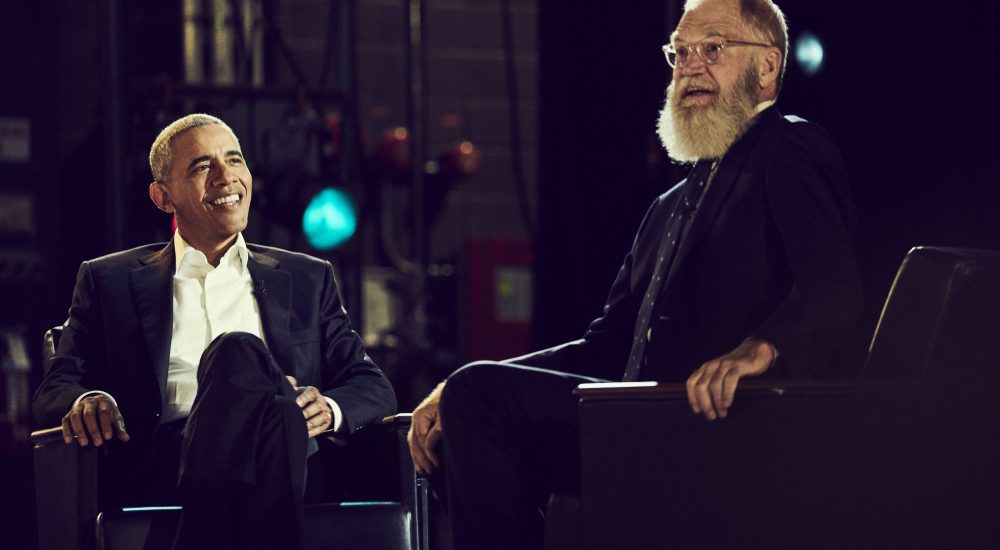 The interview talk show is set up inside as well as outside studio setting. The guests in the first season included Barack Obama, Howard Stern, George Clooney, Tina Fey, Malala Yousafzai as well as Jay-Z. There is only one celebrity guest per episode and Letterman is free to ask them any questions at hand.

Letterman’s fame as a talk show host is enough to be a crowd puller, not to mention the several high profile celebrities that he has on the show. This coupled with the easy accessibility and wide outreach of Netflix has made this series very popular and it has amassed quite an impressive fan following within a short time span. In fact, critics too have praised this show, saying, ” ‘My Next Guest’ may not be groundbreaking, but a more intimate setting provides ample room for intelligent, insightful interviews with interesting subjects that go beyond standard late-night conversations”.

My Next Guest Needs No Introduction Season 3 Release Date: When will it premiere?

My Next Guest Needs No Introduction with David Letterman season 2 premiered on Netflix on May 31, 2019. Both seasons have received extremely positive reviews. Rotten Tomatoes gave the show an 83% approval rating. The website’s critical consensus goes, ” My Next Guest may not be groundbreaking, but a more intimate setting provides ample room for intelligent and insightful interviews with interesting subjects that go beyond standard late-night conversations.”

The familiarity of David Letterman, his wit, humour, and iconic presence is something that propels the show. The show was announced for nomination for the Primetime Creative Arts Emmy Awards. Considering the overwhelming response after season 2, we are sure the show will be renewed again, but as of now we just have to wait for any official statement. However, we can expect My Next Guest Needs No Introduction with David Letterman Season 3 to release in sometime in October 2020 or later.

It was announced back in May 2019 that a stand-alone special featuring Bollywood actor Shah Rukh Khan would be released later in the year. Following a trailer release on October 22, 2019, the special released on October 25, 2019, on Netflix.

My Next Guest Needs No Introduction Cast

The main cast of ‘My Next Guest Needs No Introduction with David Letterman’ keeps changing since each episode has a separate celebrity guest. The only constant is Letterman himself, who does not need any introduction. The veteran talk show host moves effortlessly through each episode, and it is no wonder that he has influenced some of the greatest talk show hosts we have seen including  Conan O’Brien, Stephen Colbert, Jimmy Kimmel, Jimmy Fallon, Seth Meyers, and John Oliver.

The guests in the first season were Barack Obama, Jay-Z, George Clooney, Malala Malala Yousafzai, Howard Stern, Tina Fey, among others. The second season has guest celebrities like Kanye West, Tiffany Haddish, Ellen DeGeneres, Melinda Gates, and Formula 1 race driver Lewis Hamilton. Notably, it should be mentioned that Paul Shaffer, the longtime collaborator with Letterman returned as the composer of the show in season 2.

What is My Next Guest Needs No Introduction About?

‘My Next Guest Needs No Introduction with David Letterman’ is about Letterman interviewing people that he finds fascinating. The show starts with an interview with former president Barack Obama. He is seen walking with the civil rights legend, John Lewis at the Edmund Pettus Bridge. In the next episode, he interviews George Clooney outside of LAX. They are seen eating food and watching planes land.

Clooney talks about his career, his life growing up in Kentucky and his acting experience. He is seen with his wife Amal Clooney who is a human rights lawyer. They go to Clooney’s place to meet the Iraqi refugee Hazim Avdal. Letterman also interviews Malala Yousafzai who was leading a group at Lady Margaret Hall, Oxford. She has won a Nobel Peace Prize after the gruesome Taliban attack. She tells her life’s goals and shows her new home. Letterman follows the tour group. They also eat lunch with Yousafzai’s father and explore Oxford’s shops.

Letterman is also seen visiting Shangri La Studio and meeting Jay-Z. Jay-Z talks about his past, how his family struggled, and the racial injustice he had to face. David also visits the legendary studio of Rick Rubin and listens to Madison Ryann Ward recording. David meets Tina Fey and eats chicken and fries at the Athenian Room which is one of the favorite places of Tina in Chicago. Tina talks about her parents, her life growing up in Chicago and how she learned from her mistakes. In the last episode, he interviews Howard Stern. David rides on horses at the Grand Staircase-Escalante National Monument accompanied by Christa Sadler. Stern also talks about the time when he interviewed Donald Trump.

The Rolling Stone surmised the show saying that Letterman was back to his old ‘cranky Dave’ persona and while the interviews were not specifically pointed or hard-hitting, they were not idle banter either: “Letterman’s always been the workaholic, and his life’s work happens to be conversation. What sports cars are to Jay [Leno] and Jerry [Seinfeld], grouchy throat-clearing is to Dave. So My Next Guest is an ingenious way for him to get back to work, with no pressure to entertain and no pretense of starting a new career. And with its ornery edge, it definitely feels like vintage Dave”.

Hopefully, in the upcoming season, the show will continue in a similar manner and we will get to see more of the vintage Letterman who rose to fame and made him one of the most recognized names in the talk show business. Hopefully, the interviews will remain as topical and funny, giving this series an edge and drawing viewers to it.

My Next Guest Needs No Introduction Trailer:

The trailer for ‘My Next Guest Needs No Introduction with David Letterman’ Season 2 below. Check it out.